GOVERNMENTS HEED TO THE PLEAS OF WOMEN & CHILDREN : IF NOT TO THE H.C.

OR AT LEAST TO ACT ON PAST EXPERIENCE AFTER THE SECOND CLUSTER OF CASES -THE KOYAMBEDU CLUSTER . WE CANT AFFORD FOR A THIRD ONE CALLED TASMAC CLUSTER.EVEN THE SUREME COURT NOT TO HEAR THE CASE OF T.N’s APPEL AGAINST H.C. Order .

Let us see how the citizens will be hurt when Liquor outlets are opened .

i)Domestic Violence : There is already cases reported of Domestic violence by men. Yes men have no jobs , no money , want to drown in Euphoria . How is it possible , ill treat women & children at home. – DOMESTIC HARMONEY IS IMPORTANT FIRST , STATE REVENUE WILL FOLLOW PROVIDED THIS IS GUARANTEED.

ii)Domestic revenue & reserves dwindling : When there is no income / adequate income the reserves at home like jewels Bank deposits are tampered – THAT DOESN’T SPEAK OF GOOD OF THE GOVERNMENT .

iii) Spread of the Virus : The rate of spread has gone up making Governments to Shutdown to arrest first by avoiding crowded gathering . A spiritual minded state where there is a practice to gather in groups at different worship places follow the dictum of the states stop such to prevent the Pace of the Spread . – THEN WHY CREATE UNRULLY CROWD TO PROMOTE THE SPREAD OF VIRUS .

iv) Sexual Violence against Women & Children inside the house: India hasn’t lagged far behind other countries in this sphere -. BUT WHY GIVE AN OPPORTUNITY TO THE HAWKS TO DESTROY THE YOUNG ONES , MINORS AT HOME ?
There has been Advice , warning , Protests from various Authentic Quarters. The Health Authorities , Women’s Groups , Legal Luminaries and Elders ; all others like seeking Liquor revenue are trying to escape from reality. This will lead to a situation like “A DOG TRYING TO ESCAPE THE NOOSE OF THE DOG CATCHER ” – the more the dog tries to run away (escape) the noose gets tightened more . on the contrary If only the dog tries charging head on the’ dog catcher’ the noose will still be loose and it will be possible to wriggle out .

WE ARE ALL WORRIED ABOUT THE RISING CASES YET READY TO COOPERATE ; KINDLY DONOT INCLUDE ONE MORE AREA FOR ANOTHER SPATE OF SPIKES .

We all await the S.C.'s order when it meets on th May .

A cursory look will give an idea about the gathering crowds that can be matter of grave concern for the citizens who are law abiding and cooperative. more 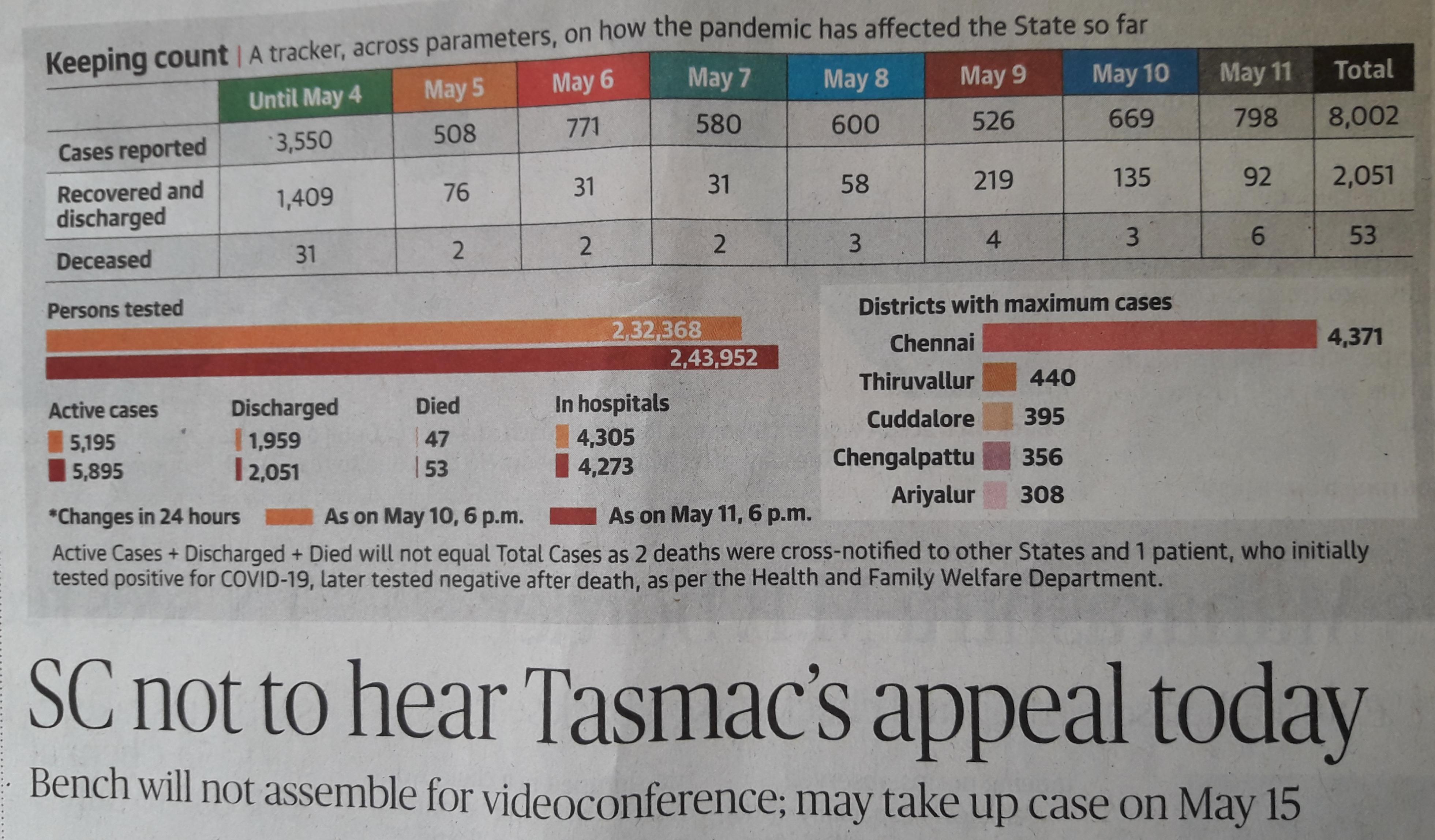 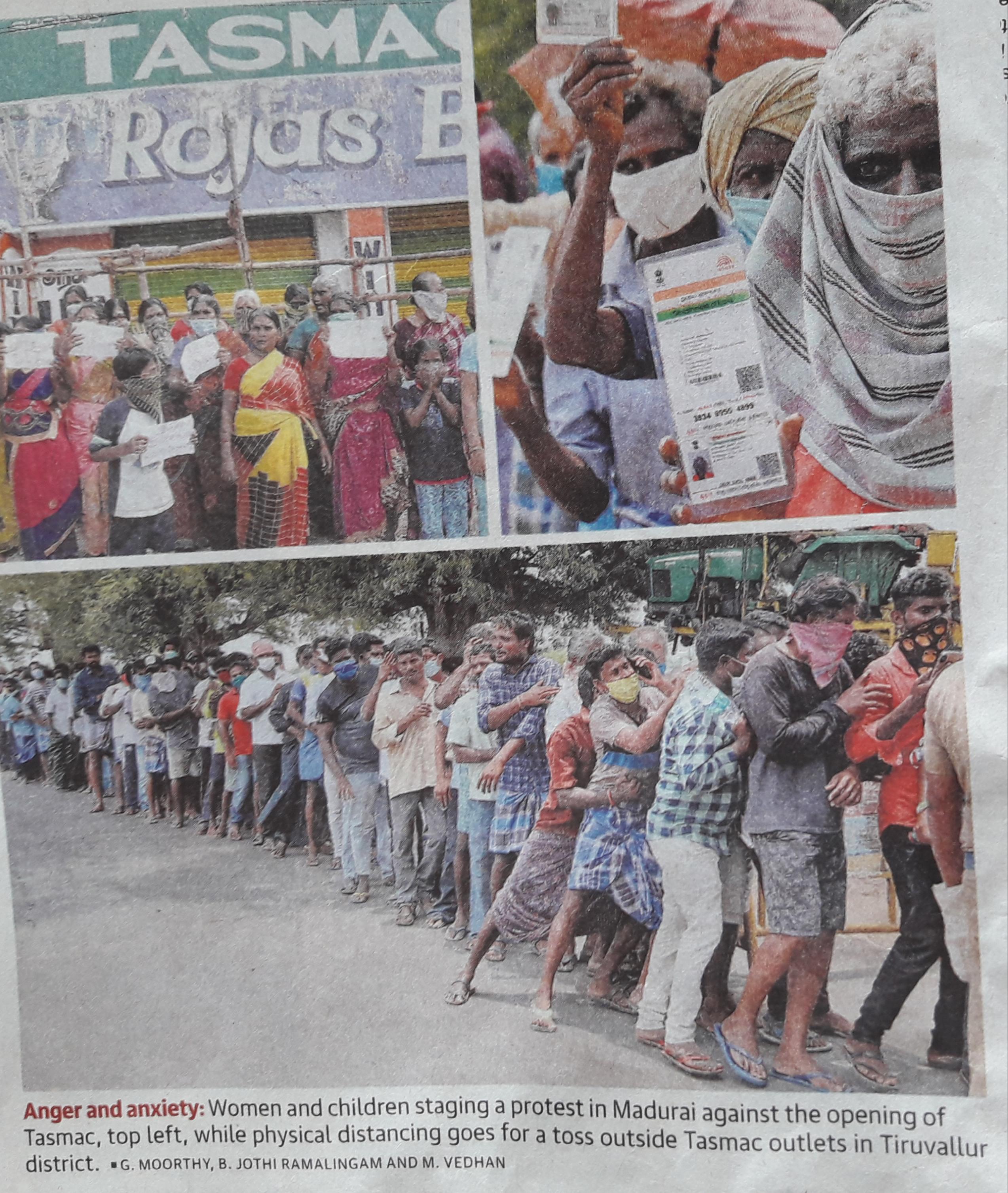 Helpful Residents of Tamil Nadu May 12
Viewed by 412

Jayakumar Daniel (2048 , 5th Street , Jothi Apt...., Tour Organizer , With PG Dip. In Yoga, Practitioner & Helper .)
Yes many Medical Experts had started saying that Covid19 has come to stay not only in India but all over the Word . It is to be any other pandemic , Epidemic we have face faced .

That doesnt mean that we can throw cation to the wind . The Government has the control with it to open the right type of activity . As mass gathering in Theatres , Religeous places are still under Control , TASMAC outlets should also be opened with extreme caution following the distancing norms . more
May 13

RV Varada Rajalu
Every thing said and done is easy but who has to follow the social distance ( The Public) Therefore this has to be imbibed in their culture when that is lacking what can the Police do. he Police has to use the iron hand and be strict. Some Places they should have sealed the TASMAC shop by seeing the unruly crowd. But every one was happy what for they know better.Sudden spurt of such activities are expected therefore follow the rules. Not a single TASMAC shop followed the process enumerated in the Court Order Why Some hidden agenda is there. This should stop. Then only we can have fair game. more
May 12

Ramachandran Venkataraman
The virus has entered the human race it would be difficult for total eradication as we do not have any self discipline in public places. more
May 12