So, what is "new" in the latest lockdown rules?

I have been trying to understand what is that at least one point difference in the latest lockdown rules (may 10 to 24) and the previous one, but have not been able to figure out. If any of you can help me (just for my learning), please do so. more 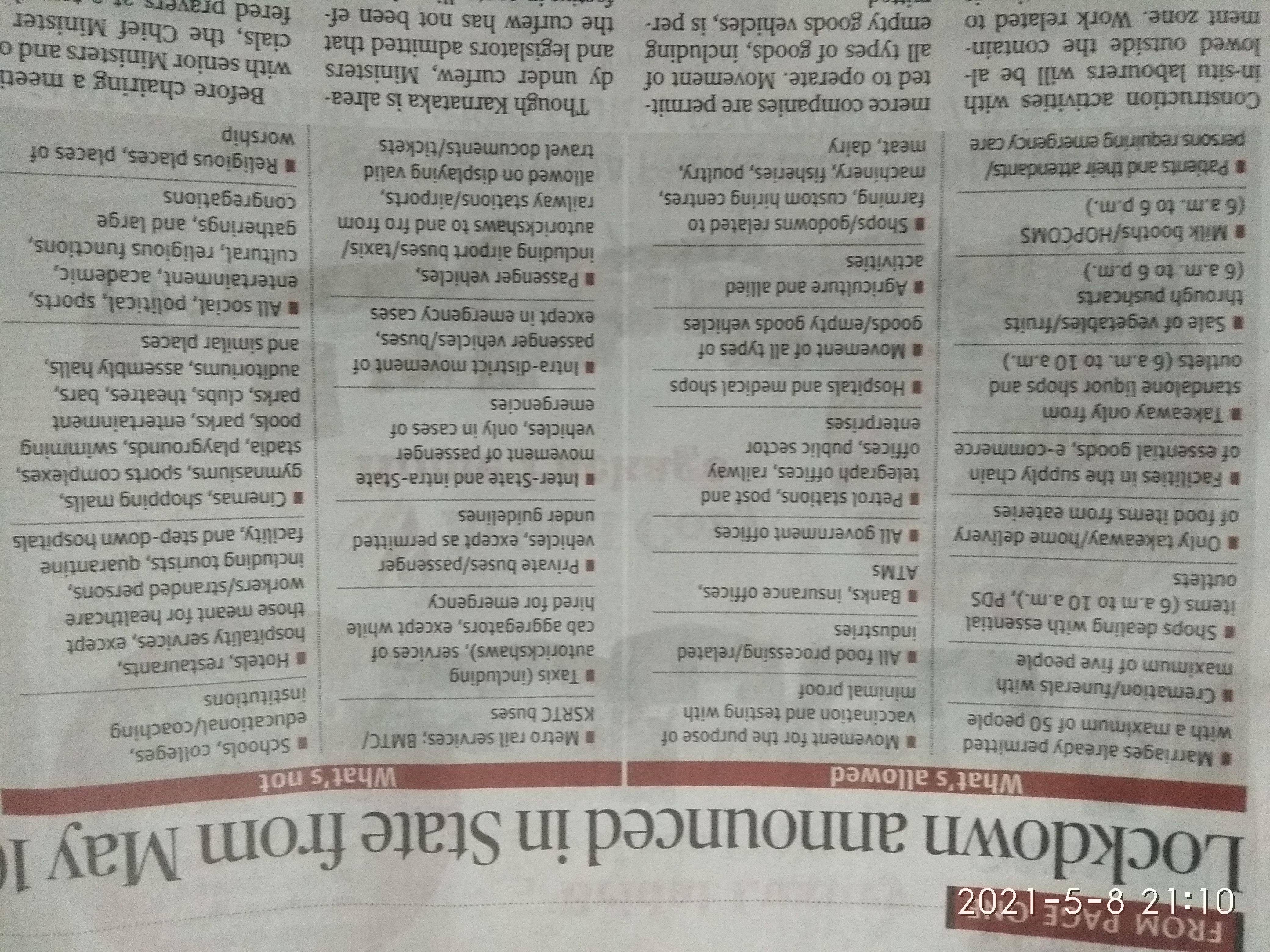 Premkumar Mallya
Mr A R Venkatachalam. You said right. Every body wishes so. But correcting a large corpus of illiterate people is next thing to impossible. Just imagine, in a nation with 140 Crore population, 30% is already below poverty line ( ie about 42 Crores)!!!!!!!!! I have myself noticed that in many instances Police have tried to advise the people. Even in cities like Bangalore and much smaller Hubli, all people are not capable enough to learn the importance of precautions required from the part of the Public at large, as floating population is by and large made of rural people, whose awareness is limited. All said & done, it is necessary that lockdown be withdrawn in stage by stage manner from 24th May onwards, as per suggestion given below: 1) All shops can be allowed to remain open from 6 am to 8PM, which will prevent overcrowding at retail shop premises in the mornings. This will also help to avoid late night outings beyond 8.30 PM or 9 PM. Merely reducing working hours is strictly speaking not a sensible solution. However, large gatherings in mauls, clubs & weekly markets should be still avoided. 2) Simultaneously, at various check-posts, Police personnel & NGO's can be advised to check &verify whether all commuters are wearing masks. People moving around without masks can be fined. 3) Local city- Bus & all train services can be permitted at half seating capacity, and mask verifying can be checked within trains & buses also. 4)Parallel to (1), (2) &(3) above, vaccination has to be expedited. News reports say that large quantities of vaccines are being imported. Also, under Section 144 of Cr P C, groups - forming in Public places can be stopped in tot, until, we complete the vaccination as early as possible. To expedite vaccination, number of points / counters have to be substantially increased, at least for one month, where after, the booths / counters can be reduced little by little. This way, the vaccination can be expedited, and all people in their productive working life should be given priority for vaccination, which will encourage them to take up their works in full swing, which will also tend to maintain GDP. The matter is serious because, working population within 70% of the population above poverty line could be less than 60 Crores. Their welfare needs priority too!!!!!!! This way, over a period of 2 months from now, ie., by the middle of July, we should be free of danger. more
May 10

Govind Bindiganavale (Residents Of Bangalore)
Except for a few minor tweaks in the wording, nothing much has changed. Governments did not learn the lessons from the first phase of the virus that occurred last year. It is just reacting to the situation as it pans out. more
May 10

ANANDAMAYA DASA
Prolonged exersion in low level of oxygen in the blood causes (hypoxia)-serious hupocapnia, lower CO2 in the bloodstream leading to HACE -cerebral edema and death by brain herniation. Prolonged use of Covid face mask and deprivation of O2 to the body cud trigger this condition?? more
May 10

A R VENKATACHALAM
Police has a responsibility to play a larger role now . They have to counsel people on wearing masks ( rationale of wearing masks ) , wear it properly , maintain safe distancing . Proper conduct and behaviour . more
May 10

Shekar Natesh
Dr.Shekar has put it very properly that the only difference is enhanced stupidity more
May 10
View 8 more comment(s)
Post a Comment