Judiciary to intervene AT PUBLIC AND NATIONAL INTEREST

* Important Sections and Chapters of IPC UNENFORCED DECADES TOGETHER
* No Punishments on Contempt of Courts
* No Punishments relating to Offences and Acts against Lawful Authority of Govt Officials
* No time limit on Investigation, FIR, Case Proceedings and Judgements .

* I) Agitating Protesters of Citizenship have denied, defied SC Directive Orders.
ii) Agitating Protesters of Farm Bills have also Denied and Defied SC Directive Orders.
In both issues Public Convenience, Livelihood as well as Government are challenged by Aggressive Protesters AND STILL H'ble Apex Court is silent .
* Riots, Terror Activities were carried in both these ISSUES .
*. Now the Arrogant Attitude and Deny of Mask and Distancing by those Defying GOVERNMENT ORDERS IS CAUSING HEAVY LOSS TO GOVTS , AND MISERABLE AGONIES TO GENERAL PUBLIC resulting in Loss of Health Money and even Souls besides SERIOUSLY HITTING LIVELIHOOD.

Csn Sarma
Important to NOTE: ,, There are more than 30% Convicts in Legislatures as per 2013 Statistics ,, There are more than TWO Thousands Contempt of Court Cases in many States ,, Though Black Money was caught in Election Time at about 1.15 Crores per MLA Seat no Cases No Punishments though identified in every Election ,, There are no Cases and Punishments though Politicians insulted IAS , IPS Officers since beyond 2 Decades ,, There are no Cases and Punishments though Authorities , Police Force insulted by Adament Arrogant Individuals since last 2 Decades ,, A Congress MLA said that CM's Helicopter will be Blasted in Air ,, A YSR Congress MLA called for Murdering CM on Main Road ,, There are no Punishments though Religious insults and Aggressions by Individuals since last 1 and 1/2 Decades ,, There are no Punishments though Religious Holy Places, Dieties damaged by Individual Miscreants though Cases filed ,, There is no Equal application of Law on the 3 Religions and no Punishments against Cases lodged ,, There is no Equal application of Law on Religious institutions decades together and no Justice ,, There is no Equal opportunity for Livelihood Earnings while Certain Castes are patronised and befitted EVEN TO MILLIONAIRES . ,, Court Cases Increasing and stand at beyond one Lakh in each State WHILE MOST IMPORTANT CHAPTERS OF IPC AND Articles of INDIAN CONSTITUTION ARE UNENFORCED , UNIMPLEMENTED . ,, Bad and Doubtful Debts amount to more than 12 Crores while Corporates share scores about 8 lakh Crores ,, Decades together Gold, Red Sandal , Metals , Opium/Ganjai , and even Currency are under Smuggling looting National and Public Wealth *** This pathetic situation in India questions whether there is Government and whether there is Responsible Judiciary . Please share Your opinion. more
Jun 10 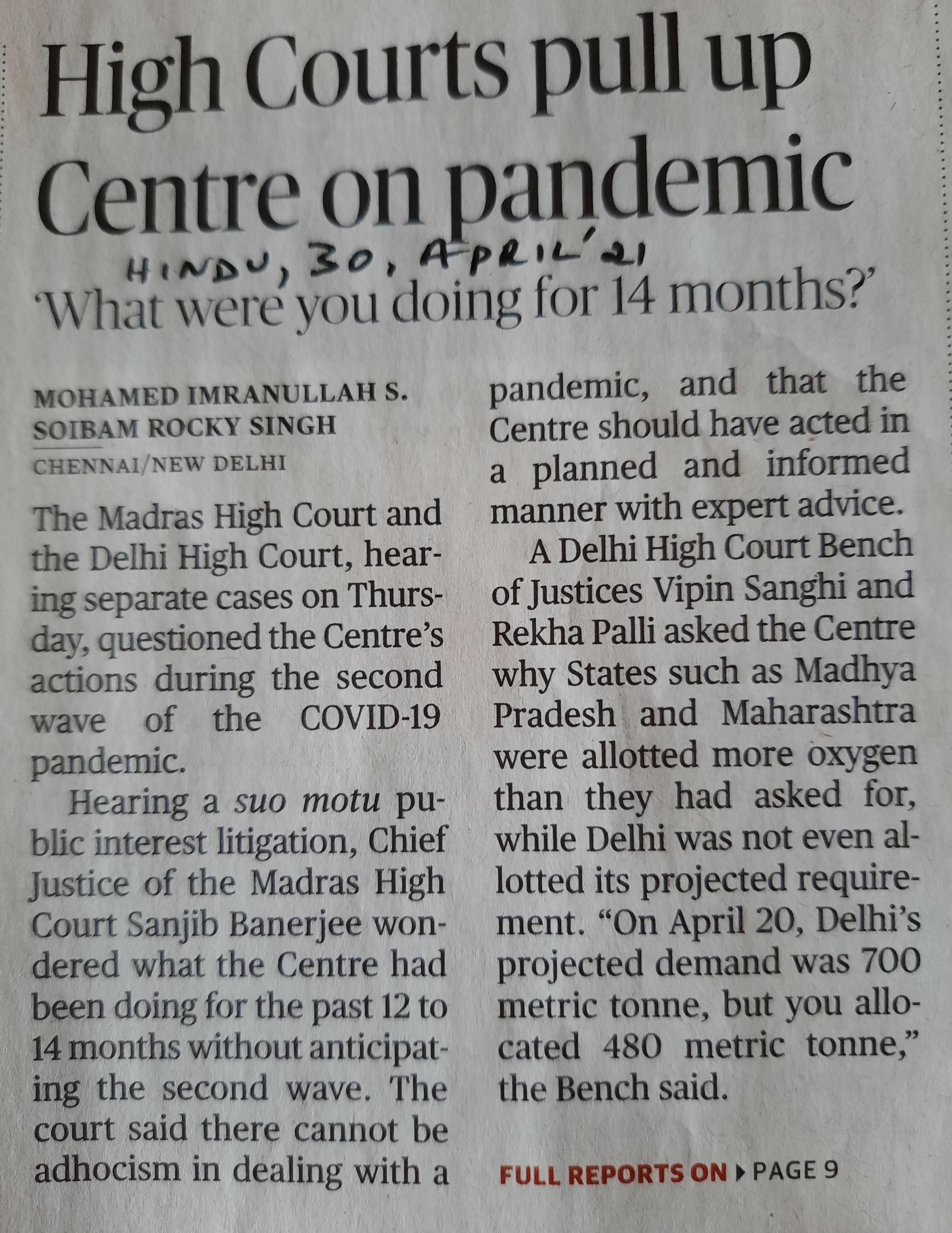 Yes as the administration had diverted its concentration towards the Elections and relaxed observance of the Covid19 norms that resulted in the spike in cases Judiciary had to intervene. more
Apr 30

Csn Sarma
GOI earlier Orders to States also were Strict on Mask Distancing Handwash Implementation. What else Center to do on Punishing and Enforcement. .
Wine Shops Bars Clubs Restaurants carried on . Political Rallies etc carried on . IS ONLY ELECTIONS TO BE POSTPONED IS THE ISSUE OF THOUGHT more
Apr 30
Post a Comment