Everyone please vote on this important issue. I believe all premium devices should be available in India but they should be selling at genuine prices and not in black. Urge all Members to vote here and Legal Metrology people must ensure hospitals arent overcharging and MRPs are published always. Do vote everyone.... more 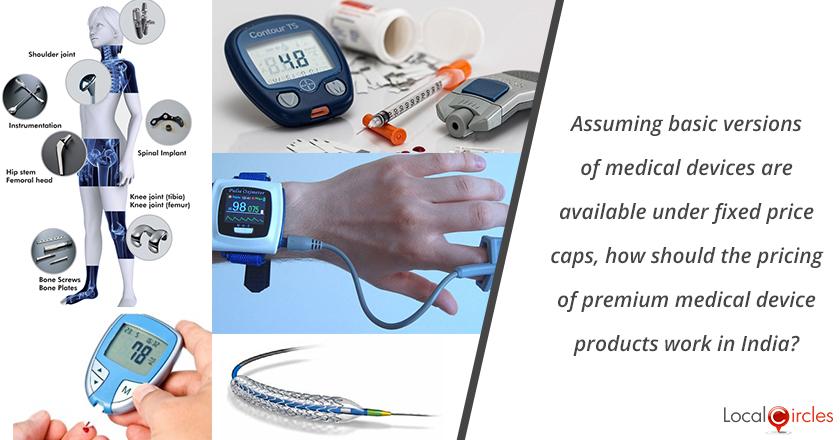 Assuming basic versions of medical devices are available under fixed price caps, how should the pricing of premium medical device products work in India?
Participate in Poll.
Helpful Weights, Measures and MRP Enforcement Feb 15
Viewed by 1184
View all 9 comments Below 9 comments

Ranjit Biswas
In most of the cases MRPs are heavily inflated and than discounts are offered to the consumers to lure and make them fool and therefore there is no use of demanding for such things, that too, when the government itself is not honest enough to ensure strict adherence of respective laws by the manufacturers & traders. more
Feb 20

Raja Aggarwal (Lawyer)
The govt has shifted it's policy. all medical devices are going to be identified as DRUGS from April 1 i suppose. Apart from expanding the scope of regulation to ensure safet ..

Kaushikk D. Vyas
Govt.has tried many times n directed pharma companies ,doctors to reduce prices, n only manufacture ,prescribe Generic medicines , but the strong hold of pharma companies n doctors never ever agreed n follow it.
Even the doctors were asked to prescribe medicines by it's Generic names that to written in clear bold letters not in unreadable hand writings, that is also not followed. The MNC n local pharma companies have ruled the world.
Sir, that's why govt started opening medicine shops namely, Pradhanmantri Jan aushadh Kendra's thought the medicines are very cheap but there is some element of doubt ,whether such medicines have right content in weight or units

This shows that pharma companies ,doctors both are not obliged to follow govt.directives.

Day by day the medical treatments n services are becoming more n more costlier , the Mediclaim insurance policy business has made it even still costlier. Who can afford it?

Simply copying Western countries in indian socio - economic conditions is not a wise decision.
Ministers, the sr.babus can get treated abroad at public money but what about service class people. Let there be many yojanaa like Ayushman or Maa, but it is all like patch work.

Had govt extended the our own medical schemes ESIS, covering all the citizens just by contributing by individual rupees 10- 20 per month, we would not have to dependent on FOREIGN MEDICAL INSURANCE COMPANIES , who are simply drains money from individual ,increasing premium, cap on age bar, limiting benefits n all other one sided conditions.

Neither the citizens or consumer forums or Govt taking care of it. Just simply formed a Authority like IRDA, which is Tiger without teeth n nails.