Is It Cardiac Arrest or Heart Attack?

Is It Cardiac Arrest or Heart Attack?

It's important to know the difference between a heart attack and cardiac arrest. Learn how the causes, symptoms, and immediate treatments differ.
A heart attack and a cardiac arrest, though both significant and dangerous, are two different cardiac events. Heart attacks happen when too little blood flow gets to the heart. In cardiac arrest, however, the heart malfunctions and stops beating, at which point a person may suddenly lose consciousness.
What Happens During a Heart Attack?
The medical term for a heart attack is myocardial infarction, or MI. Someone in the United States has a heart attack about every 34 seconds. These attacks occur because the blood supply to part of the heart muscle gets cut off — often a consequence of atherosclerosis, the formation of a fat-based plaque inside one or more of the arteries that carry oxygen-rich blood to the heart.
Heart attack symptoms may start suddenly or gradually. They include:
• Chest pain. This may feel like pressure, pain, or tightness in the center of your chest. It may come and go but usually lasts for several minutes.
• Radiating pain. Pain may be felt in your arms, back, or jaw. This type of pain is more common in women.
• Difficulty breathing. You may be short of breath with or without pain.
• Other symptoms. You may have stomach pain, nausea, dizziness, or cold sweats. These symptoms are also more common in women.
What Happens During Cardiac Arrest?
About 295,000 incidences of cardiac arrest happen outside of a hospital every year in the United States. While a heart attack is a problem related to circulation, a cardiac arrest is an electrical problem that causes an irregular heartbeat, or an arrhythmia. An arrhythmia can keep your heart from pumping enough blood or it can stop it from beating completely.
A heart attack increases the risk for cardiac arrest, but most heart attacks do not cause cardiac arrest. Other heart conditions that can lead to cardiac arrest include diseases of the heart muscle, heart failure, and a type of arrhythmia called ventricular fibrillation.
During cardiac arrest, also called sudden cardiac event, a person will pass out as his or her heart loses its ability to get blood to the brain. Usually they won’t be breathing and will have no pulse.
What to Do for a Heart Attack and for Cardiac Arrest
Heart attack and cardiac arrest are different heart problems, but they are both emergencies in which every second counts. If you think you or someone near you is having a heart attack or is in cardiac arrest, call Emergency.
Emergency medical services have the best chance of saving a person's life after heart attack or cardiac arrest because they can start treatment as soon as they reach the scene. Getting to the hospital by ambulance is better than arriving by car — because treatment can begin en route. This is especially important for someone in cardiac arrest, as they can die within minutes after the heart stops if CPR (cardiopulmonary resuscitation) is not started or an AED (automated external defibrillator) is not used to shock the heart.
For cardiac arrest. If someone has cardiac arrest and you know how to do hands-only CPR, you can double or even triple that person’s chance of survival. Here are the steps to take if someone has cardiac arrest:
• Yell for help.
• Call Emergency
• Check for breathing. If the person is not breathing, start CPR.
• Use an automated external defibrillator (AED) if one is available.
• Continue CPR until help arrives.
For a heart attack. Your chances of surviving a heart attack depend on how severe the attack is and how quickly you get treated. The best advice: Don't wait more than five minutes before calling for emergency help. With fast and proper heart attack treatment, most people recover. more
Helpful Cardiology and Heart Care Jan 30
Viewed by 188
View all 10 comments Below 10 comments

Saripalli Suryanarayana
This is a real info where in hospitalized complications can be initially avoided.I hope it serves many more
Feb 03

Durga Prasad
Thanks Raja Sahib for the very useful information. Just about a week ago, a relative of mine was hospitalised and was put on a pace maker as the doctors identified the problem to be extremely low number of heart beats...as low as 45. The total billing came to Re. 4.5 Lacs in a 5 star hospital. First they inserted a temporary pacemaker to check and then put him on a permanent one as the temporary one did not show result! He was billed for both !! A battery of doctors, specialists and super specialist, innumerable blood samples and ECGs and what not! This is just one aspect of the horrendous experience. What I wish to know and understand from you is, why does a condition like a sudden drop in the number of heart beats occur? What is this condition known as? Another condition known as Tachycardia or the galloping heart rate also occurs in another set of patients. And what is this condition due to? Thirdly, how to identify the problems on basis of symptoms and what emergency measures should be taken up to save a patient's life. During my chat with my relative, I was told that he is not a sugar patient. During a routine checkup, a doctor in the US suggested that he should take a BP tablet on daily basis. But his doctor in India made fun of the US doctor and discontinued the BP medicine. My relative has been having a black-out for a few seconds now and then for quite some time. He has no other problem. He is around 65 years of age. Most members in Local Circles would wish to know why these conditions arise and what should be the identifying factors and first aid actions? Also can these conditions be prevented? more
Feb 03

Vilas Kotbagi
Here it is- Life Saving Kit* 1. A talk was delivered by Major General Dr. Kayani, a renowned cardiologist, on *Prevention of Heart Diseases*, at NUST. The guest speaker introduced to the audience a very handy kit which may protect a person from dying of sudden heart attack. It has following items :- *a. Tab Disprin – 4* *b. Tab Angisid – 4* *c. Deponit NT5 skin patch-1* *2. The worthy professor elaborated that if one feels sudden tightness and pain in centre of chest, radiating to left arm or both sides of neck, accompanied by sweating and uneasiness, one is likely to be in a state of heart attack.* Following measures must be taken immediately :- *a. Keeping one Angisid tablet under the tongue.* *b. Chewing one Disprin tablet.* *c. Pealing of and sticking the Deponit NT5 skin patch on left side of chest.* *3. The items of this kit cost about Rs 50-55, without any specific expert handling but can definitely save a person from dying immediately of a heart attack.* *4. It is advised that every individual, above 40 years of age, must prepare a kit of his / her own and should always carry inside one’s pocket (hand-bag – in case of ladies).* *5. Please disseminate the contents of the message to all about whom you care.* more
Feb 01 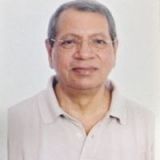 Gopal Talwar (No; ordinary citizen. )
Dr. Chandra thank you very much for a very learned and informative advice. Dear Sir you had once recommended a pouch containing a couple of tablets to be taken immediately when such symptoms are felt; could you kindly repeat them and let us know whether they are readily available. Many thanks Sir. more
Feb 01