Brij Gupta
Friends, this Friday a picture "Airlift" is getting released about Air India operation in Kuwait during 1990. From the promo, I have heard that they have projected a person with the name of Ranjeet Katyal and made him a hero by telling that he helped thousands of Indians to evacuate.
Just wanted to inform you that this information about Ranjeet Katyal is totally wrong . No one of us who were in Kuwait that time, had known this person and he was not a renowned business man in Kuwait at all. it seems that he was just a personal friend of IK Gujral , the. Foreign Minister who came to Kuwait and took away all business men with him in his plane.
All of us had to struggle very hard and find our own way to come out of Kuwait. Some came by road to Amman and then flew of their own. Air India started the flight from Amman to Mumbai via Dubai very late after about one month of invasion and then also they were giving ticket only upon giving them a cheque from your NRI account. However , later the Govt took decision not to encash those cheques. This is true , as I am witness to all this and know how much we all had suffered. We first had to go to Baghdad in a bus, arrange dollars to buy ticket for flight from Baghdad to Amman which were run by Iraq airways and then buy ticket from Amman to Mumbai by air india by giving NRE cheques. Air India had started air lifting people from Amman only after about a month of invasion.
In fact when Gujral came to Kuwait, he made a speech asking all Indians to help Saddam , due to which , the Kuwaitis there became very aggressive against Indians and put posters overnight " Indian dogs go back" . And Gujral had also made a statement that his plane will leave Kuwait at so and so time and will carry small children and pregnant women with him in the plane. But when loads of such people reached airport an hour before the fixed time, found that plane had already left with all his personal friends and businessmen who might have paid him lot of money in cash or in gold.
A ship was also arranged to leave from Kuwait port and that ship also left much before the fixed time with all belongings of most of business men. The common people like us had to struggle to make our arrangements to reach Amman by any means possible for you. more
Helpful Overseas Indians Jan 19
Viewed by 280

Dipak Chakrabarti
I have not used Air India for the 40 years. more
Jan 24 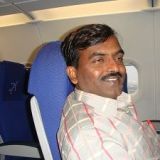