During an angioplasty, why is the catheter now being inserted through the wrist? and not Leg? 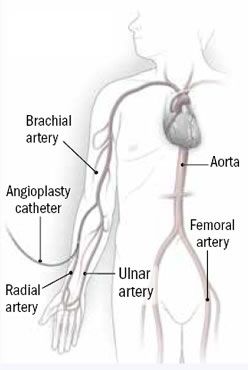 Raja Chandra (CALL BE ADVISOR WITH AGE AND EXPERIENCE)
Thank you all very much for appreciating my post. Best Regards to you all. more
Nov 28

Durga Prasad
Thanks Brij Gupta ji. Loosing some one's parent is tragic and is very sad, but loosing a young person and that too because of deadly cancer is much more painful. I can imagine the trauma the family would have faced from the day they came to know that he was suffering from brain cancer and their grief when the end came is unimaginable. Kindly accept my condolences and also convey my feelings to the bereaved family. I pray to Lord to give peace to his soul. more
Nov 27

Brij Gupta (Essel RWA - Technical Convener)
Durga Prasad ji, just saw all these messages since I had also been occupied due to death of my young nephew at Patiala due to brain cancer. Please accept my heartfelt condolences also on the demise of your father, who left for his heavenly abode after living his life fully. more
Nov 27

Durga Prasad
Thanks to all friends for their soothing condolence messages. more
Nov 26
View 21 more comment(s)
Post a Comment