I placed an order of a reputed company's fry pan on one of India's 'so called' most prestigious e-commerce website- Snapdeal.

Firstly the product's MRP mentioned on Snapdeal was Rs 1910. I got suspicious and tried checking the actual MRP of the product on the manufacturing Company's own website first but it was not opening so I decided to go ahead. Then, they were also offering a discount of 16% after which its price became Rs 1610, and on using HDFC card, there was further discount so I got it for Rs 1208.
When the product arrived, there was no MRP mentioned on the packing box of the manufacturing company. Also, the lid of the pan had a large scratch, probably a fabrication defect, and the rim was also crinkled at several places. So I initiated the return and refund process, which requests consumers to repack the item. When the courier guy came and we handed over the product to him, we noticed that he started re-packing the product very carefully (though we had done it already), which was a clear indication that another buyer was going to be fooled.
On top of that, when I checked the website of the manufacturer, I saw that the item's MRP was Rs 1260 and after discount it was Rs 1070.
The refund process, however, went smoothly.
So basically we are tricked into believing that we are saving our money as well as time, as the e-commerce websites nowadays claim, although it is ironical that none of this happened in this case, and it would have been better had I gone to a nearby retailer and bought the same product after inspection. more 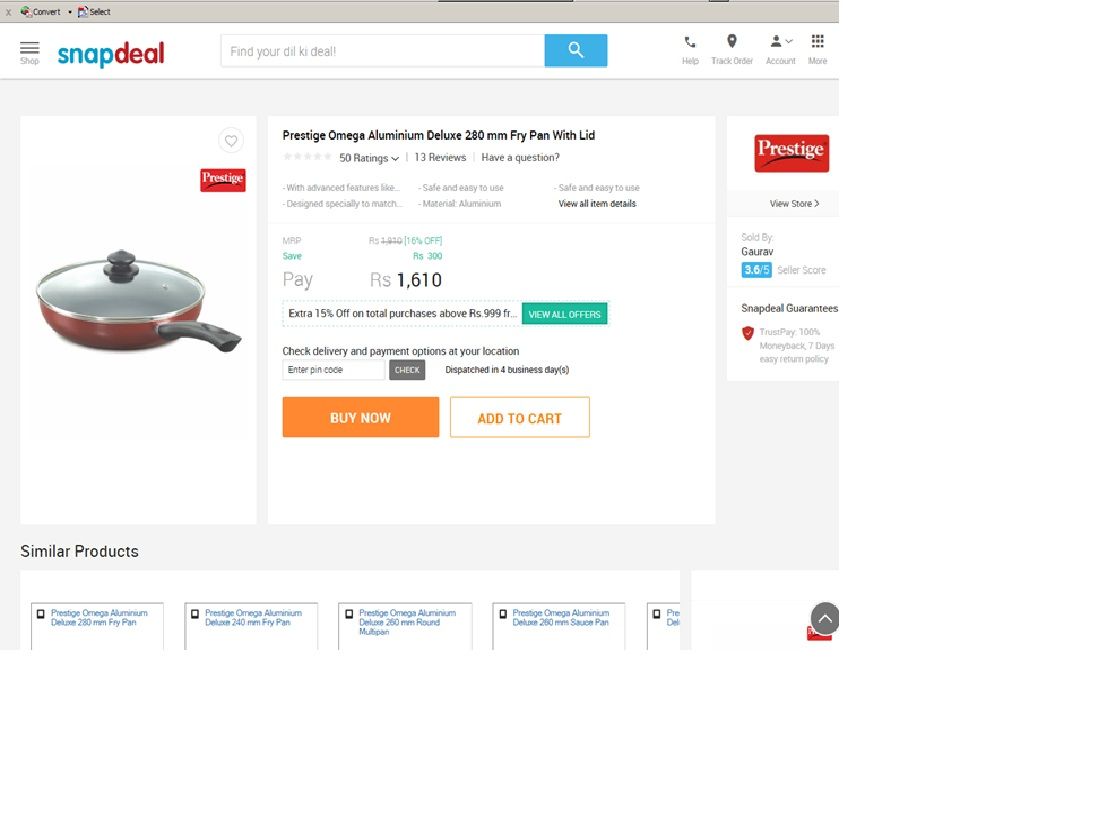 Rajiv Khurana
I've faced such issues with every well-known e-tailer but they're still getting a lot of business from us Indians. And I'm sure all of us have a story to tell in the same vein. Should it be this easy to fool us? more
Oct 24

Arvind Yadav
Can you please at: http://www.consumercourt.in/address/14220-consumer-court-uttar-pradesh.html more
Sep 07

Vijay Pal Sharma
Avoid snapdeal at all cost irrespective of the offer. I ordered skullcandy headphones which were at 50% discount so I went ahead and placed the order. But the item delivered was fake, which you can get at max. 150 Rs.. I end up paying 850 Rs that too after 50% discount. I didn't initiated the return but decided never to buy from these websites such as snapdeal, shopclues etc. which are basically a Daily Bazaar companies without any supply chain management. I always shops from Amazon and experience has been smooth with prices and quality. The same earphone when I ordered through Amazon were delivered with the option to check the authenticity of the product online, which I did. I am still using those headphones and they are working great. more
Sep 07

S K Virmani (Expert)
snapdeal has got very poor reputation. If we believe feedback on the public domain, one need to avoid the shopping through snapdeal. The company does not have proper grievance redressal system. However, the offers made by the company attracts the shoppers to be fallen into their prey their operations. more
Sep 07
View 7 more comment(s)
Post a Comment