Among many questions that we should debate over the next few weeks, the most important one is not why the government held the well-publicised interaction with the who's who of Sangh Parivar? Rather, the moot question is why the meeting was convened after more than fifteen months of government and not before?

The idea of Samanvay (loosely meaning coordination) first surfaced in the Sangh Parivar in the 1970s when Big Brother established forums called Samanvay Samitis with aim to bring together whole-timers of affiliates at district and state levels. Additionally, the top-brass of the RSS began secretly meeting senior leaders of main affiliates and this included Bharatiya Janata Party's preceding party, Jana Sangh. One-time Jana Sangh leaders like Atal Bihari Vajpayee and LK Advani continued participating despite merger into Janata Party and being part of India's first non-Congress government. This provided the basis of the 'dual-membership' issue, a major factor in the crash of the Morarji Desai government.

Vajpayee abandoned Samanvay Samitis after BJP was established because he wished a break from Jana Sangh's heritage. After the debacle in 1984, the interactions were revived at Advani's initiative who also resumed the practise of "deputing" Pracharaks to the political affiliate. Modi was among the first batch of leaders inducted laterally into BJP. Vajpayee again distanced the NDA government from RSS after re-election in October 1999. Affiliated organisations were angered because the government and ministers did not pay them the respect which they felt was due.

The practice was revived during in 2003 when the disenchantment within the Parivar was threatening to ground the government. In May 2003 a three-day meeting of almost five dozen top leaders of the fraternity gathered with then Sarsanghchalak, KS Sudarshan in the chair. The meeting was attended by Vajpayee, Advani and a host of their cabinet colleagues. Affiliates too were represented by the top brass: Ashok Singhal and Pravin Togadia held the Vishwa Hindu Parishad placard at the "guard of honour".

The most significant distinction between the meeting in 2003 and this latest one is that while previously senior ministers who did not have a RSS background were not invited¸ this time they were part of the deliberations. The expansion of the attendee list of the Samanvay Baithak demonstrates that the RSS leadership (this meeting was convened by them and not by government) felt that ministers needed to brief them on what they had done so far. The deliberative exercise would have also enabled ministers to gain better insight into RSS thinking and can be factored during policy formulation and programme implementation. Government policy being influenced by non-ministers and non-officers is not new - the UPA was routinely advised by National Advisory Council - but this is the first time that such interaction has happened with an extra-constitutional body.

The Samanvay is somewhat also an attempt of Modi to co-opt principal trouble makers within the Sangh Parivar by instilling a sense of self-importance in them. Barring a handful of the top leaders of the RSS, most functionaries like - and aspire for - the trappings of power. Ministerial positions are therefore what many of them see as being their rightful entitlement. Since this has not come their way, the least would be to have access to ministers. It must be a remembered that a common refrain among mid-level leaders of the Sangh during NDA years was that ministers "did nothing" for them. Modi did not co-opt RSS leaders in Gujarat and animosity with nominees of Nagpur was a constant phenomenon during his tenure. He does not wish this to come back to haunt him at this stage.

No one should lose sight of the Bharatiya Mazdoor Sangh's decision to withdraw from the September 2 strike just days after their leaders received the invite to the Samanvay Baithak. In the months after government formation, Modi was flush with the electoral victory and there was a tendency to underplay the relevance of the RSS. Since early 2015, Modi suffered a series of political and electoral setbacks. With the polls in Bihar being all-important and because resentment is simmering within the Sangh Parivar, the government and RSS top-brass realised that formal interaction will make ties less fractious.

Despite many who deluded themselves into believing that Modi had shed his Hindutva core, the majority of Indians knew he carried ideological baggage when he was elected last year. But the Sangh Parivar is no longer a monolith and power has influenced people differently. There are many like Modi whose pragmatism tempers ideological commitment and they earn the purists' ire. Similarly, there are many like Singhal and Togadia whose puritanical thinking frustrates practioners of realpolitik.

Modi would have attended this meeting because he requires the support of RSS once again. The RSS nudge on OROP would have been accepted because of the electoral clout of ex-servicemen. The RSS would have been given this nudge because since 1992 the Akhil Bharatiya Poorva Sanik Seva Parishad has been an important member of the Sangh Parivar. Beyond a point neither Modi nor RSS will push each other. This meeting has, above all, restored the santulan within the Parivar. Modi remains his own master but Big Brother is no longer willing to watch from the sidelines. more
Helpful Lets discuss Elections Sep 09
Viewed by 2217
View all 15 comments Below 15 comments

Jacqueline Garewal
The tiny hole in the dam of secularism, the whole meat/slaughter issue, is very worrying to those who hope to live in an India that does not put religion before democracy. more
Sep 13

Since I am getting many such un-expected and un-known massages I am little
worried who is giving you my email address. 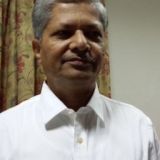 Subhash Vaid
Govt should give account of performance to reps of various reputed organisations incl RSS. Suggestions should also be obtained towards good governance on the same forum. more
Sep 10

Shyama Kant Jha
I want to draw attention towards the malfunctioning of AICTE, a premier organisation of GOVT. OF India. In fact rules and regulations for appointments and promotion of technical teachers all over India are framed by AICTE. But instead of framing its own it has just copied and pasted almost every thing from UGC report and tried to bring about some change so that it should appear to have been made by AICTE only. In this process AICTE has committed a lot of mistakes and the report is full of ambiguities. Due to lot of mistakes/anomalies/ Ambiguities many points are contradictory and dichotomous to each other. If only copy-paste was to be done, it could have been done in 2008 also when UGC report came, and no correction at all was required to be done. Due to the fact that AICTE took too much time to give its report only in Nov. 2012, we have had to suffer a lot. AICTE's report is very prone to be exploited either to facilitate or to harm the teachers. When I wanted to get clarification of these ambiguities through RTI they simply replied that it is not in their purview to give clarification. As AICTE frames the rule so it is the bounden duty of AICTE to give clarification otherwise whom to approach. One ridiculous thing they did that in reply to one of my RTI, AICTE has given me reply with reference to some other question. This speaks volume about the malpractices prevalent in AICTE. Please help me how to great clarification from AICTE regarding mistakes/anomalies/ Ambiguities otherwise promotion of many technical teachers of India will be held up. more
Sep 10
View 15 more comment(s)
Post a Comment