Outside of commute and travel what are the other places where you have experienced or observed VIP culture in the last 3 years?

HOW IS IT POSSIBLE ? THE RELIGIOUS HEAD HIMSELF / HERSELF SHOULD DENOUNCE THAT STATUS SO THAT THE DEVOTEES OF GOD ARE NOT PUT INTO PAIN, MISERY DURING, BEFORE OR AFTER THE EVENT (for the sake of true servants of God – the leaders are servants of God according to Swamy Chinmay Ananda ). Then all will fall in line and VIP Culture can be curbed and general public can move on the roads without being held up for no fault of theirs.

RELIGIOUS HEADS SHOULD REALIZE THAT THEY SHOULDN’T WASTE PUBLIC TIME JUST FOR ONE OR FOR A GROUP OF RELIGIOUS LEADERS. AFTER ALL THE ALMIGHTY IS FOR ONLY THE DEVOTEES, NOT JUST FOR THE LEADERS WHO ARE ACTULLY SERVANTS OF GOD. more 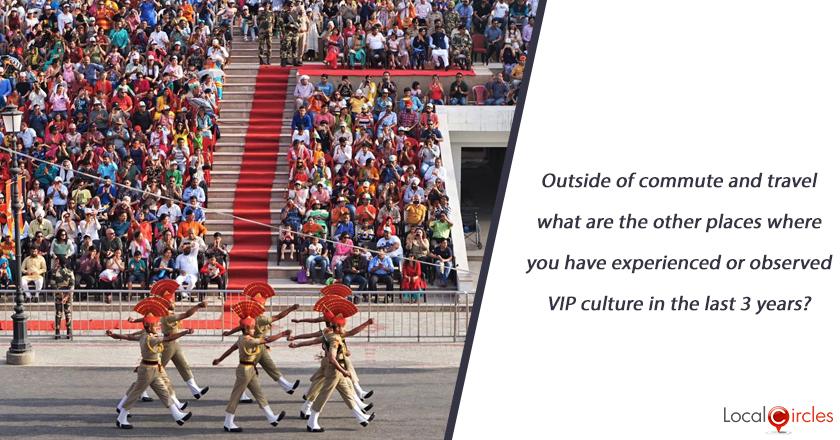 Outside of commute and travel what are the other places where you have experienced or observed VIP culture in the last 3 years?
Participate in Poll.
Helpful Transforming India Feb 22
Viewed by 2210
View all 15 comments Below 15 comments

Gopabandhu Mohapatra
VIP culture is every where and it should be stopped. more
Feb 24

Deenaz Bulsara
Sai Babaji said that it is better to be poor than rich and better to be rich than "Lordship", hence there should be no difference between the people and VIPs. Everyone, I repeat everyone will be judged by their deeds of action by the Almighty and those who were poor and good will actually be standing in front of the line to the gates of heaven than the very rich and corrupt. more
Feb 24

Ramesh Kutumbe
Why should we grudge VIP culture when we have created it. As long as there are VIPs there has to be and will be VIP culture.We, including myself, grudge it because we are not in that clan. We have history of VIPs and VIP culture. Did we not have Ch. Shivaji, Bajirao Peshve, Ranjit Singh, Rana Sang - to name a few who were not intruders and attackers of the land (who brought people to sbmision by threat to life of people.) There is a saying in Bengali (and also perhaps in many other languages) meaning "any one who accesses Lanka becomes Ravan". There is also a saying in English that " Power corrupts and absolute Power corrupts absolutely". Total equality is even beyond utopia. Even Almighty God has not created things equal in all respects - popular example is that all fingers of a hand are not equal - in fact each one is different in size and strength (of course for a purpose). Two men/women are seldom alike in looks alone - if we consider other traits like strength, memory, learning ability and other skills those are not equal. Even in Tribal life, leader had many previllages over the members of Tribe. Thus, in my opinion, it is not possible even to aim at abolition of VIPs and VIP culture, but what can possibly attempted is reduction in gap between VIPs and members of society.
How can we possibly reduce this gap? Some of the possible solutions are
as under:
1. Person contesting election MUST be living in that area.The purpose is all voters must know the character of candidate inside out. That means Gulam Nabi Azad should not contest election from Akola or Narendra Modi would not be a candidate from Benaras. Presently Political VIPs are elected more on Party basis than on personal capability and character.
2. There should be a mechanism in the hands of members of society to recall elected member if people feel that the elected candidate is not working for good of people. This can be organized by using technology i.e. by doing on line voting and freedom to change the choice periodically, perhaps every six months.
RYK. more
Feb 23

Bp Harichandra
We were all (employees of an organization) waiting in a que for a service. One of the Heads of a Department came and stood behind. One after the other, they said "Sir, come sir" and was not allowed to stand in que but made him avail the service first. This is not about staff and follower. This is respect we give for seniors or some higher ups. In a family function queue, if a father/mother comes and stands behind, we do the same thing. The other way round is also possible. Father/mother makes way for children. I do not feel there is anything wrong in it.

Why at all a bank manager be given more salary than a sweeper? If we think of this, we can understand at least one aspect VIP culture better. However it should not be "DEMAND" or "SUPREMACY" or "DADAGIRI". more
Feb 23
View 15 more comment(s)
Post a Comment