Not sure if everyone realizes, a corrupt PS/PA can be the gateway to corruption from a public perspective. Ensuring right candidates are being hired is a superb move.

When a senior BJP leader from Maharashtra sought to know from a party colleague why he was in such a hurry to return to Delhi after his felicitation in his constituency for having made it to the council of ministers in the Modi government, the minister replied, "I have to prepare the 100-day agenda."

The leader pointed out that the agenda could well be prepared by the officials in the minister's department. "You don't know Modi," the minister shot back. "He calls me on the office landline to ensure that I am working in the office."

Another minister, belonging to an alliance partner of the BJP, got a stern message when he made it known that he was not happy with his portfolio, "Get working, or there are others in line."

"If a minister has to appoint a PA (personal assistant), he has to first submit the list of shortlisted candidates to the PMO and will be allowed to appoint the PA only after a nod from the PMO," said a minister.

Team Modi is expected to follow more guidelines. "The prime minister has given us some strict guidelines. People of the country have given us a mandate, so they expect results from us. The PM is acutely conscious of the fact.

He has set certain goals. I cannot reveal what those goals are, but we have been told to adhere to them," said another minister.

The situation is even tougher for babu, who had been used to relatively lax regimes at the Centre in the past. As a result, Gujarat bureaucrats are suddenly in demand, with their counterparts in Delhi frantically calling them up. "They want to know how we handled and coped with Modi," said a babu from Gujarat. more
Helpful Lets discuss Elections Jun 16
Viewed by 1126
View all 19 comments Below 19 comments 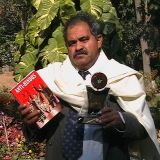 Rajesh Joshi
If people decide corruption will vanish instantly from all walks of life.Its due to some, holding key positions loot their fellow brothers,and they are not ashamed of while doing so.People should take initiative and stop bribing these wolfs.Earth will not end if your small job is not done because you have not paid bribe.Let all of us decide against paying any bribe and punish the corrupt through social boycott. more
Jun 17

Ashok Varma (Industrial Engineer )
Mitro! Can anyone record the reason why NETAs go around with folded hands ( barring criminals in the lock up ) and push those folded hands into the chests of voters ( subtly warning them to choose only them ) as only they can serve the poor voters of India? In fact no one shud b allowed to canvass--- let there be no money squandered to entice voters. Grateful thanks to Sheshan who achieved a lot in this direction --- otherwise one cud not sleep with blaring loud speakers and have walls and houses covered with detestable material , slogans and flags during elections! In this vein let very restricted bio data and claim be published and maybe debates aired about their claims---- what is the sense in going door to door in the inclement weather to convince the people that YOU are THE ONE to deliver ----- others will loot the treasury---- so make YOU the GUARD , so that your WRIT runs through the country! WAH! Subhan Allah! Thanks for reading, have a great day! Ashok Varma more
Jun 17
View 19 more comment(s)
Post a Comment