Attached notification friends. I support this personally. more
Helpful Residents of Maharashtra Jun 29
Viewed by 1298
View all 13 comments Below 13 comments

Dipak P.
The Peoples who don;t have any work & care for future are shining on social media by writing foolish messages / articles. more
Jul 27

H.P. Gurg
Giving Free Bees by PM programmes till November 2020 and Mamta Didi till 2021 are election Gimmicks for Bihar and West Bengal's Elections falling during that period, more
Jul 01

Devendra Shah
But in that case why other state people suffers for price hike and other matters. If election is not there in a particular state than what Govt would have not given free bees ? more
Jul 04

Anonymous Circle Member
Seemaji, as rightly said by Mr Nandaji that you seem to belong to reach family, so you don't know a value of Rupee earned by yourself.
Modiji announced help to poor upto November 2020, means lockdown will continue till than in other words.
If poor fellow gets FREE food sitting at home, without doing any work, other hand their emploeyers wiill have to send them salary at their home without doing any work, what do you think of Economy and status of Employer ?
On a later date these poor people will not like to work at all.
Any Government gives food, satisfies their stomach, they will in fact start producing more child to get more help from Government. (As it will be allotted on individual count basis written on ration card.)
Instead make everyone prepared to improve their own overall IMMUNITY POWER, and be ready to fight against any virus.
Seemaji, can you answer to me that why this Corona virus is not affecting pet dogs and cats, same with street animals including cow, buffalo, horse, monkey, rat, and so on. They are also living animals like Human Beings in other form.

Government is announcing different schemes and packages for "Garib". Have anyone checked whether they are getting a single rupee. My maid with 5 of their family members had opened such "Jan Dhan Bank Account", but till today no single rupee or intimation is received by them.

Seemaji, if you bring 10/100 cases who has received such amount regularly in their bank account, i will personally also contribute for such people. But I don't like people to sit home ideal.
Saying/announcing is different from actuals, please note.

Assume that Government might have paid or given FREE Ration or Food to 80 crore poor Indians, than from where this money will come. Major busineses are shut, except Pharma, Chemists, Doctors, Hospitals, Nursing Homes, and MAINLY LABORATORIES. There is no turnover in wholesale market, so no GST, no Income Tax from them.

Like poor, there is a major middle class families, who can just earn for their daily needs, but can't bagg to others in today's scenario. Have Government done anything for them. For poor there are plenty of NGO doing charity for all things to them.

I hope you understand little Economy.
I will be glad in receiving reply on this by you Seemaji and all.
I was a big Fan and Follower of Modiji, but now doubting/checking on me at various time.
Please anyone come forward to clear my doubts. more
Jun 30 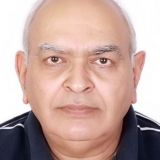 Chanderkiran Nanda
Seema looks you are from a rich family who can live with permanent lockdown. Think of people who earn had to mouth and cannot go to work. Instead of corona they will die otherwise. Even if they get corona they will not go to hospital as they cannot afford but they will spread to others. Who is the sufferer people like you. For them death is every day for your death is a fear Seema. Lockdown must be removed totally immediately and let life start please. Gardens are open.I go for walk in the morning to one of the garden. I feel I am walking in a grave yard. I do not see more than 2-3 people. You have created fear of death so deep into the common person that he/she dares not step out. But they will die inside their own house. more
Jun 30

Deenaz Bulsara
Yesterday, I saw a programme on India Today where they questioned the lock down and asked if it will continue like this for another year. Opening up and then closing down again several times. There were many arguments and no conclusions. We have to live with this virus. If we can distance ourselves and keep strict discipline may be things will change but there is no such thing with the people of India. So we will suffer and lose. more
Jun 30
View 13 more comment(s)
Post a Comment