After his eventful Gujarat tour, Aam Aadmi Party chief Arvind Kejriwal will embark on three-day tour of Maharashtra on Wednesday ahead of the upcoming General Elections.

True to his style, Kejriwal will board a Mumbai local train today to kick-off his tour of the key western state.

As per the itinerary available in public domain, Kejriwal will take an auto-rickshaw from airport (after landing in the city) to travel to Andheri station – a 5 km-long journey.

The road show from the domestic terminal to the Andheri station will travel through AAP leader Mayank Gandhi's constituency, who will contest the Lok Sabha polls against sitting Congress MP Gurudas Kamath.

The AAP chief will then board the hugely-popular and city's lifeline Mumbai local, to travel to Churchgate station in South Mumbai.

There, Kejriwal will take part in a private fund-raising meeting, after which he will start another road show traversing the Mumbai South and Mumbai North East constituencies. AAP candidates Meera Sanyal, a former banker, and activist Medha Patkar will respectively contest from the two constituencies.

AAP, which is contesting its first Lok Sabha elections, is looking at Mumbai as its second major target after Delhi, where it formed a government for little less than two months with outside support from the Congress.

AAP hopes to raise huge funds from the country's financial capital, and a much-needed support from the urban centers around Mumbai ahead of the national elections. more 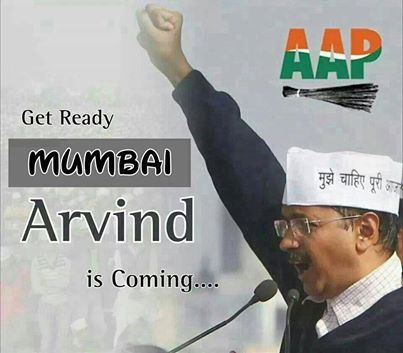 Rajeev Lala
@ Wilfred Lobo, I agree with your viewpoint. But...it were the people, the common man who wanted to be out there to show their support. Wish i too could've been a part of that mob to show my solidarity with AAP and fight against the corrupt politicians who are now present in all political parties, whether the Congress or BJP....All the best to AAP. We the people need to bring about this change... I speak to all... whether autorickshaw drivers, vendors...they are all wanting a non corrput govt. AAP is the only alternative...I canvas for them..... more
Mar 13

K V R K VISWESWARA RAO
My First say to Kumar viswas,ashoak agarwal.shazia is "Are you entered the party for tickets of MP/MLA or to work for the country." If so they should not be given importance from where they are contesting ,or not contesting. Bluntly they should follow the instructions of the party. If not so what is the difference in AAP & other political parties. My sincere request for these guys is don't comment Or twitter any message the Supporters of APP are feeling very bad & self immolated.
As per our stand "we should forget whom is contesting from where.We should focus on the agenda of the party & take it to the common Man.
These type of loose comments are back stabbing the volunteers and giving a chance to media & other parties to make comments on us. Already their is a lot of anti propaganda against APP in the media you are giving fuel to it by such comments.
My sincere request to all top brass forget all ego clashes & seat problems .Think in a broad way that we are here for the nation not for individuals.Our aim is Corruption free INDIA and the present political system to be changed by means of SWARAJ. Don't for get that.Other wise because of few people, large section of Volunteers,sympathizers are suffering and are facing tough situations when going into public. Pl.help us by not issuing any loose comments & tweets.
As some one said it is not possible for AK or anybody to give same ticket to not more than one person per Constituency.And also not to give to new comers.How will party go into public without inviting new breed.Tickets are to be distributed only who have some face value & create some fight with the opponent.That means those who are not getting ticket are not having face values. Sacrifice is the big thing.One has to obtain this in the interest of this country.
My request to all of the APP members who are wishing to contest the election whether you get it or not join the hands together for the fight against this system.Don't let down the faith of a common man who for the first time got a platform to fight against this system. more
Mar 13

Wilfred Lobo (Simple human)
Today's chaos was really sad for the image of AAP in mumbai, I AAP supporters and members should be given instructions for a cool and decent behaviour well advance, this will help in developing rthe image or else what is the difference between destructive and unruly supporterts of other political parties and AAP. more
Mar 12

Rajeev Lala
Who is the AAP candidate for Mumbai North West? Is Dutt contesting from there on Congress seat? more
Mar 12
View 6 more comment(s)
Post a Comment