Arvind Kejriwal on Tuesday declared he will take on Narendra Modi in Varanasi in the national election, hoping for a repeat of his success against three-time Delhi chief minister Sheila Dikshit in the December state polls. The chief of the Aam Aadmi Party (AAP) that’s making its national debut made the announcement at what was meant to be a referendum rally in the religious city on him contesting directly against Modi.

“I am ready to accept this challenge,” he said.
Kejriwal pitched the election as a “political movement” to defeat the Bharatiya Janata Party’s (BJP’s) prime ministerial candidate Modi from Varanasi and Congress party scion Rahul Gandhi from Amethi, both in Uttar Pradesh, which sends the maximum of 80 lawmakers to the Lok Sabha.
“Everyone should take one month off (for volunteer election work). One half of the people should come to Amethi and the other half to Varanasi. Let us convert this election into a historic political movement,” he said. The Congress is yet to declare its candidate for the Varanasi constituency.
In the Delhi election, AAP’s first, Kejriwal defeated Congress’s Dikshit from the New Delhi assembly constituency by about 25,000 votes.
Kejriwal’s decision to contest the Lok Sabha election directly against Modi in Varanasi, seen as an easy win for the BJP, is seen by experts as an attempt to energize his party’s cadre in an election that is strongly personality-driven. Modi is also contesting from Vadodara in Gujarat.

“I am not here to become a member of Parliament. If that was my intent, I would have chosen a safe seat like most other politicians are doing,” Kejriwal told a well-attended crowd in Varanasi’s Beniya Bagh grounds. “I don’t have the desire for power. If that was so I would not have quit the post of chief minister in Delhi.” Kejriwal resigned as Delhi’s chief minister after failing to get the anti-graft Lokpal Bill passed in the assembly.

AAP has held referendums on several issues in the past as well, including on the decision to go political and form the party, on Kejriwal’s decision to contest against Dikshit and even on forming a minority government in Delhi.

At the Varanasi rally, his second in Uttar Pradesh after the Kanpur rally last month, Kejriwal sought to address his focus groups—farmers, small traders, workers and women. The AAP leader, however, was attacked with eggs and ink during the roadshow preceding the rally. His face and shirt were splattered with ink by unidentified people.

“Today, I want to talk to the farmers of Varanasi. If you want to vote for Modi, he will take away all your land.... Do not vote for Modi, you will not be able to save your land and you will be forced to commit suicide,” he said, adding that Modi’s government in Gujarat had cancelled all subsidies for farmers.
Debunking Gujarat government’s claims of development in the state, Kejriwal said people there had been voting for Modi because there “exists no opposition” to him. Modi has been Gujarat chief minister since 2001.

The BJP has been winning in Varanasi since 1991, excluding the five years since 2004 when the Congress won the seat. In the 2009 national elections, BJP’s Murli Manohar Joshi won in Varanasi with a 30.52% vote share. Joshi will contest from Kanpur in this election.

Attacking both Gandhi and Modi, Kejriwal on Tuesday said: “These are both armies—one named UPA (United Progressive Alliance led by the Congress) and another named NDA (National Democratic Alliance led by the BJP). While Rahul Gandhi is the shahenshah (king) of the UPA, Modi is the same for NDA. If you defeat both Rahul and Modi, then these armies will automatically be crushed.”

Kejriwal also sought to take credit for the Election Commission’s directive on Monday asking the government to defer till the conclusion of the election the controversial doubling of natural gas prices. AAP on Tuesday announced its 11th list of candidates for elections—taking its total number of candidates to 350. more 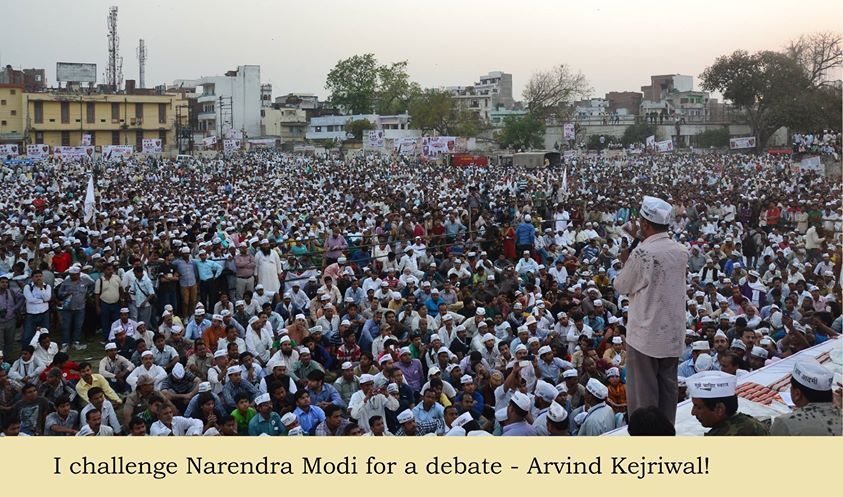 Sharad Khare
I am not clear.what's or reply more
Mar 28

Sharad Khare
Dear Seemaji
Pl. do let. me know if you need my help
Where is your office?
I can Improve your working by TPM methodology
Place let me know your cell no. too
S v khare
Vile parle
9321599272