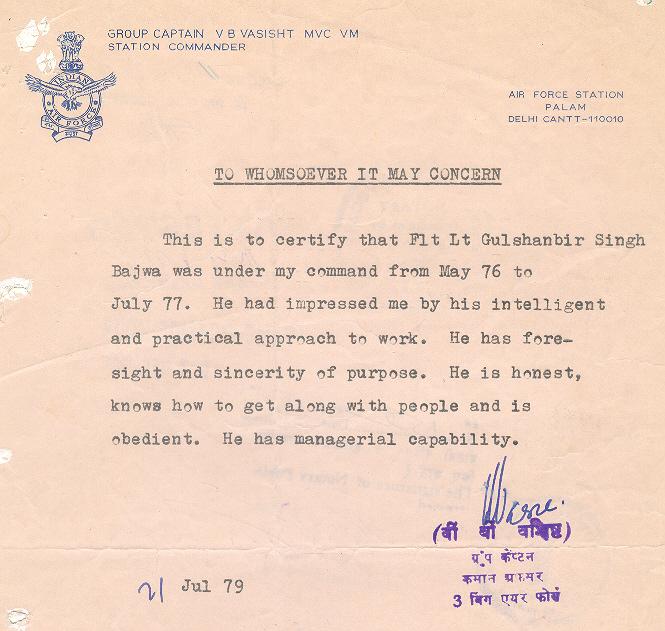 To
Chief Justice of India
supremecourt@nic.in

I am a Direct Permanent Commissioned Officer (Commissioned for Life) and I fought the 1971 Bangladesh War for this Country (India) -- WE, Armed Forces Personnel, fought that War on a foreign soil under the open skies and during the severe Winter Season; WE won that War in less than 14 days, and split Pakistan into two parts. WE carried out ground Surgical-strike in about 14 hours, and air Surgical-strike in about 14 minutes.
I was the first Commissioned Officer to expose Corruption in Indian Air Force (1st Page of Indian Express dated 21.8.1996, and Indian Express dated 30.12.1992 & 24.6.1982, refer). As a counterblast, I was maliciously & viciously harassed and mala fide victimised. Shri Dalveer Bhandari was my Advocate-on-Record in the Writ Petition filed by me before Hon’ble Supreme Court and, in his presence, a solemn Undertaking was taken by Hon’ble Court from the Central Government; but all the copies of the Court’s Order (called ‘Daily Proceedings’) for the day went mysteriously missing from all the 4 records of the Court! But no direction was given by Hon’ble Court to its Registry to ‘reconstruct’ the mala fide missing records, nor was a ‘Report’ called from Shri Dalveer Bhandari (who could not be asked to file a personal Affidavit of Facts by me, because he had, in the meanwhile, been elevated as an Hon’ble High Court Judge, then Supreme Court Judge and now Member of ICJ at Hague), nor was Air HQ’s File (in which the said Undertaking was also recorded verbatim) summoned although I had placed on record a copy of the Daily Cause-List for the concerned date and the relevant contents of the said File.
However, in the facts & circumstances of the case, Hon’ble Supreme Court granted me ‘subsistence allowance’ even though there was no such provision in the Air Force Act 1950 -- which means that Hon’ble Court prima facie found overwhelming Grounds to exercise their extraordinary powers under Article 142 of the Constitution of India, and sent me to Delhi High Court for detailed hearing on merits. Hon’ble High Court, too, pronounced a verdict in my favour.
Government of India appealed to Hon’ble Supreme Court and, on the face of record, the same was allowed due to frauds played upon Hon’ble Court & me by an Amicus Curiae who was appointed in that case by Supreme Court Legal Aid Committee (now called Supreme Court Legal Services Committee) -- coupled with sheer negligence of Amicus Curiae’s Duties to Justice Delivery System.
Due to such Miscarriages of Justice, the first ‘Financial Death’ was caused to me in the year 2003 -- it is a verifiable fact that the persons who authored that death, were given cushy post-retiral jobs by Central & State Governments; and my alternative ‘source of income’ was also snatched away unconstitutionally in the year 2007 -- at the instance of the same Ld. Bench.
Consequently, I am not in receipt of even an Old-Age Pension.
On the one hand, Indian Government approached International Court of Justice saying that another country’s courts have not granted Justice to an ex-Serviceman (ex-Indian Navy) who was not even a War-Veteran, and have also challenged his ‘Death-Sentence’; on the other hand, the same very Government does nothing to persuade even the Indian courts to dispense timely Justice to a War-Veteran and, thus, end his unconstitutional ‘Financial Death’ -- for the past more than 14 years!
My matters are pending before Hon’ble Supreme Court for the past more than 12 years, but it is on record that WHEREAS matters of rich & powerful individuals/ groups were heard even at midnight and are heard continuously over several days, yet this War-Veteran’s matters have not been afforded even a Preliminary Hearing -- even on the Dates already Fixed. And now I have absolutely no money to come to Delhi again, to argue my matters -- this was intimated to Hon’ble 3-Judge Bench through a Letter circulated by the Registry, yet my matter was not heard even on the last Date Fixed, i.e. 18.07.2019 since another matter involving a batch of about 150 Petitions of persons who presumably have sources of income, was being continuously heard from the day before.
With great respect, this is so, even when the present Hon’ble Bench is good, and the present Ld. Counsels for Opposite Parties are reasonable.
Hence, may I request your goodselves to DONATE generously an Amount not exceeding Rs.100 at a time (since I need only Rs.5000 by way of expenses to be able to be in Delhi to attend each hearing), and please remit it by a Crossed Cheque drawn in favour of ‘Registrar, Supreme Court of India’ and please send it to: Hon’ble Chief Justice of India, Supreme Court of India, New Delhi--110001 (INDIA)’ under a Covering-Letter requesting him to devise ways & means that transparently ensure in a time-bound manner the progress made in cases involving Financial Death of, at least, the Country’s War-Veterans -- hope all such Indians as do not feel ungrateful for the ‘supreme sacrifices’ made by US (the Armed Forces Personnel) almost every day, will cooperate, plz; kindly assign your covering-letter the following Heading:
‘Re: C.A. Diary No.33179/2018’.
Alternatively, kindly send your above-mentioned Letters to: Hon’ble Prime Minister of India, Central Secretariat (South Block), New Delhi-110011 (INDIA) -- with a similar Request as above, plz.
Thanks & Regards,
Gulshan Kumar Bajwa
Jai Hind!
P.S.: IF You Want to Reform Justice-Delivery-System, then please DONATE generously
The Petition was also marked to:

Csn Sarma (socialworker)
Please also forward an Urge to H'BLE CJI your specific request in simplified Paras . Pl do not quote the issue of ICJ .
In the same way forward a request letter to H'BLE Prime Minister.
It is true as was told by a Freedom Fighter in 1966 to me , Military was that time itself INFLUENCED BY Recommendations of Political Authorities. Hence to now try SC and PM Please. more