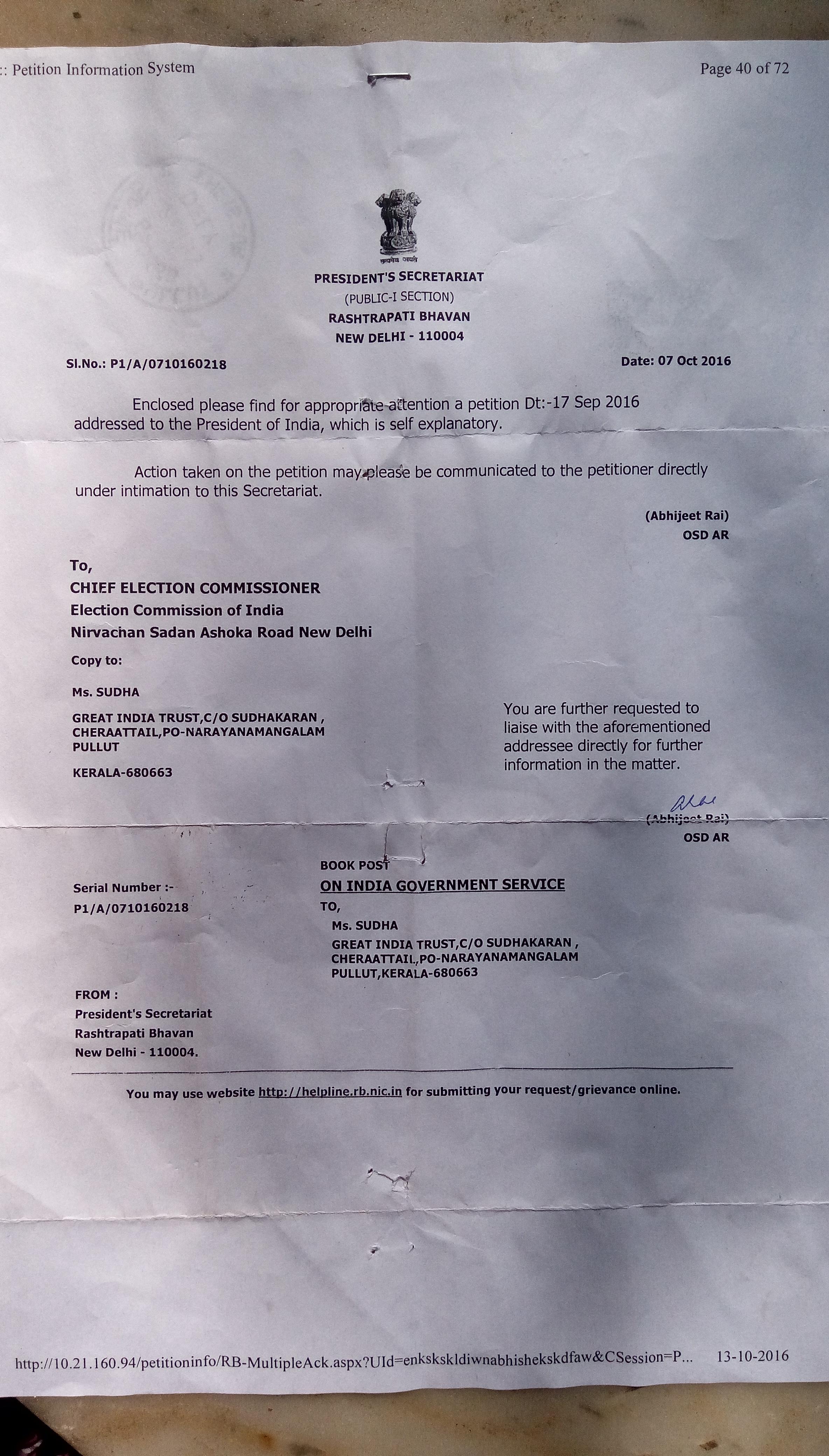 To
Election Commission of India 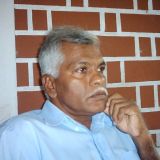 Recent (25/09/2018) judgment by the Supreme Court has highlighted incidence of criminals and corrupt being nominated by political parties as their candidates for elections to our representative bodies and they getting elected as our representatives in parliaments, state legislative bodies, LSG bodies. Government of India too has admitted it through an affidavit in the Court. Many studies and reports by agencies and NGOs had been raising this issue for long.

And we, representing the concerned citizens of India, have been complaining that:
1. In fact our Political parties are not conducting inner-party elections as defined in their constitution. Yet they submit to Commission concocted records to show that they have conducted elections or declarations to that effect.
2. The reigning caucuses and their lackeys are expropriating positions of political power in the concerned parties (and through them in the governments too) by ‘Negating Inner-party democracy’ and substituting it with undemocratic practice of ‘Nominations or forcing consensus’..
3. Such undemocratic practices deny us, we who refuse to be lackeys and sycophants of the reigning caucus, our democratic right to aspire and to contest for a position of political power in a party of one’s choice.
4. Nepotism, sycophancy and lackey-ism are promoted by denial of competition and election, and it cause ‘Character-crisis’, an abject lack of persons of integrity and character, and a dominance by corrupt, criminal, egocentric persons with inferior ethos in the leadership hierarchies of our political parties.
5. It also breeds group-ism, splits and dynastic tendencies in political parties.
• True to the adage ‘Yedha Raja Thadha Praja’ such inferior political leaderships of undesirable ethos are polluting the psych and eroding the ethos of the society and its institutions (including the Election Commission and Judiciary to the common man) causing widespread growth of corruption, criminality, communalism, intolerance etc;
• Our society’s progress to its potential is also being denied by inefficient governance and mismanagement by such politicians.
News about such negation of inner-party elections, expropriation of positions of power by the reigning caucuses, doling important positions out to their near and dear ones and remaining to their lackeys, ensuing bickering in political parties and even sale of party tickets for elections and Rajya Sabah seats too are frequently reported in the media and admitted by many political leaders and officials. Even a former CEC, Mr. Lingdho, and a state GDP had publically lamented about the undesirable qualities of political leadership. Many studies by national & International organizations have confirmed it. I had dealt them in detail in my letter to the Commission since 2002 through 31-8-2010.

Even Registrars of societies are sending its representatives to monitor elections in the NGOs registered with it, if & when any complaint is lodged to it on misconducts in such election. Elections to the political party leaderships, and the quality of persons so elected are much more important than elections in an NGO; it is of paramount importance to the quality of governance, national security-&-integrity and progress of the society and Nation.

Yet, my humble question is, why Election Commission stay content with just taking a declaration/report, from the political parties that they are conducting elections according to the inner-party democratic standards, that too even after my repeated complaints all through last 15 years? Why Commission refuse to actively monitor the conduct of such elections? If the political parties do not believe in, and behave according to principles of democracy how can we allow them to participate in the most important and basic democratic processes of our society – elections to our representative bodies? How can we expect governments formed by such politicians govern us democratically?

*** Is it the way Commission determines whether our political parties are structured and committed to principles of democracy and ensures inner party democracy in their functioning? Being a statutory authority with judicial powers, the Commission has the power to monitor and enforce the inner-party elections in all the political parties registered with it. Commission’s refusal to monitor and enforce inner-party elections, after knowing that political parties are blatantly negating it and are resorting to undemocratic practices to expropriate positions of political power, is nothing short of abdication of its declared authority and duty, cheating the nation, blatant corruption of a different kind, ineptitude and favoritism to the political bosses. Few of the commissioners in the past had shown that they can withstand political pressure and brought few desired reforms in the elections and functioning of parties.

I request the Commission, purely on the national interest, sans any personal agenda - in the changed environment of renewed awareness on the need for political reforms to reform India, after suggestion for a simultaneous elections to Parliament and Assemblies, repeatedly raised by the Prime Minister and supported by the President - to favourablly reconsider our long pending prayer to enforce and monitor periodical inner-party-democratic elections in a transparent way to produce a more competent and fairly virtuous political leadership to the nation and society to lead us to a ‘Greater India’ true to our rich history and potentials.

With Regards and expecting an earliest action in the national interest,

Secretary, Great India Trust
The Petition was also marked to:

Csn Sarma (socialworker)
Since 2 decades EC Seized about 1.1 Crores per Constituency AS PER NEWS IN MEDIA. The Escaped total Sums-up to another 2 Crores.

All Constitutional Bodies , Governing Bodies , Social Leaders , Intellectuals, etc know at least those viewd news or paper. AT LEAST 20% OF THEM IS ENOUGH TO HAVE CHANGED REGULATIONS. But , many fear and feel afraid to move SC . more

Sudhakaran C K (Great India)
20% of what do you mean enough to have changed the regulations sir?
total fund spent in elections? if so how mony can change regulations? more
Jun 06

Sudhakaran C K (Great India)
Please remember Dr. Rajendraprasad's words: "if our elected representatives ate men of integrity and character, they can deliver good to the society even if this constitution is defective. but if they are lacking ..."
So we should single out the most important factor, the most basic one.
that is the degradation of the political leadership, or filling up of the leadership hierarchies of all political parties with the lackeys of the reigning self serving caucuses. if we can induct the competent and virtuous men with integrity and character in to the leadership hierarchies of our political parties, it will automatically bring in such persons as candidates to get elected as our representatives.
If that happens we would have good governors and good governance.
that is the only way to bring in necessary changes in our constitution and society.
so please let us focus all our attention to this most burning issue. more
Jun 05

Sudhakaran C K (Great India)
Yes. We should approach Supreme Court.
'But all legitimate issues' ... that is too wide to get proper attention, hence resolution.
Let us un-bundle them, determine priority and focus on the most important and least controversial one of them.

wrong type of political leadership, as predicted by Dr. Rajendraprasad, would corrupt everything else. so correcting it is is a prerequisite for the successful implementation of any other reform.
Also it is the lease controversial as all political parties are bound by their own bylaws/constitution and Election commission is bound to assure that they are doing it properly. But, as mentioned in the petition, Political Parties are not practicing it or Election Commission is not supervising or verifying it to ensure...
So it is easy for supreme court to order them, the Parties to practice and the Commission to standardize, enforce and supervise to ensure that it is strictly practiced.
That would end the Nepotism, lackey-ism hence the dynasties; infuse competent men of integrity and character in to the leadership hierarchies of our political parties and purge the not so competent and that would reduce corruption too. more
Jun 06

Csn Sarma (socialworker)
This is why BJP opted Reforms on all, won majority over 23 Parties in 2nd phase. SC had to confine that the Powers and Performance of EC Will be taken up in next hearings.

Let us move SC or CJI in June/July . A Senior Advocate also is necessary to put-forth all LEGITIMATE ISSUES. . more
Jun 05

Csn Sarma (socialworker)
I too written to CEC, CEO on 2.8.13. To CBI and ACB . Also urged H'BLE President to intervene before it goes to Marshalls OR OTHERS.
President on 15th August accurately addressed his great concern over Leaders quoting Gandhiji ' s advises ; advised people to be alert intime to urge the needs.
BJP in its attempt succeeded bringing in public awareness in 2014 started diplomatic management MOST IMPORTANT BODIES INCLUDING JUDICIARY ALSO realizing the need of upholding States Authority and Empowerment of INDIAN ELECTION COMMISSION as is evident from different Directive Orders to CEC in last 2 months.

HOWEVER WE SHALL TRY , TRY , AND RE-TRY MOVING Indian Election Commission AND SUPREME COURT OF INDIA till :-
Electioneering is re Regulated...
Political Parties Memorandum, Accountability and declaration of Audit Report.....
Conduct and Disqualification of Contestants...
Performance Code of Elected Members...
Regulations on Disciplinary and Penal Actions against Political Parties AND Elected Members...
REVISION OF VOLUME OF PUNISHMENTS ON OFFENSES RELATING TO ELECTIONS....
together with Speedy Trial of Cases relating to Politicians and Political Parties ARE REGULATED IN ACCORDANCE WITH THE OBJECTIVES OF CONSTITUENT ASSEMBLY, MANDATES AND PREAMBLE GUARANTEES OF CONSTITUTION . more
Jun 03

Csn Sarma (socialworker)
Majority Party Elections are on either dictatory OR on Nomination. Real discussion within Party and Election gone away with the wind from the day Congress became I, O, S, J, Urs etc. in 70s. more
Jun 03