Why should I cut back on my Heartburn / Acidity Medication?

Why should I cut back on my Heartburn / Acidity Medication?


DEAR DOCTOR :
For years I’ve been taking a PPI twice a day for heartburn. My doctor wants me to cut back, or stop altogether. But the idea frightens me. Do you think it’s possible?
DEAR READER:
To anyone tormented by frequent heartburn, not taking your daily tablet — or tablets — of omeprazole (Prilosec) or lansoprazole (Prevacid) might seem like a scary idea. These and similar drugs, known as proton pump inhibitors (PPIs), are the foundation of treatment for heartburn, also known as gastroesophageal reflux disease (GERD).
GERD occurs when stomach acid backs up into the esophagus. I’ve put an illustration of how reflux occurs below.
Reflux
Gastroesophageal reflux disease is an often-painful condition that occurs when the lower esophageal sphincter fails to do its job of keeping digestive juices in the stomach. When the sphincter relaxes too much, irritating stomach fluids surge up into the esophagus, sometimes causing inflammation and a painful burning sensation behind the breastbone known as heartburn.
PPIs work by shutting down the acid-producing “pumps” in the stomach. They sharply reduce acid secretion and therefore the irritation it causes when stomach contents back up into the esophagus.
A number of my patients whose GERD was tamed by proton pump inhibitors (PPIs), and now have no symptoms, have been able to successfully taper off of them. This is more likely if they also make the lifestyle changes that reduce the symptoms of GERD. Those include:
• Lose weight. Being overweight is the leading cause of reflux.
• Avoid eating large meals. Instead, eat more frequent, smaller meals.
• Avoid eating two to three hours before your normal bedtime.
• Sleep with your upper body slightly above stomach level by elevating the head of the bed slightly on blocks or by using a wedge-shaped cushion. This reduces pressure on the opening between the upper stomach and base of the throat. Just propping up your head with pillows won’t work.
• Avoid certain foods that can trigger heartburn. They include chocolate, caffeine, alcohol, acidic foods, spicy foods or fatty foods. Try cutting them out for a while to see if it makes a difference.
• Completely avoid foods with mint. Mint may loosen the passageway from the stomach to the esophagus and allow acidic material to back up into the esophagus and throat.
What’s the problem with remaining on the PPIs indefinitely? There is some evidence that long-term use may increase your risk of developing a type of pneumonia called aspiration pneumonia, and a potentially serious intestinal infection with the bacteria called C. difficile. It may also cause you not to absorb enough calcium, magnesium, vitamin B12 or iron.
To taper down on your PPI, start by gradually reducing the dose and frequency until you are taking the lowest dose once a day. Then, gradually replace the PPI with an H2 blocker, an acid-reducing drug. Examples include cimetidine (Tagamet), ranitidine (Zantac), famotidine (Pepcid) and nizatidine (Axid). Switching to an H2 blocker may help you to stop taking a PPI.
I don’t think we have solid evidence of serious side effects from long-term use of H2 blockers. The evidence of adverse effects from long-term use of PPIs is somewhat stronger. But suppose you’ve been free of GERD symptoms for several months on a PPI. If you’re committed to lifestyle changes, it’s worth talking with your doctor about how to gradually taper off your PPI. more 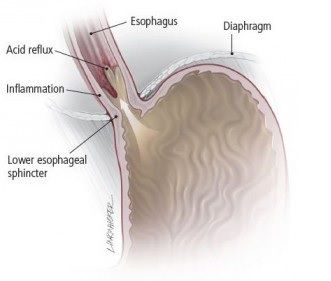 Umesh Kumar (Professor)
Kindly note that PPI or H2 Blockers can be taken on empty stomach only. Taking them immediately after food or refreshment will reduce their digestion. If acidity disturbs after sometimes of taking food, liquids containing salts of Calcium, Magnesium, Calcium and Simethicone like Gelucil MPS, Diegene etc. can be taken or their tablets can be chewed. Earlier Aluminium & Sodium salts were also mixed, but of late their side effects have been noted to delete them gradually. Among salads Cucumber (Kheera and Kakri) can also be added in my previous post. more
Apr 02

Umesh Kumar (Professor)
Quite useful post. Besides omeprazole (Prilosec) or lansoprazole (Prevacid), the other PPIs can be Pentaprazole, Rabeprazole, Esmoprozol. PPI reduction can be from 40 mg twice a day to once a day then to 20 mg twice a day to 20 mg early morning on getting up with water and then to H2 Blockers like Ranitidine 300mg OD to 150 mg OD(Once a day). Request kindly intimate the order of effectiveness among PPIs as above and H2 Blockers like cimetidine (Tagamet), ranitidine (Zantac), famotidine (Pepcid) and nizatidine (Axid), meaning thereby their potential in decreasing order to switch over from PPI to H2 Blocker. Some foods which also reduce acidity like papaya, guava, naturally sweet curd, salads like radish (Mooli), Turnip (shalgam), Carrot, cabbage, lettuce, beetroot etc. (not their juices) and a little soda-bi-carb can also be taken in your food habits. more
Apr 02

Raja Chandra (With age and Experience, hope to contribute and also gain knowledge.)
Thank you all for appreciating my post. Best Regards. more
Apr 02

Urmila Guliani
I am a patient of chronic acid reflux. This informationis very useful. THANKS! more
Apr 02
View 7 more comment(s)
Post a Comment