What is the difference

Just before the Delhi elections, BJP government has announced additional compensation of Rs.5 lakhs to 1984 sikh victims. They have also announced regularization of illegal hutments. What is the difference between BJP and other parties? Is it ethical to give this kind of bribes to voters before elections? How is it different from distribution of laptops by Akhilesh or 2 Rs. Idli, 5 Rs sambar rice scheme of TN govt all freebies to electorate at the cost of government? BJP used to call itself a party with a difference. Do you see any difference? more
Helpful Transforming India Dec 30
Viewed by 29
View all 14 comments Below 14 comments

Csn Sarma (socialworker)
IT IS NOW ALL OF OUR COLLECTIVE RESPONSIBILITY TO AT-LEAST LIST-OUT AND NOTIFY EVERY DAY THE INCIDENTS OF ALL THE FIELDS OF OPERATION WHICH AUTOMATICALLY HELPS WIN OUR GOAL CATCHING THIS LOCAL CIRCLES AS A PROOF OF COGNIZENCE TO BE HONOURED BY THE NECESSARY BODIES OF THE CONSTITUTION. Our continued participation through these localcircles.com will certainly lead the bjp also alongwith us for the sure goal. more
Jan 28 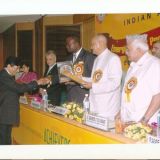 Jayakrishnan Alambath
We have still to take firm action to root out corruption, black money circulation and inflation. Although there are clear solutions for these evils no steps have still been taken in this direction. more
Jan 25

Csn Sarma (socialworker)
1. The real cause for the neglect of 1984 Sik Victims is an afraid of early & factual case finlisation irrespective of the DUTY , NEED OF EQUALITY PREVALANCE , AND THE BASIC RESPONSIBILITY OF OPERATION OF THE LAWS. Further, it also proved the HIDEN MONORCHY OF THE RULERS. It has also sent an adverse message to the Society to opt such practice for a long existance in political powers. The carry-out of the case proceedings over a too long period also adversly sent a message for such further issues even by way massive revolts, retaliations. The present redressal aid must not be considered as a part of political scoring in the light of the stage of the case and the loss to Victims if the bulky reformation necessities are taken into account. And, this is not a welfare benefit of a political campaign like that of the Welfare issues of Tamilnadu allowing lowcost food. Even this also certainly not come under election trick since this is only those to EAT TO SURVIVE unlike resorting to Rs.two per kg of rice ; Rs. one per kg of rice where there are hidden roots to RE-BAG THROUGH THE HIDDEN PATRONIZED CORRUPTION .
2. The patronage of those think themselves as Kings HAS BEEN STARTED AND WAS PUT TO CLOSURE DURING THE 2014 NOT ONLY GENERAL ELECTIONS BUT ALSO THE LATER ASSEMBLY ELECTIONS OF THE STATES as proven.
3. The Leader to be friendly with the Citizen is already RE-ESTABLISHED BY THE PRESENT PRIME MINISTER SRI NARENDRA modi
i. Through his call of message in USA staging the need of the People's Government through the People like to ESTABLISH " the Democracy by the people " but for the People ;
ii. The Establish of a continuous process & practice of inviting PEOPLE'S GRIEVANCES, SUGGESTIONS, AND the People's SOLUTIONS towards the requisite Transormation of the Laws , Rules , to achieve the REAL, PERFECT, FACTUAL, AND UN-DEVIATED GOOD GOVERNANCE to the people & the Nation through WRITTEN PROPOSALS THROUGH THE LOCAL CIRCLES WEB-SITE MADE A VAILABLE, is the strict proof of moving with and being with the People UNDOUBTLY.
iii. Some of his individual decissions are proving his dedication to the People and the Nation unlike the Root-slogans, befitting issues that have been in practice for striving to achieve continuancy of political power both at the cost of the people and at the cost of the Country.
4 As is eventually evident from the above, BJP lead by modi will never be a cause for any loss or a suffer to either the People or the Nation for ever. more
Jan 25

Prof.Sanjib Bhattacharya (Executive Council Member ,IATIS (ww.iatis.org ) , Sr.Member nwu.org )
Our leaders have President Obama as special guest in Republican Day but why our leaders can't follow Obama's friendly behavior to all general citizens ? In USA all leaders are friendly to all general citizen but in India there is vast difference between leaders and general people . more
Jan 25
View 14 more comment(s)
Post a Comment