TO START THE PASSENGER TRAFFIC BE WELCOME & TO KEEP THE RAIL TRACKS OCCUPIED :

TOO LONG A PERIOD IT WILL CAUSE RUSTING. At a time when there are not much takers for Shramik Specials .Offer was a wee bit (45 days) late . At Marchlockdown Home states were not ready with the preparations to handle such huge numbers. Now the Home states seem to be ready to accept at a time when the states that have hired don’t want them to go as there is definite hopes of the relaxation of activities slowly .

Now the Returnees to the home states , particularly in the peak summer find it extremely difficult to work in the sun carrying Shovel and Spade as mentioned by them . Most have been working under a roof , like shops, load men, Restaurants and construction labourers . So they say “A man working under shade will feel uncomfortable under shade (Chayawala admi dhoop me aa jaye to dikkat to hoti hei ) ”The wages of Rs. 202/day seems to be insufficient for the labourers as they were earning a minimum of RS.9,000 to 10,000 .

The Migrants have gone through the Misery and Agony of No Job, No Wages , savings dwindling and Rations getting scarce , at the work states -that has pushed them to this decision to return home . As at that time of first shutdown there was no transportation available , many had taken to trekking with their belongings and family , cycling , some in the costal area through boats .

NOW THE CRUX OF THE PROBLEM IS HOW TO JUSTIFY THE SALARIES PAID TO RAIL STAFF (1,88,100 Crores -2018-2019 figures )AND RAISE REVENUE . MOST IMPORTANT FOR THE RAILWAYS . AND ALSO HANDLE THE RAIL UNIONS AMICABLY TO WORK TO THE NEW LABOUR NORMS THAT THE SITUATION DEMANDS.

IF STATES DON’T WANT TO SEND THE MIGRANTS BACK & SHRAMIK SPECIALS ARE NOT REQUIRED , THE RAILWAYS SHOULD

* ADD A COVID19 TAX (THE DELHI GOVT. HAD ADDED 70% FOR LIQUOR ) BUT LET IT BE TRANSPARENT (so that people will willingly pay ).

* CANCEL ALL THE CONCESSION FOR THE TIME BEING (THAT MEANS EVEN THE FREE RAIL PASSES AND P.T.O.’S - this will reduce the number opting to travel )

* THIS IS THE BEST TIME TO REDUCE AND BE DONE WITH ALL THE RAIL PERKS FOR THE MINISTERS, RAIL BOARD MEMBERS AND THE LEGISLATORS (AFTER ALL THEY ARE PUBLIC SERVANTS – THEY ARE TO SERVE THE PUBLIC FOR THE FINANCIAL BETTERMENT OF THE NATION FIRST BEFORE THEIR OWN )

Let us all citizens including the Ministers and Legislators join hands in this austerity drive to lift India from going into Crisis . Jai Hind more 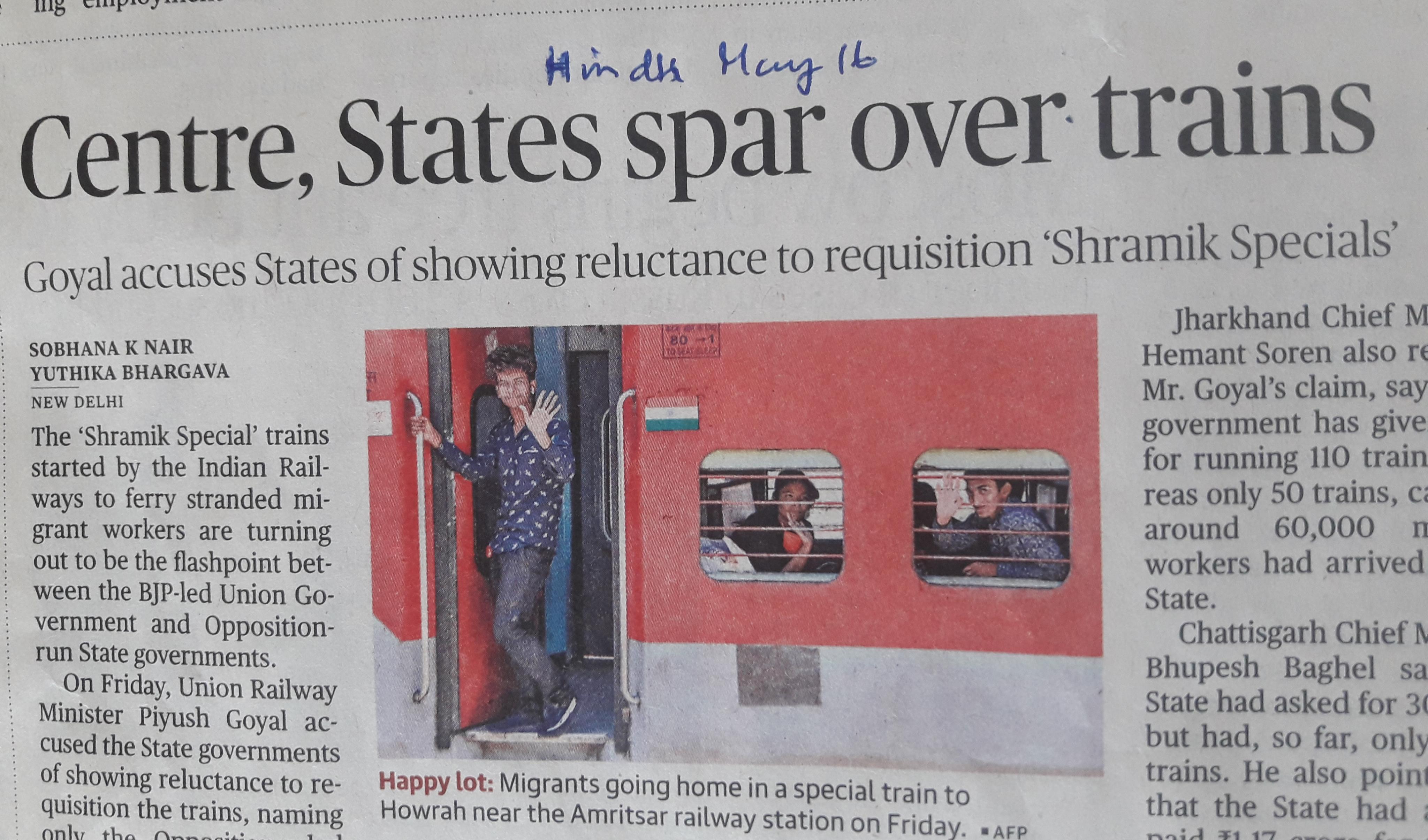 Ramesh Kutumbe
I entirely agree with Shri Jayakumar Daniel (Qualified Yoga teacher and Tour organizer for tourists from Europe and U.S.) that this is the right time to introduce schemes and methods to improve economy of Railways. I agree that all free or concessions availed by Executives of Railway Board and Ministry and other executives, if any, should be withdrawn and I also agree that as the capacity of each carriage shall be reduced due to social distancing norm, journey fare should be increased officially and recorded on the ticket accordingly. Further I think the practice of a high platform ticket Rs. 50/= or more should continue and access to platforms is restricted to ticket holders and in case of senior citizen or differently abled person/s person/s assisting them. All ticket holders MUST report at least 45 minutes before scheduled arrival of train to complete formalities of luggage and ticket checking- number of checking points and staff may have to be increased. Late comers may miss the train. Specific Railway executive shall be responsible for any entry of an unauthorised person on any platform. Similarly Guard or any other executive specified by Railway shall be responsible for any unautherised person in the train coaches. RYK. more
May 20

Rajiv Gogate
Shri Jaykumar, I second your suggestion of removing all free passes and other freebies doled out to anyone -from rail employee to rail minister, MPs MLAs etc. This is a good opportunity to withdraw all such facilities. more
May 18

Jayakumar Daniel (Qualified Yoga teacher and Tour organizer for tourists from Europe and U.S.)
I am just expressing my anguish like most here and not blaming anyone at all . - Immagine walking from middle of India to North , South of Indisto Middle , - and cycling 1,200 kms. - Some lucky ones managed to get train services at least to be packed like sardines to raech their near and dear ones . - Some resorted to getting packed (not boarded ) into trucks. It is ALSO pathetic to hear them dying -run over by trains on the tracks, - by trucks on the high ways while walking and Cycling . - And the Trucks carrying Shrramiks overturning and killing and injuring . This only reminds me of the Exodus during the Indo - Pak Partition and The Burmease Indians treking via the Noth east and perishing in the jungles eating green leaves as there wasnt food . Hope good sensed will prevail over the Shramiks and some efforts are taken to avoid their misadventure . more
May 16
View 16 more comment(s)
Post a Comment