The Engineering behind Fall of Kabul

1.The change of regime was engineered by the US in full public gkare including promises of a transition and interim government

2.The ISI did not subscribe to the idea but asked the Talibs to play along regardless
3.The old guard (Northern Alliance) Amarullah Saleh , Ata Muhammad Noor and Abdul Rashid Dostum were sidelined by Ghani on the directions of Zalmay Khalilzad

4.The fissures in the government were visible in the public posturing of the old guard which smelt a rat from the outset
5. As fighting erupted in Faryab and Herat, ANA and ANDSF fought back ferociously and managed to reverse initial losses

6. A message went went out from the Presidential Palace asking the ANA/ANDSF to stand down as a power sharing agreement was being worked out.
7. The Taliban true to their nature used this ceasefire to encircle ANA/ANDSF units and in some cases executed surrendered troops

8. There was total lack of cohesion at the command level and sustained infowar by the ISI ensured that troops deserted in large numbers


9.The Americans did not provide close air support (CAS) and delayed overhaul of key aviation assets which were critical to resupply ANA/ANDSF troops.
9. The decisions taken in Qatar and Washington were not communicated to CENTCOM in full.This led to a situation where the US Troops in Afghanistan did not get enough time to deploy demolition teams to destroy sensitive war fighting equipment
10. This was deliberate done because any such step would have led to widespread panic amidst the Afghan Forces who were battling the Taliban across a widely spread put front

11. The Taliban did not trust the Americans from the outset and made a lightening dash to Kabul
12. This was a classic "Hug" your opponent move which ensured that it had a good chunk of Foreign citizens and troops encircled in Kabul.A great bargaining chip to get the Americans to stop bombing their positions in the North and the West
13. This truly surprised the Americans as well a Ghani who was looking at a power sharing agreement with the Taliban alongwith Abdullah Abdullah and chief negotiator Hamid Karzai
14. Ghani was tipped off by his well wishers and made a quick exit allegedly with a lot of money (Critical in buying his Asylum)
15. Saleh had a Plan B in place by end of June 2021.However the Taliban put paid to his plans by taking Herat , Mazar-i-Sharif and Kunduz in quick succession.This cutoff all traditional Northern Alliance gateways
16. His retreat to Panjshir has landed him in a precarious situation as he doesn't have strategic depth to fall back. It is a position which he may have to abandon if he does not manage quick territorial wins to enable a land bridge to Tajikistan
17. ANA/ANDSF troops loyal to him have been unable to make way to Panjshir in the numbers he would have liked.His supply lines are non-existent and his allies look on helpless as supplying him by air is a very risky affair (not impossible)
18. The ISI has coached the Taliban well in projecting a more humane face.Ironically WAPO and NYT seem to be lapping up and are displaying new found love for Taliban 2.0
19. The Chinese will keep their cards close to their chest until the last American Soldier leaves Afghanistan.They will pay the ISI a bomb to get their hands on sophisticated American hardware


20. Ironically this isn't the first time that the Americans have left behind military hardware.The value of equipment left behind during the fall of Saigon was roughly estimated to be $1Billion in 1975 more 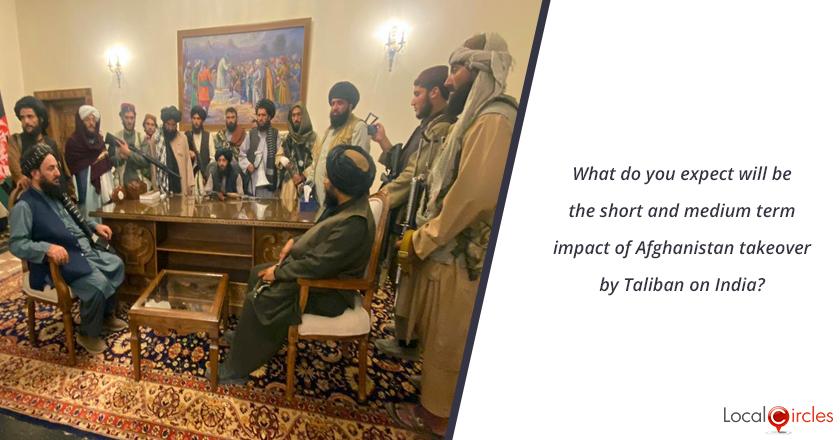 What do you expect will be the short and medium term impact of Afghanistan takeover by Taliban on India?
Participate in Poll.
Helpful Surakshit Bharat Aug 19
Viewed by 1552
View all 8 comments Below 8 comments

Raja Aggarwal (Lawyer)
excellent insight. no news channel has analysed in so much depth. more
Aug 31

Anonymous Circle Member
The way Kabul was run over by Talibans without any resistance and the President managed to leave Kabul safely with his family and lot of money, indicate conspiracy and betrayal in the whole episode. It may be a betrayal to the people of Afghanistan by the President and the Americans. Developments in Afghanistan may be a lesion for the countries who depend on USA for their security. more
Aug 19