TECHNOLOGY AVAILABLE ,YET POLICY MAKERS FAIL TO USE TO PREVENT MANUAL SCAVENGING :

Technology has advanced leaps and bounds in Sanitation , We the Citizens have been waiting long for the Government to Catch up and end the nasty practice of Manual Scavenging .

Newer Technology as FSTP [Faecal Sludge Treatment Plant – Septic Tank ] can be combined with Omni processors for safe treatment of waste .This come in the wake of the present Death of 5 near Chennai in a Septic Tank . India has also lost as many as 1,500 Lives in Septic Tank Cleaning between 2014 -2016 . We are yet to get the Statistics after 2016 .

Does the numbers look too small to attract the attention of Policy makers / Governments ? Or Availability of CHEAP LABOUR that is making the policy makers slowing down efforts to DEVELOP TECHNOLOGIES that can safely remove and transport the waste . Or any other popular reasons ?

This attitude of the Governments not to go for New Technology and continue with Manual Scavenging , has resulted in such deaths of the workers on one side ; but also refusing Human Dignity for such workers .
According to National Commission for Safai Karamcharis (NCSK), the statutory body 123 people employed in hazardous forms of manual scavenging lost their lives while at work since An inter-ministerial task force has counted up to 53,236 people involved in manual scavenging in India, a four-fold rise from the 13,000-odd such workers accounted for in official records until 2017. Of the 53,000 identified so far through the national survey, only a total of 6,650 have been confirmed officially by states in keeping with the tendency to under-report the prevalence of this practice.

The addiction to drugs and alcohol among sewer workers high almost 100% . As the job entails working in repulsive conditions ; they have to take alcohol before they start the work .

It is a real Challenge for the Policy makers and Government . If they are going to be Indifferent to the
LAW AGAINST MANUAL SCAVENGING CITIZENS WILL HAVE TO DEPEND ON THE COURT TO STEP IN & UPHOLD THE LAW.
No one is yet to come with a P.I.L. on the Issue. more 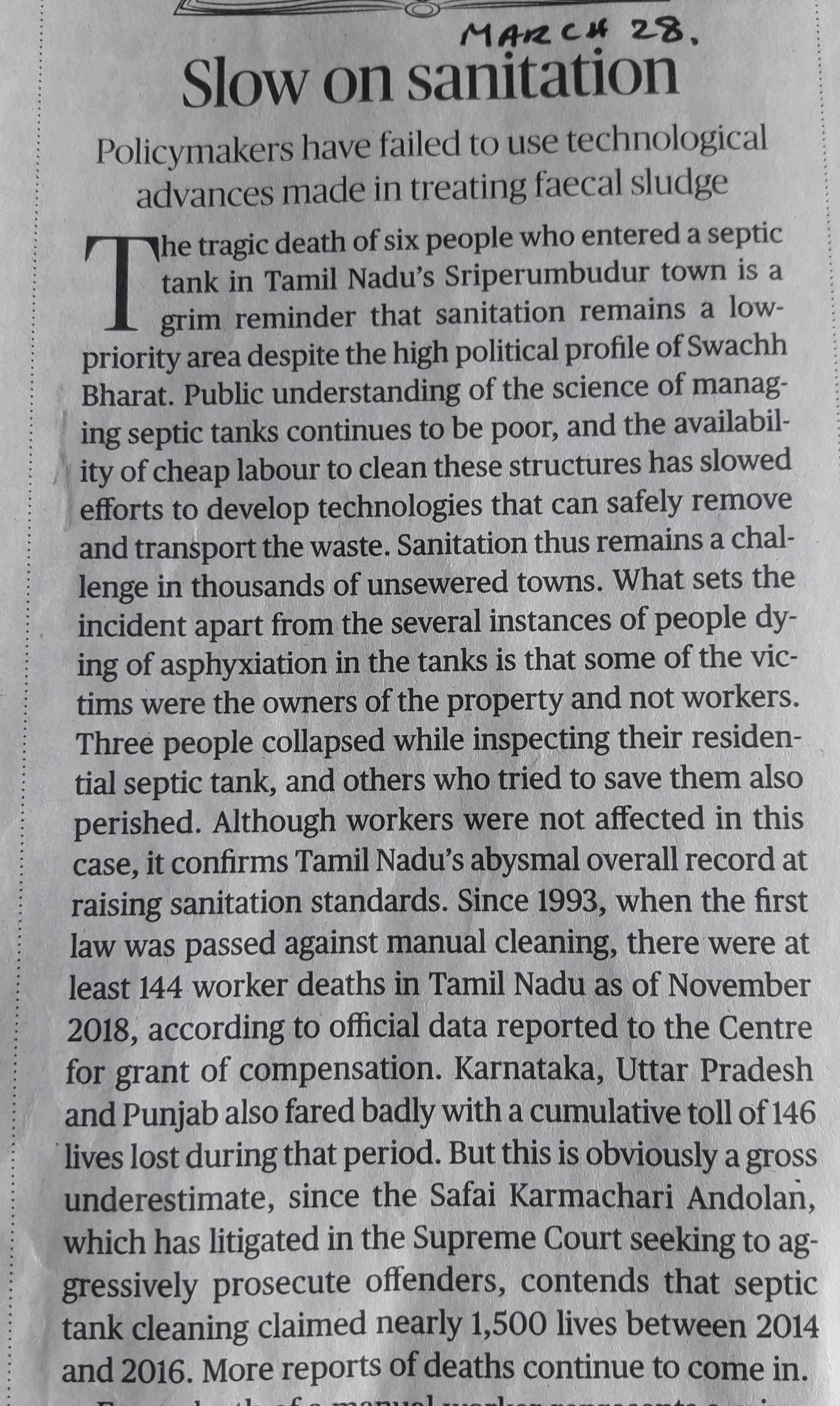 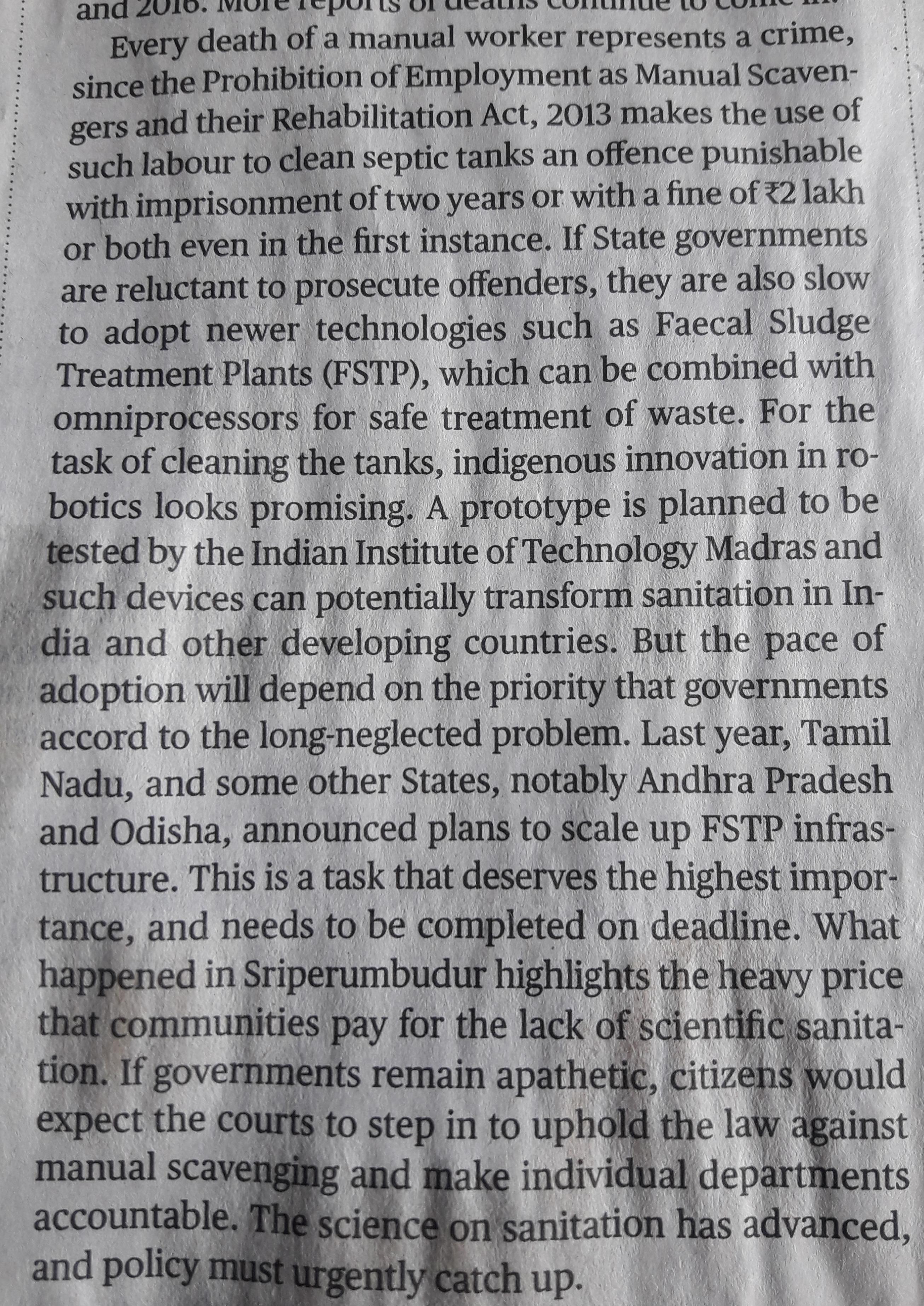 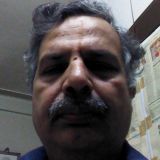 Sanjay Saigal
Blaming Government is easy as it frees us of all our responsibilities. Individually we are not doing our bit which leads to these deaths. If untreated & unfiltered water is discharged into drains it creates a havoc with the system. Private sector can come forward to provide services.
Applying any new technology on a scale of India is a work in progress & will take a decade or two. When it comes to investment in city infrastructure Almost for 60 years we have been at best found lacking. Now with smart city concept initiative it's going on in 99 cities but it will take another decade at breakneck speed. more
Mar 30

Rayasam Govind
All dear friends, all political parties are more interested in votes only. For that they give reservations,wrieoff loans to Farmers,write-off dwacra loans,give amount s for marriage s of various castes, communities, give grants for piligrimages, and whatnot. In that these parties vie with one another. When these are me where are fund to improve infrastructure. So no machineries will be purchased,no roads are laid.So forget improvement in the systems, and only let us pray for the illfated souls rest in peace. Kindly ecxcuse,for putting the present situation more
Mar 29

Jayakumar Daniel (Flat G, Jothi Apts., 2048, H, ..., Tour Organizer For Inbound Tourists From U.S.A. Europe.)
There are many more expenses that could be reduced : Legislators' perks , Security , Pension even for serving 5 years and the subsidised food in the canteen . The equipments mentioned by Mr. Nalluri will be just a Miniscule of the expenses mentioned above . more
Mar 30

Murthy Nalluri
The attached message was first posted by me in Swatch Bharat Visakhapatnam couple of years back.
Under Ground Drainage system cleaning

The sad demise of a Contract worker at Siripuram in a Manhole exposes the procedural lapses. How can we become smart with out having basic procedures?
We all are aware that any closed sewage system contains H2S which is a dangerous gas and concentrations above 10PPM can cause devastating effects on Human Body. How ever a procedure has to be followed to bring the site in to a working environment which was not followed in yesterdays accident. The statements after the accident from the concerned authorities do not talk about check list/ procedures which shows that there are lapses in the system. It is very sad to note that same accidents took place a couple of times in the recent past.
In my view the following equipment to be available with Municipality /Authorized contractor before doing such jobs in closed encloser where oxygen percentage is major a concern.
1. A gas detector H2S or multi Gas gas detector.
2. Breathing apparatus with adequate user training
3. Forced Ventilation like high speed Air Blowers to reduce the concentration levels
4. Personal Lifting gear/Safety Belt for quick evacuation in emergency situation.
5. Water Tanker for flushing the system.
Further there should be accountability to the concerned officer which is possible by introducing a permit to work system to be issued at the site. more
Mar 29

VAITHEESWARAN SANKARANARAYANAN
Basically, local bodies are responsible for sewage cleaning system. But none of the local bodies are focussed on this though swatch bharat mission is highly talked about. Of course infrastructure in this field is also very inadequate. Workforce involved in this area are also not sincere and cleaning up operation does not take place at regular intervals. This can avoid emergency situation like especially overflowing chambers scene across the roads inviting many water borne viral diseases. The situation is same even in cities under "smart city mission". Unless otherwise local bodies demonstrate sincerity, this will be a distant dream. more
Mar 29
View 15 more comment(s)
Post a Comment