NOW THE NAIL IS HIT RIGHT ON THE HEAD:
It was done by the Driver of the BOV(Battery Operated Vehicle).
The Garbage Vehicle Driver, who is at a far lower plane of in the Decision making Process opened out his mind when the Press took on the Garbage Clearers on the matter of Garbage not segregated properly.

As of now, baring very few Housing societies are STRICT ABOUT GARBAGE SEGREGATION AT SOURCE. Many aren't able to as there is not enough co operation. All the 3 types are put together and dumped, including Diaper also. Some revolt and say that “We want to keep our premises clean. What are garbage clearers for. WILL SOME ONE SAY ALSO THAT THEY ARE FOR COLLECTING SEGREGATED GARBAGE , KEEP THE LOCALITY, ENVIRONMENT CLEAN ; it will not be inappropriate to add ONLY COLLECT SEGREGATED GARBAGE.

There was also comment on the handling and sorting out of Garbage with bare hands.

ELECTIONS,CONTROVERSIES,PUBLIC HEALTH ISUES ARE PART AND PARCEL OF THE GOINGS ON IN A COUNTRY.BUT FOCUS ON SWACHH, ENVIRRONMENT SHOULD NOT TO BE “PUSHED TO THE BACK BURNER” AT ANY TIME.
- Jai Hind more 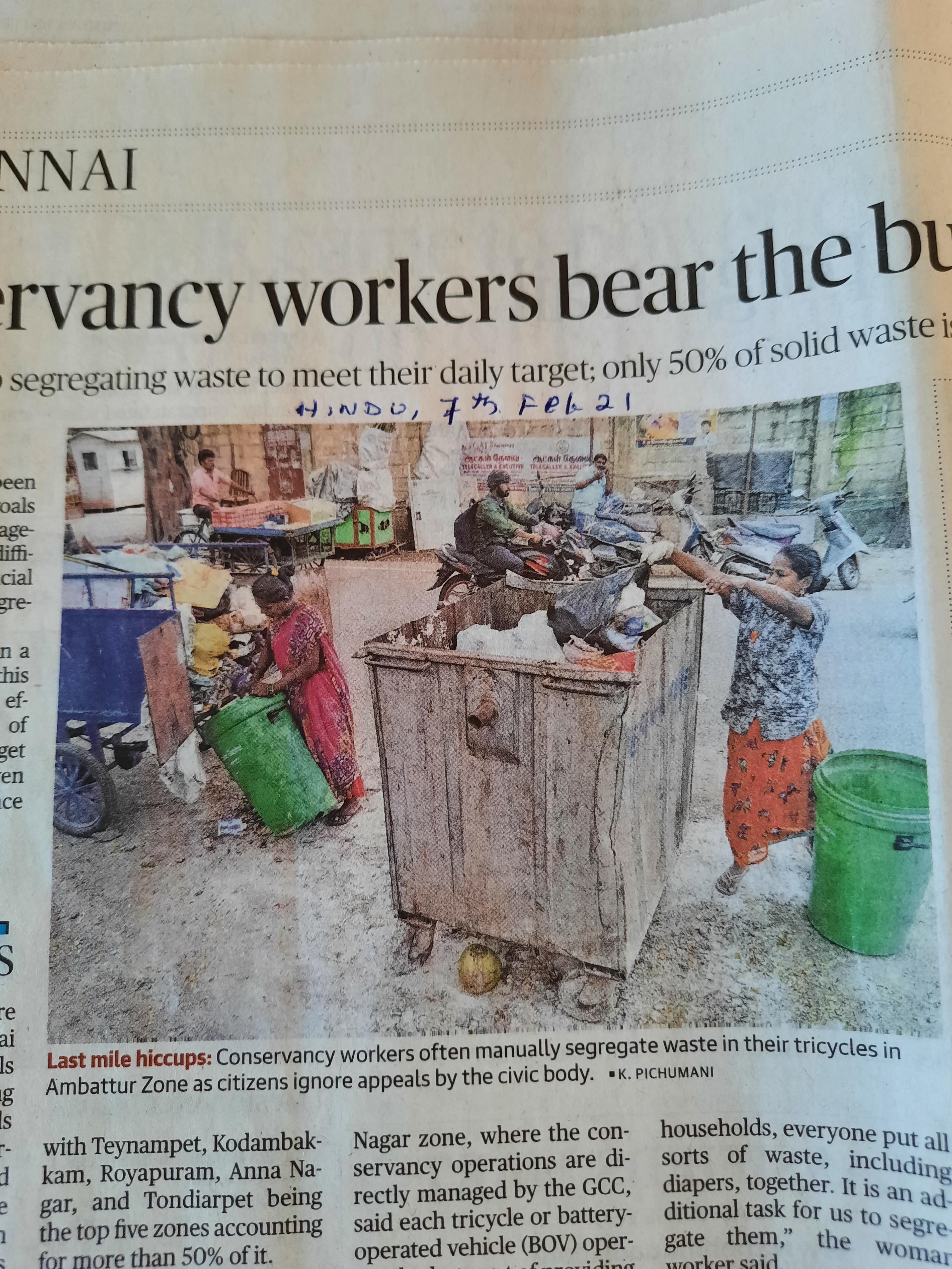 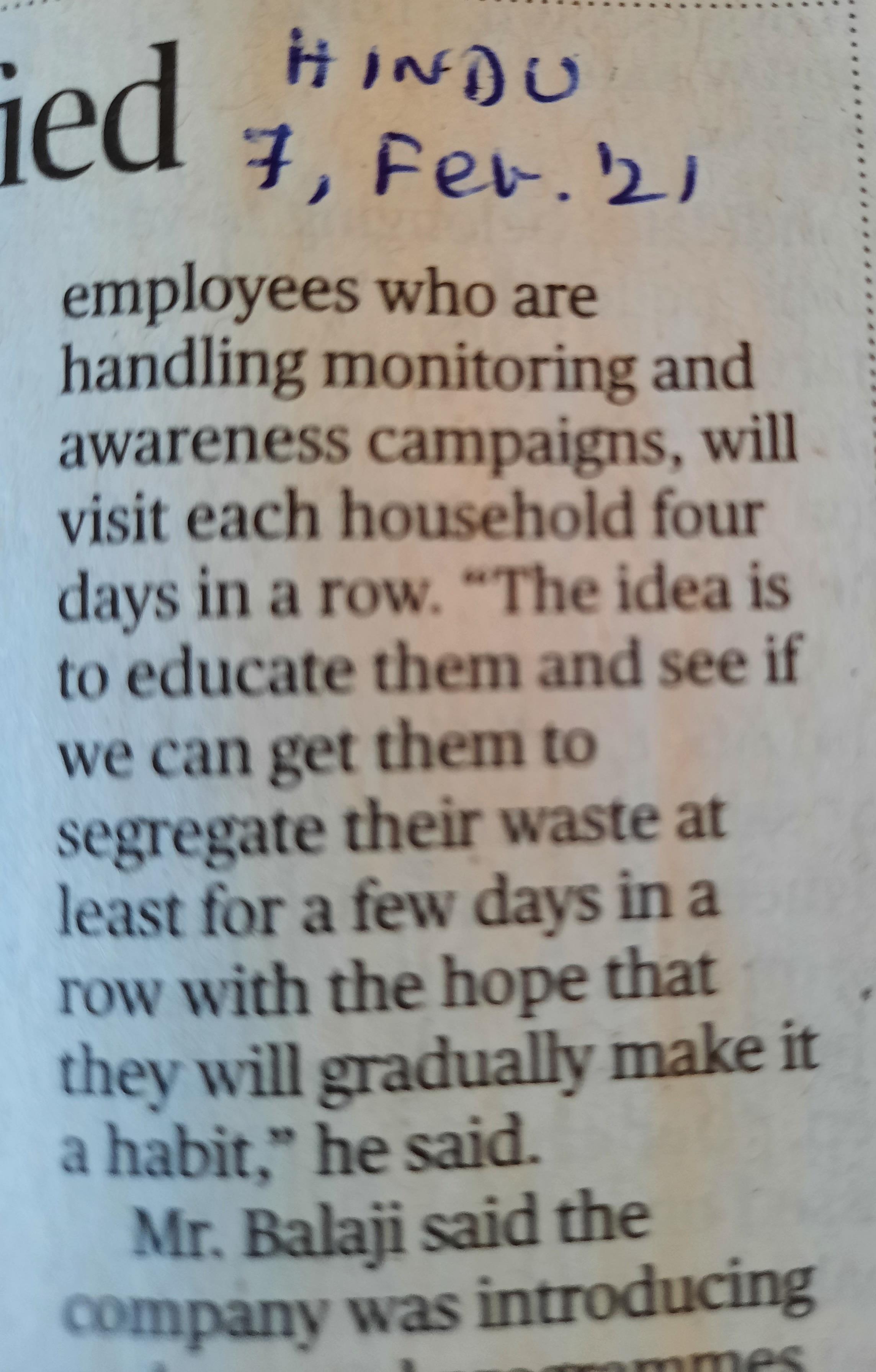 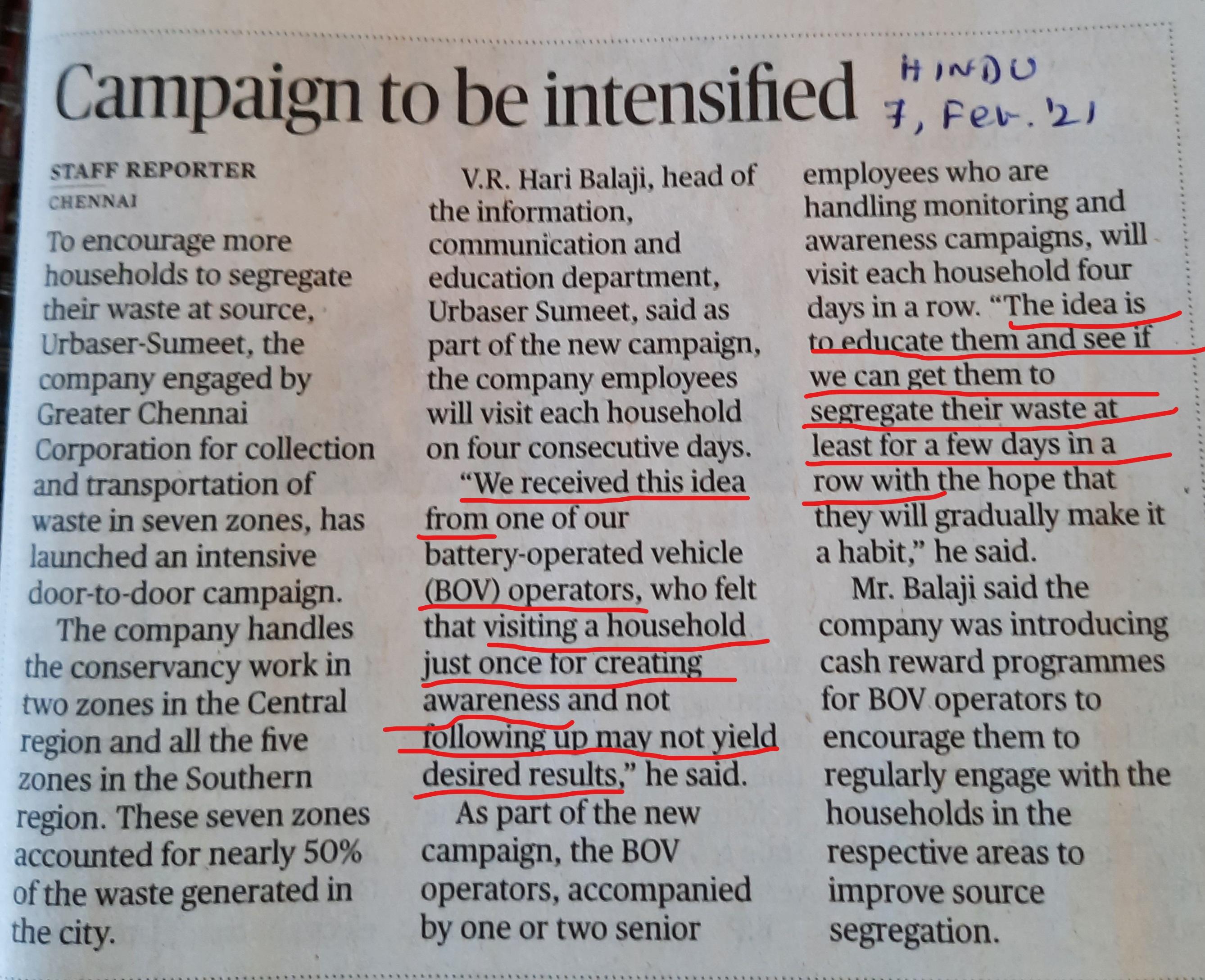 Ranjit Biswas (C-46 Radhaswami Nagar, Raipur,...)
Though in our city the local Municipal Corporation provided two sets of garbage bins to every house holds a few years back for segregation of garbage, the collectors mix up them while uploading in his vehile. As such, our people have stopped segregation, for which the Municipal authorities should be blamed. more
Feb 10

Gurparkar Singh
This problem will be solved only when the parents start teaching their children about cleanliness. We are bothered about our own cleaning without bothering for the society. When will we Indians start using common sense, that's the question more
Feb 10

Huge housing Societies have started having theirown segregation operations and also recycling mechanism. This may not br e possible in other smaller multistory buildings that within city limits with space crunch. Nothing liketo start with method of penalizing the defaultes as being done to comply with Mask use. The best method would be to convert the Garbage collectors themself as counsellots to deal with the stuation accordingly. Because the officials will hesitate to open up boldly. CITIZENS HAVE TO UNDERSTAND THAT PUBLIC HEALTH/ HYGIENE IS EQUALLY IMPORTANT AS PERSONAL HYGEINE. more
Feb 08

Ramesh Kutumbe
I fully agree with post of Shri Jagannatha Rao We must discipline ourselves. First we should not generate, if possible, any waste and attempt to use recycle waste as far as practicable. Any generated waste should be made easy to dispose and handle segregation is one of such methods. However not disposing refusing or not taking unsegregated waste does no solve the problem. We have to search for a solution that will work. In my opinion one possible solution is given below : A] Take a photograph of non segregated waste with the disposer, ask for segregation charge of Rs. 200 for doing segregation. give a receipt of Rs. 200 to person paying the charge. Report the matter and deposit Rs. 200 with corporation authorities. Corporation should pay Rs. 100 to segregater immediately on a voucher. This will keep the area around even non segregater clean avoiding nuisance to neighbours. B] Municiple Corporation to educate that particular rsident and also inform him that repititive violation would attract additional service charge. R.Y. Kutumbe. more
Feb 08

VAITHEESWARAN SANKARANARAYANAN
The amount of garbage generated across is huge and people did not segregate it over centuries and it will take time for them to change. So to speed up the process is to do it through automation. Besides, recycling unit must be installed near the place of generation based on the quantum collected. By this, hygiene can be maintained. Employment generation can take place which will have good impact on the economy. more
Feb 08
View 13 more comment(s)
Post a Comment