Everybody loves a good productivity hack. Clever tips on getting more from each working hour are a well-loved genre, from complicated to-do lists and tomato-shaped timers, to advice on mindfulness and the merits of going barefoot. That’s not to mention the supposed gains in creativity and concentration from surrounding your desk with the colours red and blue.

But there is one action that seldom appears on these lists, despite a growing volume of evidence to suggest it has a pronounced effect on both physical and mental productivity: working in a location with good air quality.

Particulates — especially fine and ultrafine particles below 2.5 micrometres in diameter — are widely recognised as a long-term health issue, even if many people do not appreciate the scale of the harm or how extensive the evidence has become. Inhaling particulates leads to a higher risk of dementia and causes one-third of all deaths from stroke, lung cancer and heart disease, according to the World Health Organization.

Recent research, however, suggests air pollution is not just a long-term health issue that causes unpleasant diseases as you age. It also stunts child development and appears to have an instantaneous effect on productivity: you become slower and dumber while breathing polluted air. This should have a profound effect on attitudes to air quality.

Humans are notoriously good at discounting long-term health risks from cigarettes and alcohol. But to have your cognition impaired right here, right now, as you try to work or study is something else. The evidence increasingly suggests that particulates do not just penetrate the heart and lungs but also the brain.

The health impact should be enough to motivate action. But if confirmed, these effects also change the economics. Ill-health at the end of life subtract from the sum of human health and happiness, but damage to young brains suggests a direct, accumulating effect on productivity and human capital. Tackling particulates, in other words, might raise not just output but its growth rate.

The immediate, on-the-day effects of air pollution can be surprisingly large. The economists Avraham Ebenstein, Victor Lavy and Sefi Roth show that a modest increase in particulates on the day of an Israeli student’s high school exams is associated with a significant decline in exam results. These exams shape a student’s life career so that brief exposure to air pollution has lasting consequences, leading to an average of 0.15 fewer years of university education and ultimately $30 less in monthly salary.

Every child has to take the exams and the date is fixed, so richer students cannot dodge the pollution and the authors can control for factors such as school quality. Consider the extremes parents will go to to improve their child’s exam results or get them into a better university. Yet their life chances can be blighted by a single day of air pollution.

Another recent study by Tom Chang, Joshua Zivin, Tal Gross and Matthew Neidell looks at call centre staff working for the same company in different Chinese cities. On polluted days, productivity fell by 5 to 6 per cent, and the effect was evident at air pollution levels often found in Europe and the US. Again, consider what else companies will do for a 5 to 6 per cent gain in productivity.

How safe is the air we breathe?
Then there are the horrible effects found in many studies of child development. One shows that living in an area of the US with high carbon monoxide pollution does more harm to a baby in utero than the mother smoking 10 cigarettes a day. A study of almost 3,000 schoolchildren in Barcelona found that kids exposed to more air pollution suffered slower cognitive development. This affects the poorest most of all, but nobody who lives in a city is safe.

In recent years, climate change has come to dominate environmental policy — for good reason. Yet that is a challenge for which humans are psychologically ill-equipped. There are essentially no gains from stopping climate change, only losses averted, and the problem is totally resistant to individual action. Nothing a single person does makes any difference.

Tackling air pollution, on the other hand, benefits everybody and is amenable to action at every scale. What is more, it appears the benefits will be felt straight away. Individuals can install filters to improve indoor air quality. Small groups can monitor and publicise local air quality: once particulates start to affect property prices, watch how seriously people take them. Cities and nations can regulate polluting vehicles and power generators. Since most particulate emissions come from the same fossil fuel sources as greenhouse gases, it is also a policy to tackle climate change, framed in a way more likely to find public favour.

If there was a pill available that improved exam results, reduced your chances of dementia and made you more productive at work, it would sell by the billion. Since reducing air pollution is such a pill, why not take it?

Financial Times
News, analysis and comment from the Financial Times, the world's leading global business publication
Helpful Together Against Pollution Sep 18
Viewed by 2171
View all 12 comments Below 12 comments

Vasudev Shanbhag
This is easier said then done as most if not all the available solutions are not very pocket friendly. I do have a solution in terms of measurable reduction in the particulate matter pm 2.5, however not many people if even aware by reading the posts like above would spend a pretty penny for getting a solution. Somehow the thinking is the solution should be provided by someone else. more
Sep 21

Subash Chander (adesh institute of medical sci..., No)
Air pollution surely leads to health hazard. But we cannot ask the industry to stop production, but we can- ( govt.,) advice through qualified engineers, with regular visit to industry, in the pollution field to stop feeding polluant in rivelets, just outside the factory, gasses, dust with particle in the atmosphere. These personal should be given proper training may be a few months awareness, in this field along with law to make aware the one creating pollution. Municipality of a city , if not efficient, can be responsible for lot of pollution, in form of allowing house hold waste to accomodate, dusts in streets and roads, and pets dropping etc. We should look in to all aspects. For city check, may create special post with qualified resposnsible person also. more
Sep 21

Gopabandhu Mohapatra (216, Shantinagar, Jharapada, B...)
Yes, tackling air pollution, on the other hand, benefits everybody, but the industries are causing more pollution, but we are insisting motor cycles to conduct 6 month pollution test or pay fine. What about the Industries ??? more
Sep 20 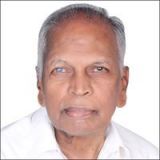 Nagaraja Mandalgere
True-pollutents are entering our atmosphere in dangerous proportion leading to breathing problems, less of oxygen too. we have to increase green coverage both in forests and urban areas more
Sep 20
View 12 more comment(s)
Post a Comment