Only we have to “LEARN THE ART OF LIVING WITH CORONA VIRUS “ said Hon’ble minister Nitin Gadkari .

Every health expert says we have come to live with Corona Virus . It is one more Virus , Bacteria , Parasite doing the rounds , the world over . Like we have learnt to live with Common Flu, H1N1, Ebola, Nipah virus . Chicken Pox, Earlier Amoebiasis, Worms, Malaria, T.B., Leprosy and so on. Most of the diseases have Vaccines now . As we the vaccines are to come by the end of the year for this also till then be a little caution not to get infected and not to spread and follow the guidelines the Health authorities have given .

There is a comparative study between the 2 pictures . One Taken in the month of March and the other now , as the dates indicates .

The first one people run (or made are made to run) jostling for a place to Travel . As they are not guaranteed of a place and allowed to fend for themselves. It is made a “FREE FOR ALL” – though they pay for the travel , none is traveling ticketless – only thing they are allowed to infringe into the Reserved Compartments , making life miserable for the legitimate travellers .

LOOK AT THE SECOND ONE TAKEN IN MAY AFTER SEVERAL SUCH PICTURES APPEARED IN THE MEDIA & LOT OF PLANNING. AND THE BANDRA STATION INCIDENT ALSO CONTRIBUTED TO THE IMPORTANCE INSTILLING OF ORDERLINESS IN THE MINDS OF AUTHORITIES , IN THIS CASE THE RAILWAYS .

ALL THAT WE WISH IS LET CORONA SEVERITY REDUCE BUT NOT THE SERIOUSNESS OF RAILWAYS TOWARDS CLEANLINESS AND CROWD MANAGEMENT . more 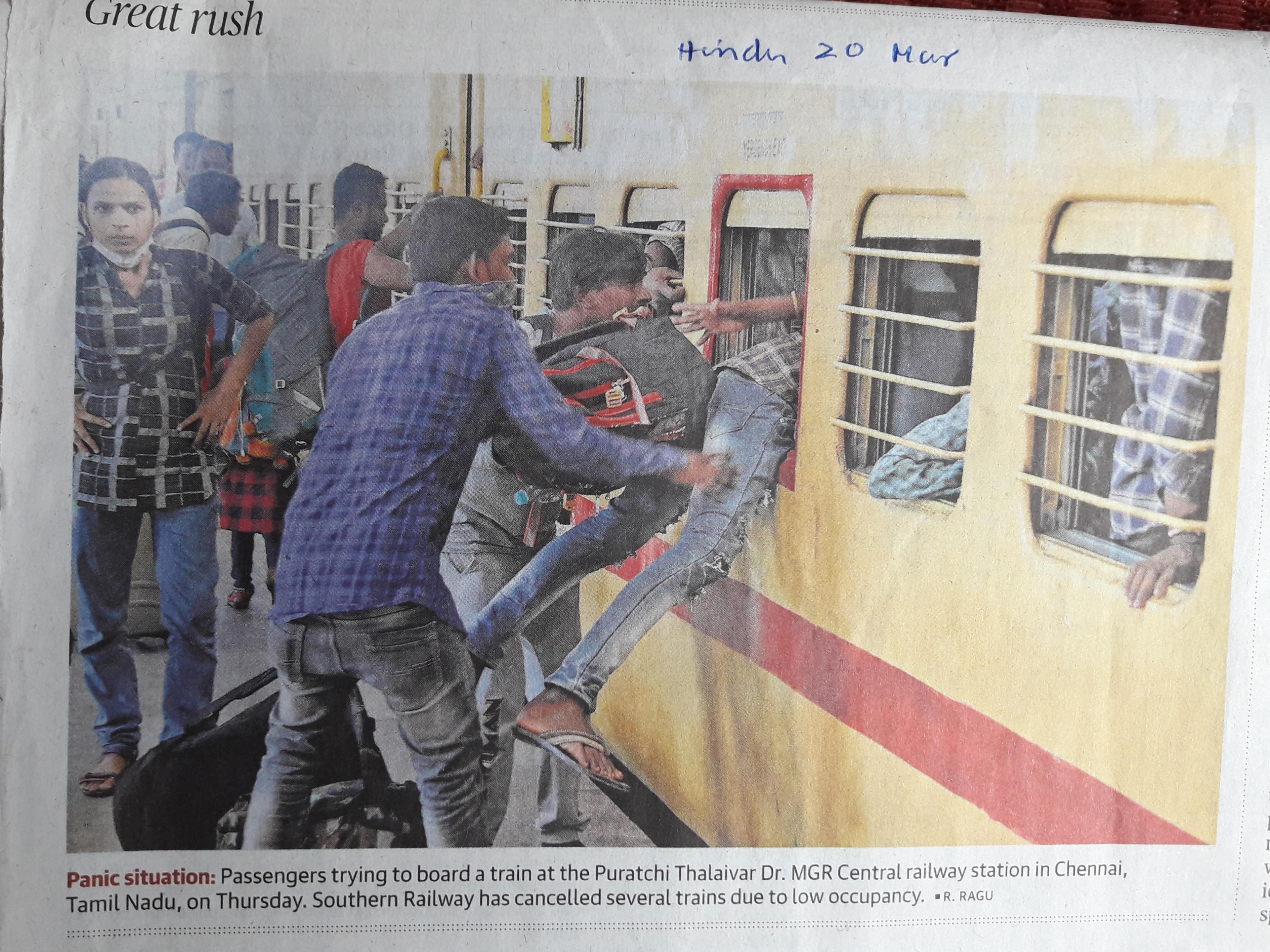 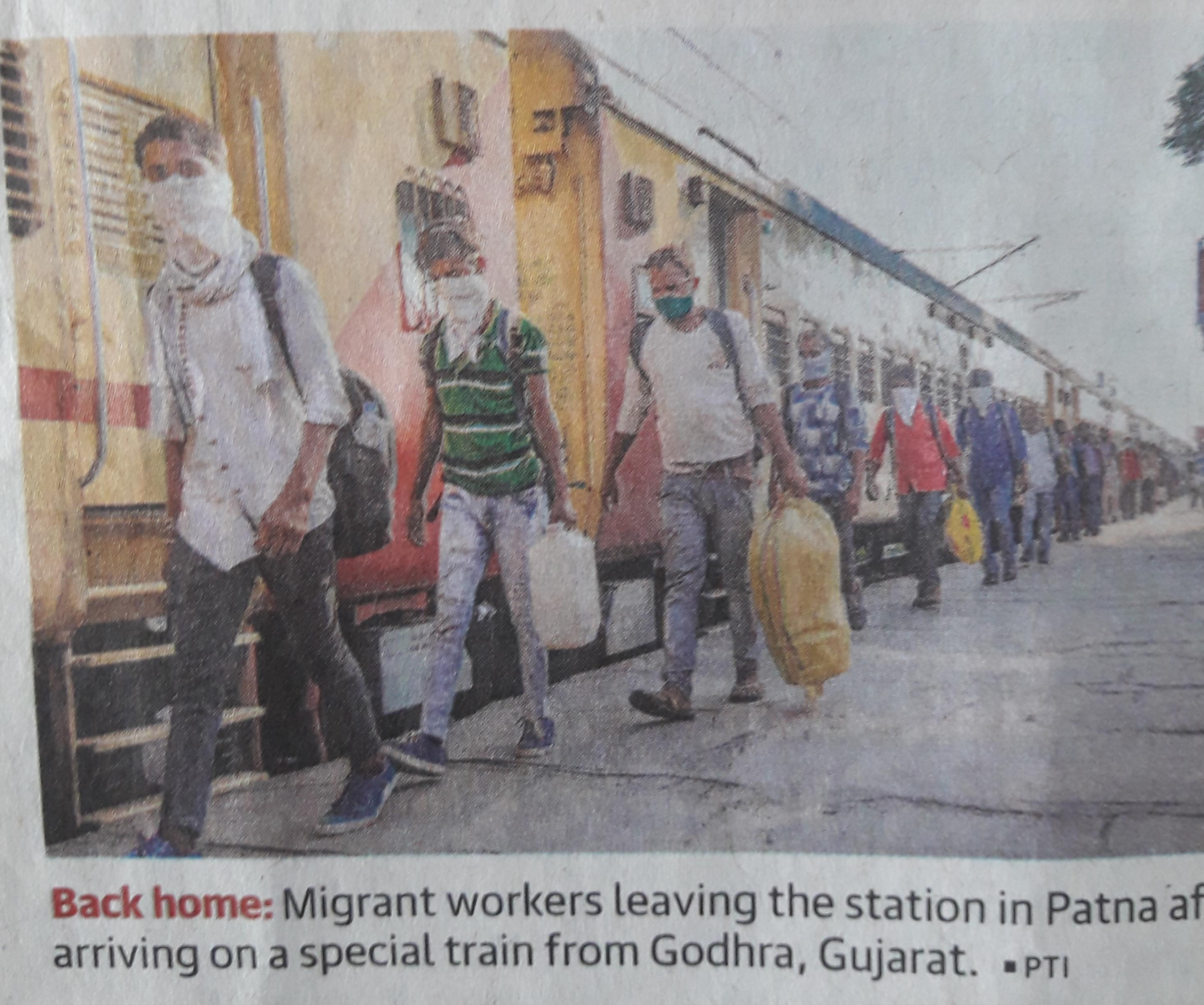 NATARAJAN KRISHNAMURTHY (Engineering Consultant)
Mr. Daniel, I have one more suggestion to you. Please appeal to all Indian citizens (Except for those anti Indian & anti Modi and opposing center for each & everything) to go for Yoga, explaining that EXERCISES strengthen muscles only, whereas YOGA strengthens body muscles & mind and therefore Yoga is a better option. All the gyms can provide for Yoga also, which can flourish their business better, when things get back to normal. For those politicians, it is not worth having a debate, especially for TN opposition fellows, whose mentality we all know. more
May 20

Ranjit Biswas
People are gradually becoming accustomed in living isolated from avoidable things and practices and to pay attention towards the family and their wishes and choices. We are bestowing our times and extending helping hands towards domestic jobs whatever small they are but were being completely neglected and over looked until the Covid19 compelled us. By the time the lock down exercise is over and the nation as well as the entire globe returns to normal(not likely to be normal in the near future), our life style will certainly become changed and people start living normal family life which was practically forgotten by majority of us for decades joining the run for becoming modern and wealthy to own all sources of becoming artificially happy. Carona has certainly shown the mankind its limits and helplessness even to fight the disease. As stated in the post and various experts' reports came out in recent days, we have to learn living with Carona like other dreaded diseases with only difference is that we need to be more cautious in our daily life to keep ourselves free of Carona, which is most contagious unlike other diseases. Another study on the disease says that the mortality rate of Carona is much less than other dreaded diseases and that most of deaths are caused out of fear rather than deadliness of the virus. Therefore, it is most important to overcome such fear and fight it boldly and then only we can return back to our normal life. more
May 18

Jayakumar Daniel (Qualified Yoga teacher and Tour organizer for tourists from Europe and U.S.)
We being retired people , we never miss any function . In a month it will be 3 to 4 . Now we maintain the public health discipline. Lucky the terrace is accessible ,so the tenants have our timings to perform some physical activities . After denying physical contracting we have been having fun 2/3 times a week of get together through Zoom . Birthday parties, Quiz sessions ,sing song sessions etc with even friends and relatives across the oceans . I have made a poking to talk to at least one person each day to keep myself & the other thrilled . more
May 16

Arun Gupta (Mechanical Engineer in the field of Quality control/Quality Assurance)
Request all members to please see the details and SCAM of the century regarding corona virus by Dr. Vishwaroop Roy Chaudhary on Facebook/his website. Even on youtube also some of the videos are available because most of the videos has been deleted by you tube because he has revealed the reality behind corona virus more
May 16

Arun Gupta (Mechanical Engineer in the field of Quality control/Quality Assurance)
Jokers can predict only prank..so i hope joker must have understood what and who is he?
I just shared my views if u disagree that's your point of view do not use the language which you do not like to get the same type of response.
I have gone through all videos of Mr. Vishwaroop Roy chaudhary on youtube, and one more advise if you wanna be a good orator then be a good listener first, just like you I am sharing my views.
Arranging noble prizes and bharat ratna is in the hand of government if u have approach then plz proceed do not use absurd language personally on this social media platform.
if you feel content is in appropriate about vishwaroop you can complain to IT cell of government bodies. more
May 21

Shibdas Mallick
Better arrange noble prize+ Bharat-ratna for him next year. more
May 18

Shibdas Mallick
Let's not advertise jokers in local circle who thinks all are wrong and only he is intelligent. COVID is not nutritionist's cup of tea. more
May 18

Ramesh Arora (Security)
The pandemic should also be used as godsend opportunity to institutionalise an altogether new normal in our civic sense. It will help immensely all the stakeholders in good goveronance and healthy and responsible attitudes to civic conduct of all the citizens. more
May 16
View 23 more comment(s)
Post a Comment