The UK SARSCoV2 variant is reported to be 70% more transmissible harbors a set of mutations in the Spike protein––the part of the virus that touches the human ACE2 receptor and allows the virus entry into our cells. One mutation, N501Y, allows Spike to bind ACE2 more tightly

Another mutation, P681H, is near Spike's "Furin cleavage site" Unclear what the mutation does, but the location is significant because it's where enzymes "process" Spike, helping virus infect airway cells & enable efficient human-to-human transmission

these mutations are accumulating in the backdrop of another mutation, D614G, which has become dominant, globally, and has enhanced infectivity and replication fitness. It's even been shown, experimentally, to transmit faster through droplets & aerosols in hamsters.

These are just a few of the many mutations this virus is accumulating. Every time it replicates, we give it the opportunity to mutate. And if those mutations render drugs and vaccines ineffective, which is possible, we'll be in a lot more trouble.

Csn Sarma
China Lab has 2 Other Viruses 3 months ago. Medicine to COVID suspects Result in side effects some Serious too.
Both issues need to be Analysed. more
Dec 23

SHANKAR SARAN
The government of India should come out with the action plan for the safety of the citizens at the earliest. more
Dec 20

Dipak Subarwal
GOI has already said it , but Indians don’t follow, deny virus a “habitat” it will die without it .....WMD ....Weapon of Mass Destruction....Wash,Mask,Distance ....it’s up to us. more
Dec 20 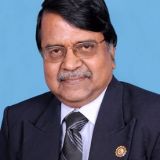 Muthiah Lakshmanan (Chartered Accountant)
Troubling News; if so what is the use in taking the vaccines? where is the end? more
Dec 20
View 7 more comment(s)
Post a Comment