Are attached. What should the Govt to do ensure this doesnt lead to increase in bribery rates of police and instead a large majority starts follow rules. 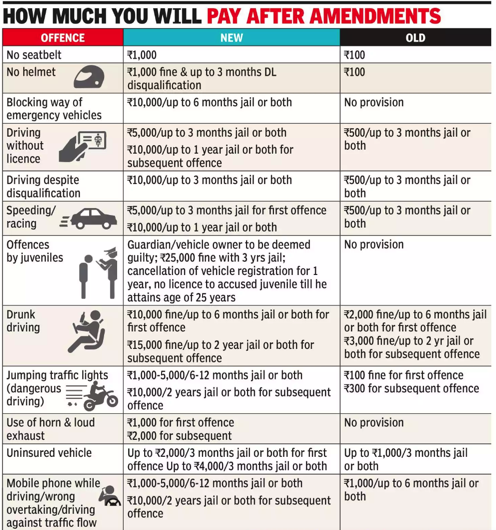 Charudatta Sahaje
Many State Governments are yet to come out with a Notification in this regard and therefore, these penalties are not enforceable although Traffic Police have started its enforcement. Less such things are left to the discretion of Traffic Police. We only understand the action backed up by CCTV footage. For this, all vehicles' are to be linked to mobile phone numbers.
An idea of making an entry in License/RTO records can reduce bribery. more
Sep 29

Rajiv Gogate
Since it is accepted that the new fines will lead to new bribery rates, why dont we give a sizable chunk of the penalty to the policeman himself. This way he will not lose much and the penalized will not save much, e.g. if Rs 70 out of the Rs 100 fined go to the police, there wont be much charm in taking Rs 80~90. Neither will the person at fault be interested in paying Rs 80~90 to avoid paying Rs 100. more
Sep 04

Susheel Paul
It is invariably the weakness of our government implementing than passing laws. The public knows that the chances of corrupt practice by the law enforcement agencies have increased by increasing the fine. What is needed is use of all kinds of media blitzkrieg to the citizen about this social discipline along with CCTV monitoring and on the spot fine and entry in the licence book. Yes the licence card should be made into a an e-book where the offence is entered . It would cut down on offender being let off after receiving some bribe and repeat offenders to be duly punished with cancellation or suspension of driving licence. Such a practice was there post independence. more
Sep 03

Anil Chandhok (Participant citizen)
In India for every misdemeanor, we make a new law, apply penalties, and for every insignificant act we threaten with imprisonment. Obviously, this leads to corruption. So the first thing is to make the laws simple, easy to follow and not to start with the assumption that the law has been contravened knowingly and willfully.

Of course the above applies to traffic offenses too as far as corruption is concerned. Instead of paying Rs. 1000 fine, its cheaper to pay Rs. 500 to policeman. Instead of going to jail, its better to pay a few thousands to policeman.

The policeman accepts these bribes because he himself has paid huge bribes to get his job, his posting. Plus he knows that in many cases the offense is inadvertent and the penalty, especially imprisonment is too harsh.

Firstly attack the problem of flouting of Traffic Rules by ensuring stringent checks before issuing a driving license. Next, make it possible to follow the rules. Then find a way to keep track of the offenses committed by a driver and consul him/warn him. Finally if there is a repeat offender, fine/imprison as is appropriate. more
Sep 03

Shivashankar Shetty (Engineer)
Yes we have stringent rules & regulations for everything,but poorest & worst enforcement of the law & systems.This is the root cause of all the evil in the society... more
Sep 03
View 48 more comment(s)
Post a Comment