Everyone is equal to law. Either a driver or a owner. While violations if the person owns the offensive vehicle then this question does not arises. If the vehicle is driven by someone other than owner then it requires the following questioner:
1) Whether driver have valid Driving Licence of same category .? If yes NO Problem.
2) If driver is drunken owner can't be hold the responsibility for the act of others.
3) If not wearing the seat belt or any other misconduct of the driver ,owner do not have the act of liability for his staff. The responsibility is on Moral basis, to face the situations of others misconduct.
4) As owner has to act because the vehicle is his property and which can be ceased or toed to the custody of law enforcement authority.
5) This all depends on the gravity / intensity of the offense to act accordingly.
6) Simple e.g. If a central government's vehicle is a offender we can't take responsible to President of that country, as he is the sole authority of all the property of central government . It is a person responsibility who is on the wheels....!!!.
Simply the driver is the first accuse , then the owner because he is indirectly involved in this act. But the major loss is of the owner because the vehicle in the scene is his/ hers property ,and not the person on wheels . Punishment by act is to the driver and the indirect major loss is to the owner if the vehicle goes into custody.....!!!
Moral of the story : Act as a responsible citizen either a driver or a owner...!!!. what role he or she plays....!!! more
Helpful Surakshit Bharat Sep 11
Viewed by 1790

VAITHEESWARAN SANKARANARAYANAN
Certainly, I agree with Mr. Satish Patil that the driver on the wheels must be held responsible and made to pay the fine and not the owner of the vehicle in case of traffic violations except for minors driving the vehicle. Hope no owner would employ a minor as driver.

I do not agree with Mr. Sunil Puri stating that the department should be penalised in case of trafic violation involving government vehicle. Above rule must be applied here as well. In the news item wherein Governor of Kerala has order the payment of fine in case of traffic violation involving government vehicle. It is not clear from the paper clipping that whether the governor asked the concerned employee to pay the fine or the office of the governor. It has to be the employee.

I also disagree with Mr. Rana who has suggested that the penalty to be reduced by 50% which is very wrong as in India, it is observed that citizens change their attitude for good only if heavy penal provisions are implemented in true letter of its intent.

So, law enforcers, must be sincere and honest to implement the rules and regulations as intented and then only we see a disciplined India. more
Sep 12

Satish ji, good you followed it up with your poast as resource one . More details you have given . But in the case of under age driving , the parents are penalized . These are the undeciplined children who dont care for the parents advise or warning . They should n't be let of with just a warning in the court or police station . They should go through a course of counselling by professionals AND THE PARENTS SHOULD BE CHARGED FOR NOT BRINGING UP THE CHILDREN PROPERLY .

In some cases where the owners have been magnanimou enough have come forward as the former Governor of Kerala.

IT SHOULD SERVE AS A ROLE MODEL FOR THE VVIPS's & CELEBRITIES , WHOSE DRIVERS GET AWAY WAY EASILY .

May be a repeat for some , but for the benefit of others. more
Sep 11

K C Rana
Th Driver, except under age, should be held responsbile for all traffic violations.
He should not drive the vehicle unless all the required documents are not in
place. Passing on the guilt on others, will not solve the problem of traffic
violations. However, the very high rates of fines should be reduced by 50%,
especially for pollution, helmet and seatbelt as these violations do not put
the life of others in danger. more
Sep 11 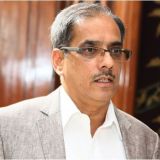 Sunil Puri (Secretary in Club 26, Noida)
I think it is the responsibility of the employers to ensure that their employees are following the rules, if they have given their vehicle to employee. In case of government vehicle violating the rule, concerned department should be penalised, not the President of India. more
Sep 11

Satish Patil (Technical Consultants / Cyber Law advisor)
Yes Sunil ji, any how man behind the wheels is first important not the one who owns the vehicle....True.!!! more
Sep 11
Post a Comment