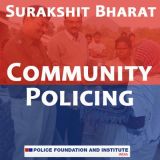 Below are the key issues, root causes and solutions as identified by you to improve life of police personnel in India. Kidnly review and share any additional specifc inputs you have on the subject.

We look forward to your inputs and will soon be taking them up with the key Government stakeholders so actions can be taken on this front.

1. Some major Police reforms need to take place immediately
2. Their salaries should be increased, especially of the constables who end up taking bribes due to the low salary
3. A cap should be put on the maximum number of hours a police man can work in a week
4. They should be given at least 1 weekly off
5. The working environment at the police stations should be improved and brought at par with the international standards
6. The maximum number of cases that could be assigned to an officer at any given point of time should be fixed
7. All the necessary paper work should be converted to online forms
8. They should be given regular training to better their computer skills
9. Light weight and high quality bullet proof vests should be given to all the personnel who go out in the field
10. Various community initiatives should be taken to improve the image of police in the eyes of the general public
11. Like in the corporates, a human resource department should be created to take care of the welfare and motivational levels of the police personnel
12. All the vacancies in the police department should be filled at the earliest
13. The entire department should be given access to top-notch technology to make them more efficient and destressed
14. Tie ups should be made with international departments like NYPD and Scotland Yard so that our officers can learn from them and raise their standards
15. Improving the intra-department coordination should be made a priority
16. The police promotions and career path, especially of the non-executive staff should be defined
17. Community policing and police-citizen partnerships should be given a boost by the state Governments
18. Proper police housing and hospitals like the one for defence forces should be provided to police personnel
19. Penal code should be amended to enable police to use firearms to contain spread of a threat
20. Air borne assistance should be available to ground reconnaissance party both for tracking, assault and co-ordination with road block setup. Every district should have two helicopters
21. Post of police driver should be abolished as an unproductive waste. They should drive their own cars.

1. The police department is under staffed
2. Police reforms have not happened for decades now
3. Cases are thrusted upon them and they do not have any choice but to accept them
4. The department is still not technologically savvy
5. The law says that police can use their weapons only after someone uses their weapon against them
6. Government wants the police to work like Scotland Yard but not equipped with the sufficient and modern communications instruments and arms and ammunitions
7. A police officer has to work in accordance with hundreds of laws
8. The police staff is not properly trained to cultivate informers, tackle with mob, to investigate the cases etc.
9. Due to some bad elements in police department other police officers are underestimated, disrespected and abused
10. Police staff coming to another area/state do not take local police into confidence leading to incomplete investigation
11. There is no proper promotion policy for non-executive police men, leading to stagnation on the same post for 10-20 years
12. Many of them are being ill-treated by their superiors
13. They are not periodically trained on latest laws, procedure, behaviour etc.
14. Community policing and police-citizen partnership is non-existent in India which means only police personnel and that too manually have to keep the vigil on everything.

1. They don’t have a fixed work timing
2. They are over worked
3. Sometimes they work for weeks at a stretch
4. Multiple cases are given to them at the same time
5. A lot of time consuming paper work is involved in a police officer’s job
6. Many times, their job requires them to neglect their family
7. The dangers of going after criminals are immense
8. They are not allowed to use their weapons at all times in case of need
9. They are always looked down upon by the public
10. People abuse them without any reason
11. On most days, they only get about 3-4 hours of sleep
12. They are not paid well
13. Politicians tend to misuse junior police personnel. more
Helpful Surakshit Bharat Jul 23
Viewed by 2805
View all 67 comments Below 67 comments

Charudatta Sahaje
Apart from the suggestions listed above, I suggest that the work of Police department should be bifurcated into on-field and back office with rotation between these 2 groups every 3 years. To be more specific, there should be separate staff for office related work and separate for bandobast and other Police activities. more
Aug 15
View 67 more comment(s)
Post a Comment