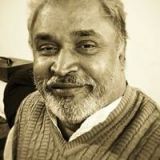 Dadagiri of RPF - forget other forms of corruption

Just now (12th march - 1900 hrs approx)i had gone to H. Nizamuddin stock yard, to release a consignment sent by my friend. i had just 1100 in my pocket and due to my own delay, i had to pay rs 1085 as demurrage, after paying railways i just had rs 15 left. the loaders were reluctantly understanding when i told them i couldnt pay them their loading, usually rs 100 to load into my vehicle. the loader said, "koi baat nahi sir, if and when u remember dedena, nahi to aapka duwayen kafi hai". the fun started now, the RPF checkpost officer took the gate pass and asked me, is that all? i realised he is asking for money. i explained him my position for not paying up. he wanted me to get either the porter or the railway babu to assure him his "dues". i had to swear on my head i did nt have any money.

i realized reversal of positions: it he who is to plead, and here i am, a customer, pleading with him to let me go. i still cannot understand why he was asking for "gate pass". for letting me go? for not creating any problems?

i am no smuggler, a senior citizen, going about doing what all other do. why shud i pay a ruffian railway cop any money?

i have many times seen railway cops collecting money from passengers from general compartments.

when will this stop? these are criminals in uniform, worse than terrorists, eating at the vitals of the nation.

i am filled with rage. will someone reply? more
Helpful Make Railways Better Mar 12
Viewed by 14667
View all 275 comments Below 275 comments

Prasad Cvsv
dadagiri of RPF should be condemned they are appointed to serve the passengers. they should change their attitude otherwise they should face severe problems from public more
Mar 30

Virendra Dodeja
Its only we r responsible because of understanding and priority as well study and grownup atmosphere is totally different ,hence we the actual face ,because of not value own money, own country ,our neibhour,and at last get government had to do all ;nothing is left for all of us check yourself minimum possible before us more
Mar 29

Kuldeep Singh (Engineer)
This whole incident was at night around 10:00 pm. more
Mar 28

Kuldeep Singh (Engineer)
Once I saw that some policemen who were without any uniform checking the luggage of a family (by look middle class) at Jamnagar railway station. When the husband objected , they threatened to put him behind the bars without any reason. The gentleman passenger asked them that if they want to check the luggage of wife then they should call a lady Constable otherwise he will complaint to higher authorities. The policemen who was senior (as per look) started abusing the gentleman in Gujarati but at the same time realised that matter may go out of control so left the family which had one child in lap and one child of about 3-4 years in age. Shame to such police, I don't know why to harass common man which has nothing wrong. How dare they can be on duty without uniform! !! How dare they check the luggage of any lady !!! Mr . minister, please do something to control for Jamnagar RPF/GRP staff. more
Mar 28

Satyendra Srivastava
Somewhere, we are also responsible for this system, by quietly paying up bribe to these corrupt goons. We don't want to waste our time in complaining and escalating to higher officials. more
Mar 27
View 275 more comment(s)
Post a Comment