Ok so # BeefBan in Maharashtra.
beacuse it hurts my religious
sentiment. But my religious
seentiments gets hurt only when Indians eat, I have no problem when people from Russian, China and Arab Countries will eat it.
Hence I have only banned it in Maharashtra, and however will continue to export to Middle east, China, Russia etc etc.
India one of the largest beef exporting country, one of the biggest U-turn taken by BJP government

They have campaigned Pink revolution (end of beef export) before lok sabha election. However in just 9 months India's beef export has grown by sound 16%. So I will continue to export it, because it generates revenue and it did not hurt my religious sentiment as it is eaten by non-Indians.
Beef exports grown up by 16%.

Whenever animals gets slaughteted,
its skin goes to a Leather factory.
But people who are demanding this ban should stop wearing Leather shoes, belts, purse.
In places where people can't kill healthy animals, they injure them, their legs or even poision them, not for Burger King but for Leather.
And also in new budget excise duty has been reduced on leather items, so you can wear more leathers.

There are 6 major suppliers of Beef in
India.

Out of 6 owner, only two eats beef and 4 are; Just read the owners name.

Can they stop exporting it to overseas???
Imposing ban Govt is killing several birds in one shot 1) Boost export of beef which I presume 2) hurt the economy of muslims since local supplies were majorly handled by muslims.
3) Its playing with the sentiments of hindus that the Govt is protecting the religious belief which is/was never the case. The ban should have been all over India why only in Maharashtra so it proves it has nothing to do with religion. Boosting exports is the major concern. NIGAHE KAHIPAR NISHANA KAHIPAR'.

But the fact has been ignored that by doing so the farmers who have been rearing the cattle will suffer tremendously since they will not get the price as per its actual value. The exporters will determine their very low price. The poor farmers will have no choice than to sell it at cheaper rates. But will have its impact in the longrun since it wont be feasible anymore for the cattle breeding.
BUT am actually confused what should I actually belief....are we living in a secular and democratic country?? Whenever there is a change in the Govt there is a drastic change in the policy?? WHY???? more
Helpful Transforming India Mar 06
Viewed by 26

Ramanand Naik
Food wastage is a cause very dear to me. There are millions of people in India who do not get a single proper meal and there is so much wastage due to improper storage and distribution. I think the prev. Govt. and its ministers could only fill their pockets but the Modi govt. Must publicise and act to improve storage on Priority unlike the ministers in prev . Govtn like Sharad. Pawar who were helpless and self fulfilling. more
Mar 06 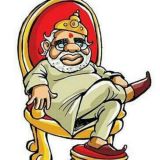 VIVEK GARG
you can run from here But from Public debate , where you will run ...I think only for People of my religion ...When Owaisi can do for muslims , Mayawati can do politics only for Dalits , So its also my choice according to Ambedkar's written constitution more
Mar 06

VIVEK GARG
Jacob Sahab I conveyed to you what i have to tell to you ...Now you waste your energy to delete my messages and reporting them so its your choice ... I will make thousand emails and will come back on this platform and you will do for another 1000 times and I will make your time unworthy. more
Mar 06

Staju Jacob (Professor and Author)
We must stop the hypocrisy. I personally think that while beef eating might be unhealthy, this should not be forced down the throats of people as is being done in Maharashtra. more
Mar 06
Post a Comment