1. Bringing home Indian nationals: On Sunday, an Air India flight was able to fly out carrying 129 passengers from Kabul to Delhi, but since then, the chaos at Kabul’s Hamid Karzai International Airport has meant commercial flights are unable to ply, and for the moment Kabul airspace has been closed. With thousands of desperate Afghans seeking to leave the country, the tarmac has been overrun by people blocking the airplanes from taking off or landing. According to sources, India is hoping to use its military C-17s to bring back diplomats, security personnel and the remaining Indian nationals from Kabul, but this is contingent on the road to Kabul airport, manned by Taliban, access into the airport, which is being secured by the U.S.-led NATO forces, and permission to land flights. According to officials, this remains the government’s first priority.

2. Helping Afghans who want to leave: Hundreds of Afghan nationals, many of them allied to the previous Ghani government are seeking to leave the country, and have applied for visas from the Indian Embassy in Kabul. Among them are those with links to India, who have studied or trained here, or with families in India, or those who could face reprisal attacks from Taliban militia. While the MEA has made a statement on its commitment to facilitate members of the Hindu and Sikh minorities in Afghanistan, no stated policy has been announced on whether it will welcome all Afghans, as India has done on previous occasions. If the government does accept them, then arrangements for what could be thousands of refugees will need to be made.

3. Recognising the Taliban regime: Last week after talks comprising 12 countries including India, U.N. representatives and Afghan representatives with the Taliban in Doha, a nine-point statement issued made it clear that they will “not recognise any government in Afghanistan that is imposed through the use of military force”. Given the situation, where President Ghani left the country, Afghan National Defence and Security Forces put up no resistance and Taliban fighters walked into Kabul, took control of the Presidential Palace without any bloodshed, the question now is whether these countries, which include India, U.S., U.K., China, Pakistan, Turkey, Uzbekistan, Tajikistan, Turkmenistan, Germany, Norway, and Qatar, will consider recognition to the Taliban regime. The decision is particularly difficult for India, which was closely allied to the Afghan government, and helped build democratic and constitutional processes there, and sees the treatment of women and minorities as integral to those processes. Recognising a Taliban regime, giving it global legitimacy will be a difficult step for India. Other questions the government will face are at the U.N. — India is President of the U.N. Security Council this month, and must take decisions on whether to convene meetings on Afghanistan’s future, including possible sanctions, and is also chairing the committee on Taliban sanctions.

4. Dealing with the Taliban regime: Regardless of whether or not India recognises the Taliban as the legitimate ruler in Afghanistan, the government will have to open channels of communication to engage the Taliban. In the past few months, security officials and diplomats have made initial, furtive contact with the Taliban in Doha, and the MEA said it is engaging “various stakeholders” in Afghanistan. Those links will have to be broadened in order to ensure the safety of Indians and the Embassy in Kabul to start with, but also logistical requirements, like using Afghan airspace, transit trade, humanitarian assistance etc in the future. Government officials have often said that they would not like a repeat of the situation during the IC-814 hijacking, when India had no ability to contact the Taliban at all.

5. Strategic choices with Afghanistan: The larger questions that the government faces are about how its strategic options in Afghanistan will change given the Taliban’s proximity to Pakistan’s establishment, and the concerns that anti-India terror groups could occupy space in Afghanistan to carry out terror attacks against India. India’s influence with the new government is likely to be considerably curtailed, as Pakistan’s influence over the Taliban remains strong, and the government will have to reconsider whether to now engage Pakistan directly as well. Other strategic issues involving future connectivity, which India had sought to do via Chabahar port in Iran, must also be considered in the longer term. more 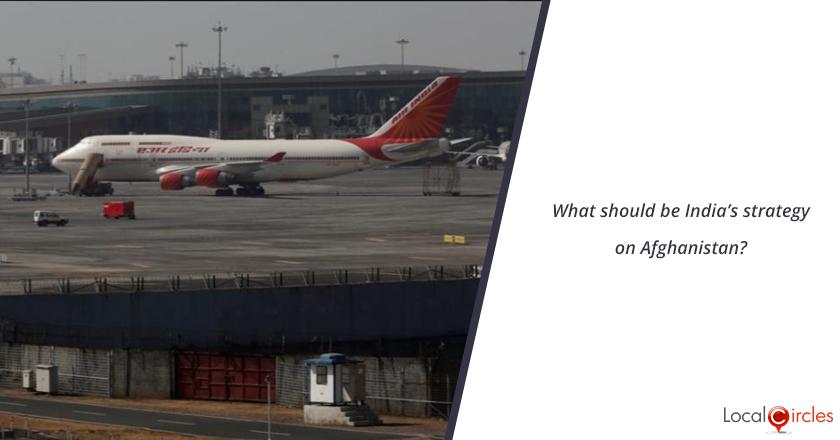 What should be India’s strategy on Afghanistan?
Participate in Poll.
Helpful Surakshit Bharat Aug 16
Viewed by 1530
View all 15 comments Below 15 comments

Csn Sarma
India need to stop dumping of Separatists Terrorists and their Supporters in the event of Present hailing from Afghanistan. Citizenship Articles 5 to 10 aught to be followed Strictly in allowing shelter . This is most important for Safety and Security of India and Indians . more
Aug 18

Csn Sarma
India need to stop dumping of Separatists Terrorists and their Supporters in the event of Present hailing from Afghanistan. Citizenship Articles 5 to 10 aught to be followed Strictly in allowing shelter . This is most important for Safety and Security of India and Indians . more
Aug 18

Anonymous Circle Member
We must face the reality without depending on any one country e.g USA which let down the people of Afghanistan who were unfortunately led by a corrupt system and useless Army. more
Aug 17

Susheel Paul
The capitulation by the elected government in Afghanistan to Taliban's (a mask for ISIS and ISI) power does not bode well for our Bharat. More so that both Pakistan and China have promptly given recognition to Taliban control of this nation. There have been statements from anti-Bharat radical Islamist in Pakistan that the entire region will now become 'HINDU-KUSH' ;which is the Pashto word for slaughter of Hindus. We are likely to be now completely surrounded by enemies for no fault of ours. It is time that we stand as a nation again and with the help of our allies face this reality bravely. more
Aug 17

Deenaz Bulsara
Accept the Taliban and resort to violence. That is what they are about. We are a non-violent country and we should abstain from interfering in other countries if it does not affect us directly. As Mr. Nair has said keep our border security all over the country very tight. Build the great wall of India to keep out these intruders. All the corporate parties should participate in this endeavour. more
Aug 17

Csn Sarma
Taliban is well supported by PAK and America's drawing back of Military Force from Afghan given strength to Talibans. Only USA and UNO to conclude on International Interest more
Aug 17
View 15 more comment(s)
Post a Comment