Glad that the circles are actually discussing the subject of variant Coronavirus. Based on what I have been reading about growth in cases, one has to believe its B.1.1.7 thats the lead sars-cov2 variant in India now, regardless of what authorities say or dont say.

The B.1.1.7 variant, which was first identified in the U.K., is between 30% to 100% more deadly than previous strains, likely around 64%, according to a new study published in the British Medical Journal 2 weeks ago.

Governments should consider additional measures to reduce deaths from the variant and plan for hospital capacity, the study authors wrote.

“Death from COVID-19 is still a rare event, but the B.1.1.7 variant raises the risk. Coupled with its ability to spread rapidly, this makes B.1.1.7 a threat that should be taken seriously,” Robert Challen, the lead author and a researcher at the University of Exeter, said in a statement.

Epidemiologists from the University of Exeter and the University of Bristol compared the deaths rates among people infected with the variant and those infected with other strains. They found that the B.1.1.7 variant led to 227 deaths among nearly 55,000 patients, compared with 141 deaths among patients who had previous strains. The researchers matched the groups based on age, sex, ethnicity and location to eliminate as many variables as possible.


The difference represents an increase in deaths from 2.5 to 4.1 per 1,000 cases, they wrote. More people who would have been considered low-risk previously were hospitalized with the B.1.1.7 variant, they found. more 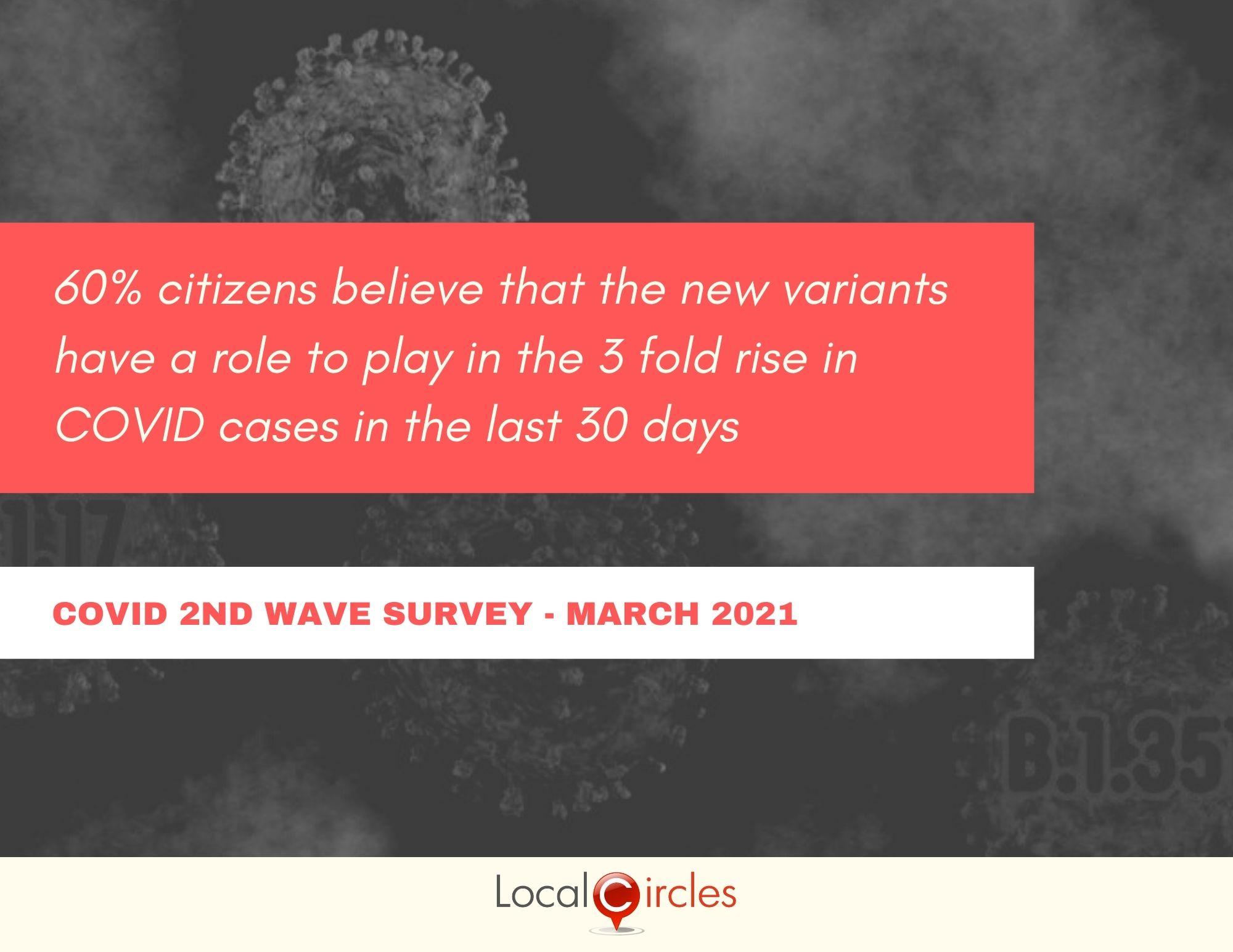 52% citizens feel risk of COVID variants driving a strong 2nd wave is real
Once again, our survey findings prove how the views and collective knowledge outweighs what might be the opinion of one institution or media in general. At a time when the Government was claiming that India has just 400 cases of COVID variants, our survey indicated that 60% citizens believe the variants are causing the surge.60% citizens believe variants behind the strong second wave of COVID Well with Punjab CM announcing that 81% cases in the state are of the UK VAriant B.1.1.7, it indicates that lack of genome testing and relaxed restrictions on flights have brought us to where we are. Do share this latest report link with your whatsapp, social media and other contacts so they comply with what is outlined in the report i.e. COVID norms, healthy living and shoring up finances. Do share any inputs you have!
Helpful Transforming India Mar 29
Viewed by 2178
View all 6 comments Below 6 comments

Gopabandhu Mohapatra
Let the public follow the guidelines issued by the government and continue to be alert in their day to day life. more
Apr 01

Deenaz Bulsara
The variants may infect more people very fast and rapidly but they are not fatal to that extent. People need to take precautions but they are just not bothered. There are scores of people who come into our building without masks making us seniors vulnerable and alas the police do not do anything about it. When the authorities keep saying they will implement, they are just repeating words and no action is really taken except for a bribe! more
Mar 30

Umesh Kumar
Have faith in our experts. Lot of misinformation on social media about variants causing surge in India. Usual precautions protect us, no matter what variant. more
Mar 30

Csn Sarma (socialworker)
Pursuant to GOI Order States if Mask is neglected, imposed (1) 500 Fine (2) if argued 1 Month Jail extendable to 2 Years for Arrogants. Some are resorting to Partial Lockdown or 144 Section. * Strictly maintaine Mask Distancing to Save Self OR Associates OR Co-beings EVEN FROM NOW . more
Mar 30

Govind Bindiganavale
How can we say that variants are responsible for more covid cases? It should be left to the experts to decide and take the required actions. Essentially, the prevention is in the hands of people by adhering strictly to the covid protocols. more
Mar 30
View 6 more comment(s)
Post a Comment