Prasad or prasad is a material substance of vegetarian food that is a religious offering in both Hinduism and Sikhism. It is normally consumed by worshippers after worship .
It is the spiritual offerings to God. Prasad is made for “God”.

SO FEEDING “GOD” IS ACTUALLY FEEDING “EVERYBODY”. NO IDOL WOULD EAT THE FOOD, BUT PEOPLE WILL. It is for their belief that a presenting food in front of the idol is done.

Prasad are mild and sweet and less spicy. Because “everyone” also consists of children, and old people. Gods also love less spicy food.

The authority of cooking prasada for big festivals or big temples, is always given to the priest's family. The chief priests, highly trained in cooking Satvik Food (non spicy, non-ginger-garlic-onion, non oily, vegetarian meal), are given the responsibility for cooking for masses. Since they have a fear of God, they make sure the food is extremely hygienic. Thus in the temple kitchens, you will often find people covering their noses and mouth to prevent saliva transfer. They would wash rice and herbs and vegetables several times, they wouldn’t pick up food which fell on ground. They will keep the spice content as mild as possible. Only fresh ingredients are used.

It is therefore also advised to commoners, to offer their first meal to God. Some families even today follow this tradition. They offer some morsels of food to fire, and only then they would taste their food. Those who follow this “divine” tradition of prasadam, they rarely fall sick. They would be eating healthy food everyday.

Also this tradition ensures that people, despite of their disbelief in God, can always feel secure at a temple. You never know who is going through a hard time. Maybe your offerings to “God” satisfy him in one of his human forms, who might be needing your help. This is a humanitarian system, a beautiful way of co-existing.
And when you do that, you end up achieving blessings….

WHAT A RICH PHILOSOPHY THE HINDUISM HAS .
Should that not be maintained to rest the total responsibility of the safety of PRASAD TO THE AUTHORITY OF COOKING PRASADA FOR BIG FESTIVALS OR BIG TEMPLES, IS ALWAYS GIVEN TO THE PRIEST'S FAMILY.

We can avoid such deaths , and illness as devotees PREPARE OUTSIDE THE TEMPLE KITCHEN TO BE SERVED IN THE HOLY PLACE. Earlier pesticide poisoning was added to the Prasad and 60 people died in Chamarajanagar as you open the attachment., near Mysore more 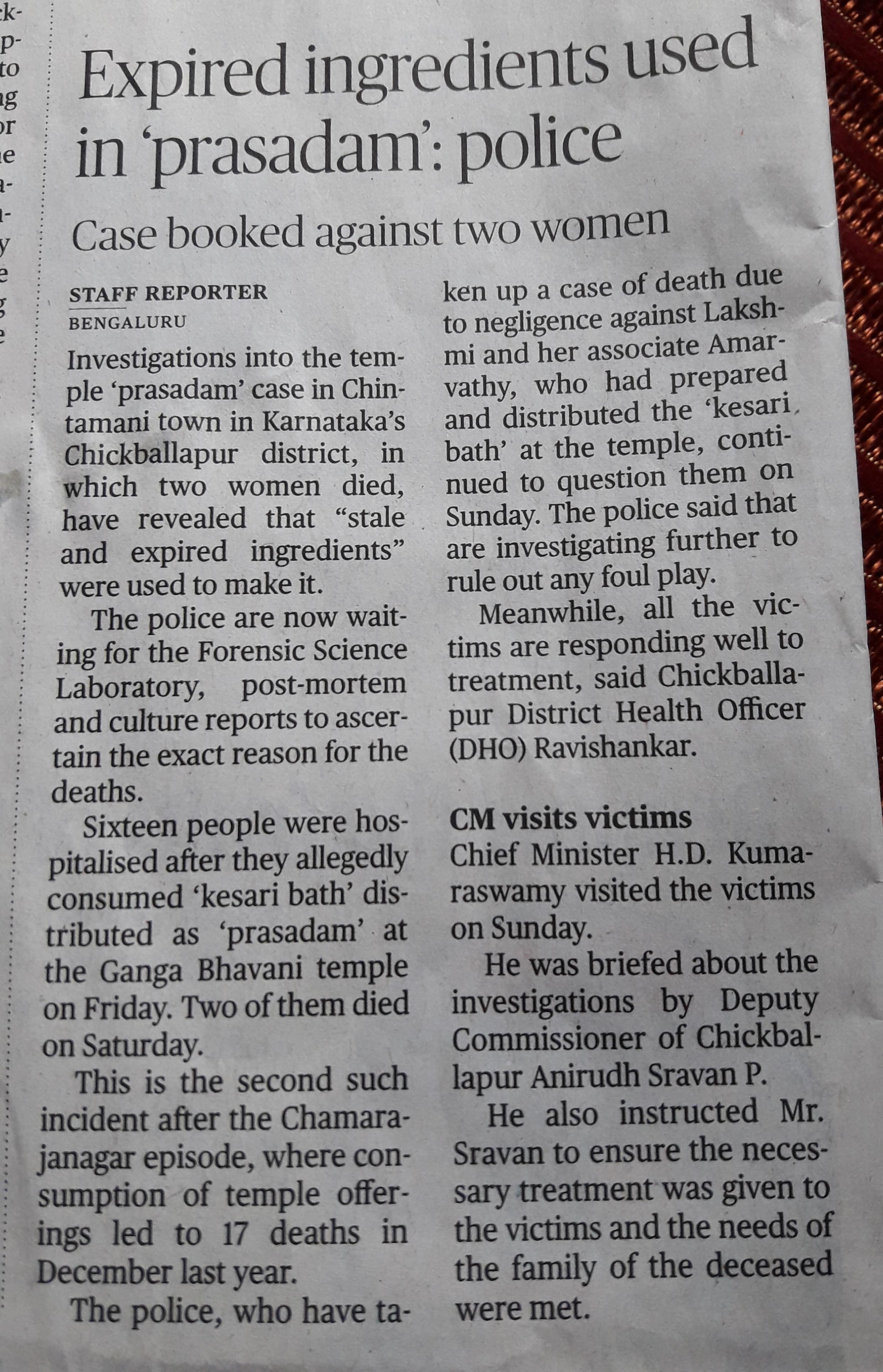 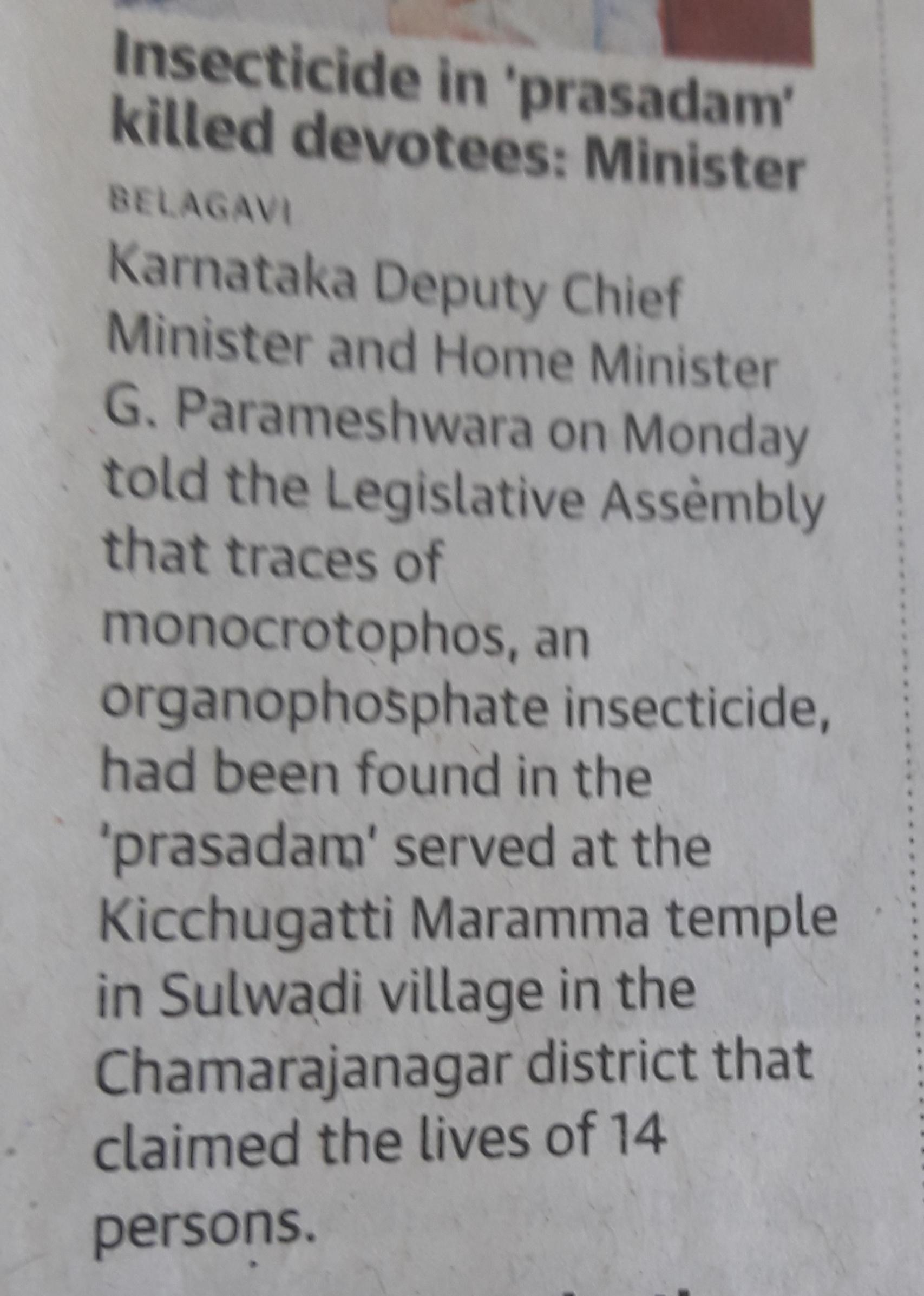 Krishna Kumar Goswami
Some measures must be taken regarding Prasadam so that people could get a pure and healthy Prasad. more
Feb 19

Prabhakarrao Yerragunta
The food served in temples as Prasadam is not being offered to the deity,but gets cooked only in the premises,hence strict laws should apply to the cooking conditions, ingredients ,serving conditions , cooks and the water used.
It must be banned if found to be cooked in unhygienic conditions by local municipal authorities and cases must be booked against them.Religion does not hold any authority.
Many temples are making a business out of this .
There is no need to serve food in temples on festival days in large numbers like Anna daanam.This is the reason for chances of food poisoning. more
Feb 12

AA JOSE
An excellent naration indeed. Offerings to God, whether it is named as "prasad" or any other term, are there in almost all religions and it is not confined to hindu religion only. However, the issue here is as to how to ensure that eatable items, including fruits offered in all such places are highly hygenic and totally fit for human consumption, so that there may not any scope for endangering human lives as had happened in the incidents reported in the media. One should not look such issues from the narrow angle of attack of a particular religious tradition, but one must appreciate any lose of human life is a perennial loss to the entire human society and no right thinking person can endorse the same in the name of or consequence of a religious tradition. Irrespective of the religious place or institution, whoever serving or offering such prasad or food items to the people must be held strictly liable and responsible for ensuring quality of the same too. more
Feb 03

Jayakumar Daniel
The last sentence of your post says exactly what I meant to say . thank you.

' IRRESPECTIVE OF THE RELIGIOUS PLACE OR INSTITUTION, WHOEVER SERVING OR OFFERING SUCH PRASAD OR FOOD ITEMS TO THE PEOPLE MUST BE HELD STRICTLY LIABLE AND RESPONSIBLE FOR ENSURING QUALITY OF THE SAME TOO. ' more
Feb 03

Deenaz Bulsara
I also agree with Mr. Maddala's sayings. India has been saved because of a few people with integrity. Today, our police have failed in their work, it will take a common man weeks to get a simple problem solved by the police whilst the perpetuator of crimes gets away; the municipal corporations have failed miserably. Due to greed they have allowed mass buildings to come up with the help of the government of course and this has led to over population in cities which are bursting at their seams. Today, in Pune one cannot walk on the streets without being injured as there are very few footpaths and traffic is so congested and people drive so rashly. more
Feb 03