RESPONSE FROM CONSUMER AFFAIRS MINISTRY BANG ON THE HEAD :

We the Consumers have shown our concern about the increase in dependence on Chinese Imports and Smuggling through porous borders . The past 4 /5 years we have all expressed the various type of products that have been Creeping into the Indian Markets officially as well as Stealthily . The words of the Minister has really come as ‘ Manna from Heaven ’ for all those opposing the Chinese products that has nearly stifled our MSM Industries and the innovations of Indians .

The Minister also has said that there will be new rules and standards by BIS to control the sub standard Chines products that flood India . China has gone to the extent of even exporting Lord Ganesa and Diwali Lights to India , making our Entrepreneurs Complacent & helpless . What about even Kites , Toys , Wide Range of Electronic items . We hopefully expect our Entrepreneurs to work just a bit hard initially with able support from GOI to replace these Imports through Make in India products .

The whole operations will not be Smooth as there will be quite a few Black Sheep and Profiteers and Smugglers within India with nexus from Nepal .

* BUT THE KKEY IS WITH US THE CONSUMER TO AVOID BUYING GOODS FROM CHINA THOUGH CHEAP AND COLOURFUL,
* GOI SHHOULD FULLY SUPPORT THE INDIGENOUS PRODUCTION SO THAT WE DON’T DEPEND EVEN ON A PIN FROM CHINA ,
* BIS SHOULD BE ALERT AND AWAKE TO ENFORCE STANDARDS ON THE CHINESE GOODS,
* BE VIGILANT AT THE POROUS INDO NEPALESE BORDER WHICH SERVES AS A CONDUIT FOR CHINESE SMUGGLED GOODS,
* FINALLY BE ALERT PARTICULARLY ON THE CHINESE PRODUCTS THAT BEAR INDIAAN MANUFACTURED LABELS OR CHANNELED THROUGH SOME OTHER NATION .
- Jai Hind more 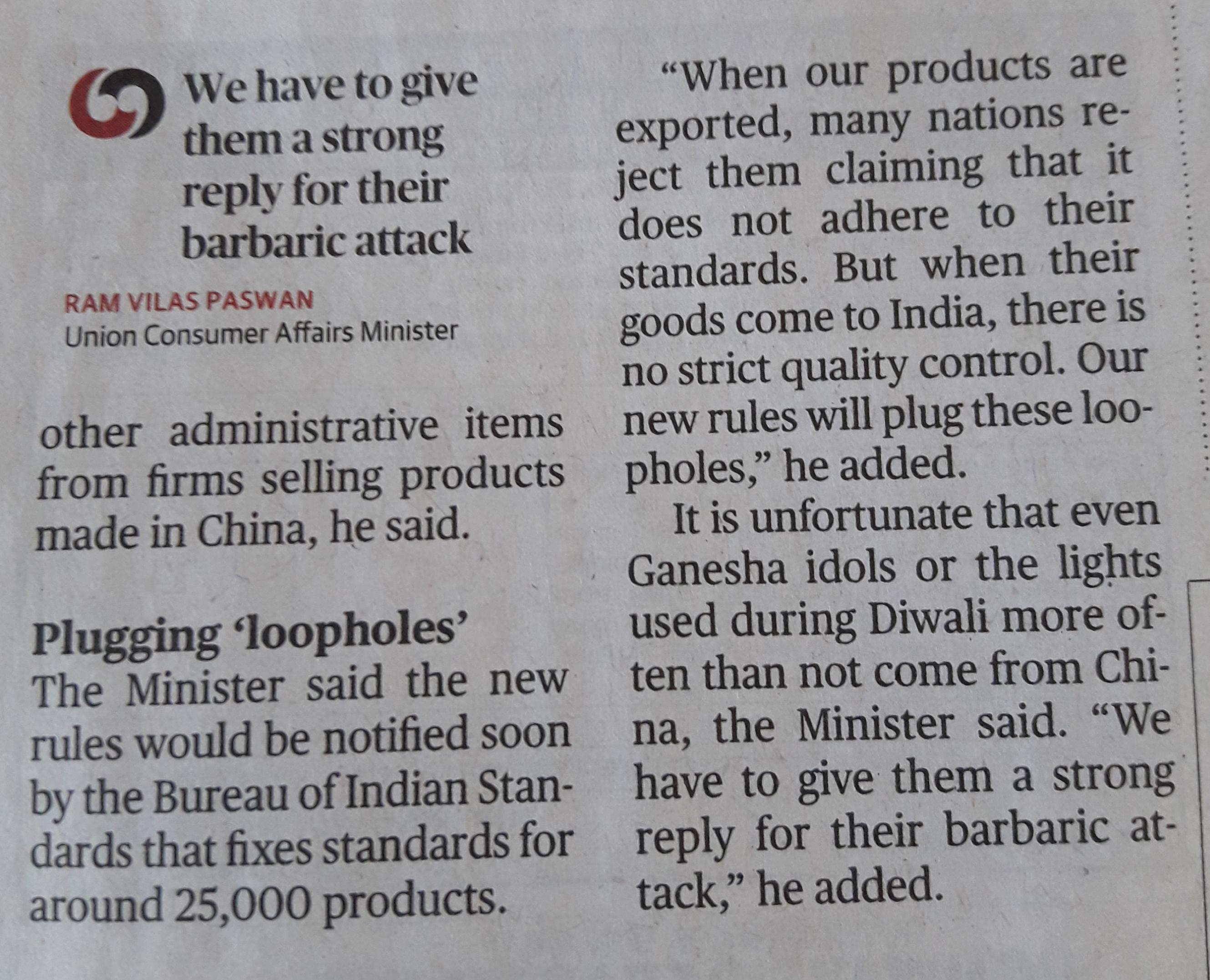 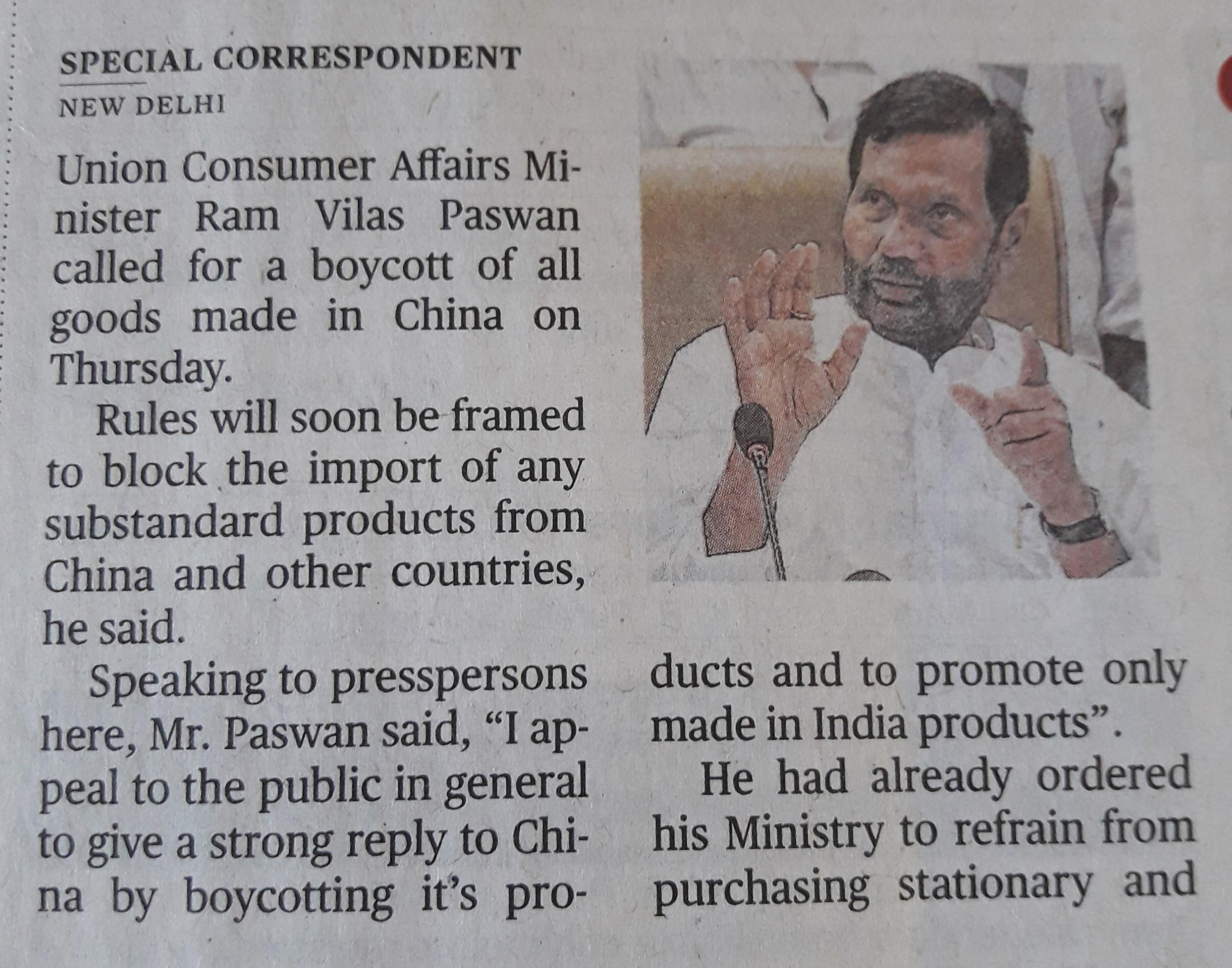 Anonymous Circle Member
Go to Amazon country specific sites and pick an item. then click the seller.. the location address of seller is displayed in full meaning the item is from that region of the country.. now come to amazonindia..which has inbuilt link for India only items.. ( no real socks actually... why?.)...click any item of any department ...then click the seller...no location address seen ?.. why .. ?... do indians have no preference for country of manufacture of the items bought?... govt must ensure that any eretailer in india (foreign/Indian) must display the main label page of the product packet among the various angled photographs of items seen otherwise....optimize the shipping rates for goods bought online from western eretailers too ... more
Jul 02

Jayakumar Daniel ( Tour advisor for tourists from U.S.A and Europe .QualifiedYoga instructor )
I am not a lawyer, but may be able to give the available avenues . National Anti-profiteering Authority starts consumer helpline to file GST profiteering complaints - The Economic Times  All the guidelines are available here . https://m.economictimes.com/news/economy/policy/national-anti-profiteering-authority-starts-consumer-helpline-to-file-gst-profiteering-complaints/articleshow/65562863.cms  . You must have all documents relating to the payments and descriptions for payments . The dates . You can even create a resource post kn the circle and give details . Ic you seek help ,lawyers in the circle will offer help . All the best madam , I am also a senior citizen participating with my comments and ideas . more
Jun 30

Satya Pal Ratti
That "China has done this to us" is one way, perhaps the easier way of looking at it. The other one is: "What has the Indian industry been doing all these years....slumbering? China is not to blame here, it's our own indigenous industry and the government. more
Jun 30

DK Sarkar
I had written on several occassions in several platforms of this forum and for several years since that low-standard goods, whether electrical or non-electrical and whether electronics or non-electronic had overwhelmed the domestic market - small shops, footpath vendors, shopping mall or e-commerce. I had also requsted that all e-commerce markets need to UNAMBIGUOSLY declare the origin of the product in the product description and/or catalogue. Such inferior goods are often hazardous to handle, increase hazardous wastes which are non-biodegradable (thereby accelarating environmental degradation of our country) and starving our MSME sector. Thanks God, our cerebra seem to have received the stimula for vision. more
Jun 24

Deenaz Bulsara
Jayakumar, can you please help me in filing a case against anti profiteering of a hospital. Just tell me the way and I will go ahead. Many thanks. more
Jun 24
View 22 more comment(s)
Post a Comment