We are pleased to share with you that today the Rajya Sabha cleared the Consumer Protection Bill 2019, thereby paving the way for consumer protection reforms in the nation.

We are thankful to all members of our circles for regularly participating in various discussions and polls and giving feedback on the bill.

Attached is a copy of the bill for your reference. We will undertake further discussions as we move from formation of a law to its implementation.

Please continue to share your inputs on how to strengthen Consumer Protection in India. more 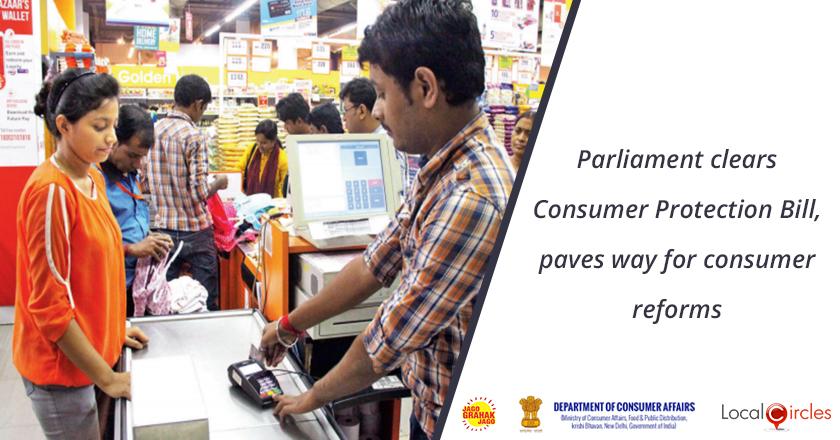 G. C. Mathur (Convenor-Trustee, Binty (A Voluntary Consumer Organisation), New Delhi)
There are about 63274 members in this LC, if am not wrong. It will be appreciated if the DoCA GoI could get such issues circulated among all the 63274 members for better response. Right now the responses appear to be more from the flatterers. We need "critical comments".

I think I have raised a very pertinent point of securing the rights of consumers through the activities of CPCs without any political or bureaucratic connotations. more
Aug 23

I need more of the views and comments of the consumer-participants here of their understanding of the Consumer Protection Act past and present. We must not have a blind faith in any legislation of the GoI which largely depends on the political authoritative than helping the consumers. more
Aug 24

Csn Sarma
Many are barring mails. BUT LC POSTS SHALL HAVE DIRECT ACCESS for better resolutions. I second Sri GC Mathur . more
Aug 23

G. C. Mathur (Convenor-Trustee, Binty (A Voluntary Consumer Organisation), New Delhi)
My suggestion is that we should discussion clause by clause, starting with the Definitions given in the Act. It appears to me that the definition of the word "Consumer" has been almost diluted, from what it used to be in CPA 1986. I shall feel obliged if the participants here liberally put in our view points, first for our discussion and then to take up with the Government for necessary changes, if required. Second, we would be giving a feedback not a complaint, keeping in mind that the Councils are the "parliaments of consumers where they will be non-political, non-commercial, and non religious" and their recommendations must be mandatory without any connotations of political and bureaucratic hints.

I shall be taking up the issue of Consumer Protection Councils as provided in Chapter II, Sections 3 to 9. It is provided in Section 3.(1)(2) that The Central Council shall be an advisory council and consist of the following ..................

While discussing this part of the Act, we must know that billions of consumers' personal money is at stake which has got to be managed by the Members of the CPCs at the Centre, States and Districts. Responsibility for managing these Funds in CWF has got to be in the hands of the CPCs members, not the Parliament or any of the Finance Bill/Act.

Mind it, I am talking of the "PERSONAL MONEY OF CONSUMERS THAT HAS BEEN RECOVERED BY THE REGULATORS AS OVERCHARGED TAXES ON SALES, INCLUDING THE 'GST', AND IN THE STATES BY THE CONCERNED HEADS OF THE DEPARTMENT OF TRADE AND TAXES; MONEY LYING UNCLAIMED AND UN-REFUNDED WITH THE BANKS, THE INSURANCE COMPANIES, DEPARTMENT OF POSTS' BANK AND INSURANCE, INVESTORS' MONEY, ET AL. This is not any revenue of the government nor they governments can use it at their whims and fancy.

Here, another issue is of "Unjust Enrichment" of the Government and undue exploitation of the political leadership for diversion under Consolidated Fund of India, The Finance Act of 2019 (Chapter VII), National Anti-profiteering Authority under GST Act, etc.

I the widest section of voluntary consumer organisations of India could come forward for a discussion and debate.

D Joardar
Great news. Another steps towards empowerment of consumers. More awareness is required amongst consumers. Should be encouraged to spend cash bare minimum. more
Aug 13

VAITHEESWARAN SANKARANARAYANAN
Hope the consumer protection bill is well knitted to have win win situation for both. We will come to experience once the same effectively implemented. Prior to this, everyone is made aware the provisions of the bill by awareness campaigns among the citizens at every corner of the nation. more
Aug 10

Bishan Basu
Having enormous problems with Amazon. Where to complain? Thanks Basu more
Aug 08
View 30 more comment(s)
Post a Comment