I was amused reading a recent statement of the Chief Executive Officer, Noida Authority after the Twin Towers was brought down. "If there is a violation then definitely its responsibility will be fixed, if not today then tomorrow. Everybody should abide by all the norms fixed by the government and by the court," she reportedly said.
This statement reveals an unwillingness to accept responsibility or learn, and to outsource blame on external factors. Proof of this is evident in the orders of the Supreme Court and the Allahabad High Court in the Supertech case which have been authenticated in full measure in the CAG Report.

It is evident that the problems in Noida lie at the door of the Authority and its officials, especially those at the top. There is no doubt that the Supertech Multi Storey would not have become such a huge problem had the officials of the Authority lived up their responsibilities.

The bench of Justices D Y Chandrachud and M R Shah, which heard the case said " You are reeking with corruption from eyes, nose and on the face of it." The Judges pointed out that “The record of this case is replete with instances which highlight collusion between the Noida Authority with the appellant and its management.

“The case has revealed nefarious complicity of the planning Authority… Noida made no effort to ensure compliance of the UP Apartment Act 2010. This cannot point to any collusion other than collusion between Noida and the appellate.” The Court accused the Authority of ” sanctioning a flawed construction proposal, refusing to disclose the building plans and not launching an investigation even after violations were reported.”

This is not the only such case. A similar case of alleged illegality stands on Plot No 46C in Sector 34, a multi story structure built, again by Supertech, on a plot which was reserved for Nilgiri 11 colony. As in the Twin Tower case it is alleged that rules were bent to accommodate the builders. Officers of the Authority are well aware of the illegalities in this project
Read Full Story:https://noidasmartcity.blogspot.com/2022/09/noidayou-are-reeking-with-corruptionsc.html more 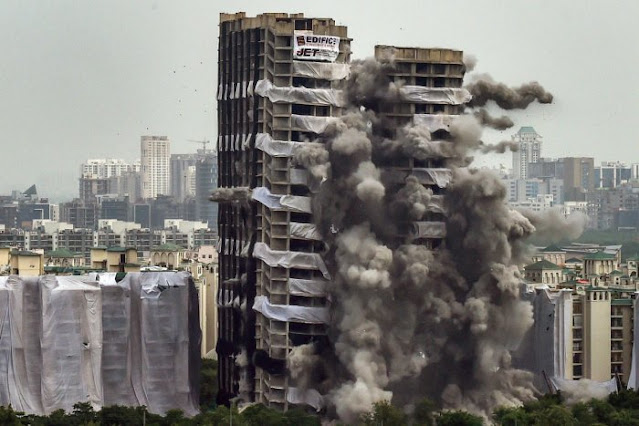 Prithvi Nath Bhargava
Apparently corruption in Noida authority is not limited to one or two Departments, but almost in all other department too. For an example Horticulture Department is responsible for maintaining parks, road sides trees etc. For the said purpose lacs of Rupees are spent for their maintenance through contractors. They are generally hand in gloves with Noida staff/officers and neglect the job assigned to them with full impunity despite complaints to the authorities. An area known as TIKONA park and a community centre in Sector 99 of Noida are shining examples of open corruption/inefficiency. more
Sep 23

ASHOK MITTAL (Residents of Noida)
You are 100 percent correct, authorities are saying to others and not to themselves. more
Sep 23

S C JAIN
It is true that this would not have been possible but for the connivance of officials but much if the responsibility lies with concurrent political leader by whose whims and fancies system was working. They go Scot free putting the onus on burocrats and babus and no one neither the Government not the Hon'ble courts fix up responsibilities to that level. more
Sep 22

Anonymous Circle Member
The most unfortunate part is the authorities to check the irregularities get in tune with the perpetrators for their petty gains. Leading to the community/ stake holders/ poor customers in jeopardy. The nation must start fixing the responsibility on the then officials to recover the losses. It’s high time we start from small scale like commercial complexes built up on main roads with no parking infrastructure. We must start acting in an organised manner. more
Sep 22
Post a Comment