Smoke-billowing vehicles, unauthorised industrial units, garbage burning and construction & demolition dust continue to throttle people's lungs there. Here's what was seen at some of these hotspots.

The air in this posh South Delhi locality is foul owing to vehicular emissions. The residential area falls between the busy Ring Road and the Outer Ring Road. These roads have limited space for widening and bear a daily load of 8 lakh vehicles.

"Huge traffic jams during peak hours lead to pollution. As a preventive measure, we have carried out plantations along the roads," said RK Puram AAP MLA Parmila Tokas.

Due to poor public transport systems, locals are forced to use their own vehicles but road infrastructure is not adequate to take the pressure. Stretches such as Pankha Road, Mahavir Enclave, Som Vihar and Dabri are always choked. "Many traffic signals don't work and cops can hardly be seen," said Sharmila Bhaumik, a resident.

Locals said vacant plots are being used to dump garbage, which is regularly burnt. There are many industrial units that also contribute to pollution.

Residents said industries are emitting smoke, triggering a rise in respiratory illnesses. A large number of commercial vehicles come to factories which causes traffic congestion and pollution. There is a constant foul smell coming from the landfill site in Okhla which makes it difficult to live in the area.

A large number of scrap dealers burn plastics. Since the area borders Haryana, the action is hardly taken due to state jurisdiction issues.

There are many hot-mix plants that generate dust and toxic gasses. "No measures like sprinkling water on roads or mechanised sweeping are done. How will pollution levels come down?" asked Kavita Bishnoi, a resident.

Anand Vihar is sandwiched between two industrial areas --Sahibabad in Uttar Pradesh and Patparganj in East Delhi. Hundreds of factories release toxic fumes. A huge quantity of plastic and solid waste can be seen burning as authorities look the other way.

Close to 4,500 buses use Anand Vihar Terminal. Many of them are polluting and come from neighbouring states where regulations aren't as strict. "You cannot live in Anand Vihar without covering your nose," said Sushmita Sinha, a local.

The air is foul. Plastic waste is being burnt after every midnight, despite curbs imposed by anti-pollution agencies. Piles of solid waste are common sights. There is only one way of disposal -- set them on fire.

Manoj Kumar, a local, said even electric wires are burnt to extract copper. "Bags full of waste are kept on roads. Some of it is sent for recycling, the rest is burnt. Factories also lead to pollution. I have lodged several complaints, but to no avail," said Pawan Kumar Sharma, AAP MLA from Adarsh Nagar.

Industries and traffic jams are major culprits here too. Most roads are narrow, potholed and congested.

These Outer Delhi areas are quite old and highly populated. There is no space for road widening.

Raja Aggarwal
1. india needs a Population Control Law in a speedy manner.
2. Other authorities need to work in tandem with EPCA. EPCA alone cannot fight this menace.
3. Bawana And Narela did get a good network of roads. Inside these areas roads are good. Transit roads which take traffic in and out are in a mess. The villagers demanded original roads built adjacent to water canal be shut and traffic made to pass through villages so that they can run shops and earn. The authorities buckled under pressure when locals resorted to crime on newly built but poorly guarded roads leading to traffic jams.
4. Industrialisation cannot be blamed in Narela and Bawana as they are planned Industrial areas. roads are good and wide in these areas. people from all over Delhi run factories there under a Relocation scheme leaving many main residential colonies free of industrial clutters. Let us not blame a point which is not to be blamed. Okhla and Jahangirpuri too are planned industrial areas. Trouble is when industries operate at Places where it is not authorized. more
Nov 15

Dr. Neelam Nath
Illegal constructions,floors added without fear of any authority.
Authorities were aware about it during past 30 years & did not take any action.
People got bolder & added more as if it was an infectious disease.
Our kids have to pay the price while responsible people as authorities are trying to take action,but lots of opponents to pull them down.
People huddled together in illegal units are unhappy lot due to death & Disease,caused by their own Care a Damn Attitude of putting structures on spaces which were accessible to them. more
Nov 14

O.P. SACHDEVA
In R.K.Puram,the ROOT CAUSE is endless,bold spread of tehbazari shops on pavements of main road from Som Vihar to sector 1 crossing,connecting roads linking to Outer Ring Road,slums along the ‘Ganda Nallah’.This malignant spread is continuing.DDA & CPWD,the land-owning agencies in this CPWD residential colony as also the SDMC,who grant tehbazari permits,withe police in hibernation are answerable.Does the Minister,MUD,GOI care? Administration is obviously being run at the very low level,one can see that.One can not but suspect CORRUPTION for the all through inaction for letting degradation accelerate in the past 5 years.Slow moving heavy traffic flow due to encroachments of the all shoulders of road contributes.Dust removal& amelioration are absent.Filth abounds. more
Nov 13

RANJIT NANDA
Absolutely correct. This area has permitted large scale unplanned development and massive encroachments on the roads. Its also becoming a hot bed for local mafia and unemployed youth entering the criminal world. All this has been 'Allowed" to happen. more
Nov 15 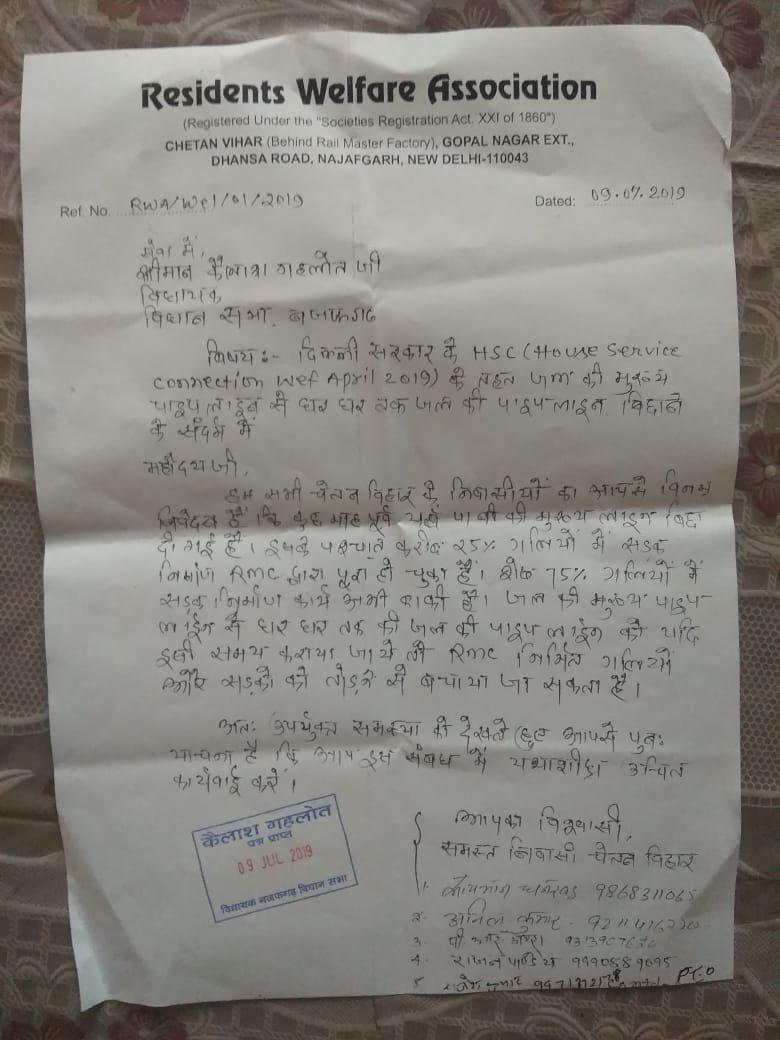 Totally failed and let us down with tall promises of transformation
Whole governance is out of control and Babus are still working at their own will.
Politicians are as usual doing favoritism to their near and dear ones.
Projects are being carried out with exorbitant Budgets in traditional ways without any Coordination and supervision
Roads are dug, constructed and again drilled sheerly due to non accountablity of Babus.
All public Greivances on pgms.delhi.gov.in, email, Twitter handles are just going Disposed, forwarded without any closure.
Twitterhandles are just for propagating and creating hype in minds of people. more
Nov 13