Whereas the flora (flowers, plants, trees and grass etc) of the District Park presents an extremely likeable sight these days, it's the fauna (animals) which is a source of worry.

Years ago, voices were raised against the dog menace. Later, the monkeys invaded the park.

During the past few years the bats have found their domicile in the Park. Initially, their number was low and they occupied the trees inside the lake only. Since recently, however, their number has grown multifold and they have extended their domicile on several trees under which the walkers walk. Black bat-shit spots cover the road under those trees.

If steps are not taken fast to remedy the situation the District Park will become Desolate Park. This Park is meant for human beings, not for animals.

This topic has been raised on this platform earlier too. Local Circles is kindly requested to escalate and raise it to a higher level and induce the responsible departments to undertake quick action.

Ashish Rai (9670 SECTOR C Pocket 9, Vasant...)
Shocking statement calling fauna scary! There is something called symbiosis. Cross-fertilisation happens between flora and fauna that allows them to coexist and thrive. Natural pollination, for example, happens with the help of these fauna. Limited intelligence of men makes them pass judgement over the rest. By the way, bat droppings are called guano, that is fertiliser. If at all, see that the you do your bit in conserving the environment. more
Jun 22 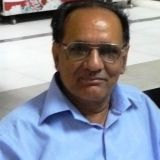 Bimal Kumar Srivastava
If your concern is about the District Park, Haus Khas, where the dog menace / Monkey menace and the bat menace is well known problem, then I fully support your efforts. more
Jun 20