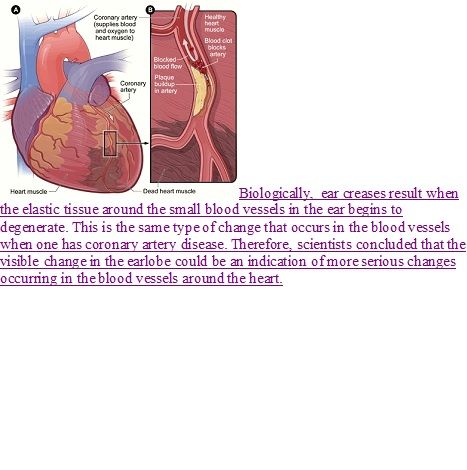 Raja Chandra
Thank you all for appreciating my post. Best Regards. more
Oct 02

Dr.(Mrs.)Chandra Kanta Gosain
It is a controversial issue more
Oct 01

Raja Chandra
Thanks to you all for appreciating my post. Best Regards. more
Oct 01

Raja Chandra
Can Earlobe Creases Be a Sign of Heart Disease....?? Could that small vertical mark on your ear have something to do with heart disease? Here is a simple test that could protect you from serious damage to your health. In 1973, a doctor named Sanders T. Frank conducted a number of studies to determine whether an earlobe crease, known as "Frank's sign", could be an indicator of coronary artery disease. He found that patients who had creases running at an angle from the bottom of their ear opening to the edge of their ear lobe were at higher risk for heart disease. But before you start worrying, here are some basic statistics and background on the test. Since Dr. Frank's studies were published, more scientists have looked into the correlation between the earlobe crease and heart disease. Researchers found that the earlobe crease "may identify a subset of patients prone to early aging and to the early development of coronary artery disease, whose prognosis might be improved by early preventative measures." Others like Dr. Sarah Samaan clarify that, "Heart disease doesn't cause earlobe creases, nor do the creases cause heart disease, but they seem to be a marker for an unhealthy lifestyle." Biologically, ear creases result when the elastic tissue around the small blood vessels in the ear begins to degenerate. This is the same type of change that occurs in the blood vessels when one has coronary artery disease. Therefore, scientists concluded that the visible change in the earlobe could be an indication of more serious changes occurring in the blood vessels around the heart. To provide you with some numbers, a more recent study in 2006 found the predictive value of the ear crease to be about 80 percent in individuals 40 years and younger. That said, it appears that ear creases can predict certain aging diseases like heart disease and possibly even diabetes, but there are still some scientists that are unconvinced. One study conducted in 1980 found that there was no significant relationship between earlobe creases and coronary artery disease in American Indians, suggesting that "Frank's sign" may not have the same level of indication in other ethnic groups. Another study on Japanese Americans also found no correlation between earlobe creases and heart disease. Yet other scientists propose that because the studies are usually conducted on patients over the age of 50, the results may be biased as individuals naturally have a higher risk for these diseases as they age. It could be that earlobe creases are simply a sign of the natural aging process. Despite these doubts, most scientists and doctors agree that the appearance of an ear crease at the age of 50 and below could be a good indication that the body is not as healthy as it should be. For this reason, if you have an earlobe crease, or know someone with one, it is important to consult a doctor who can test your blood and determine if this odd indicator holds any truth. And remember, heart disease can be treated and even stopped in its tracks, and once it has disappeared, so too will the earlobe crease! more
Oct 01
Post a Comment