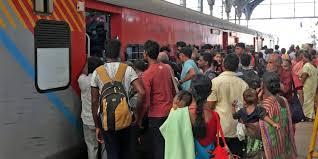 By Haradhan Chel
Till date the condition of railway is like BSNL is 90 s. If common people can not afford aeroplane, their only option is railway. But getting reservation in any route is beyond the reach of common man. Almost in all Indian railway routes, it is difficult to get a reserved ticket within 1 month. Travelling in train with RAC or W/L ticket is very common in present days. Railway has taken a lot of initiative to make fare Tatkal booking but never become successful to provide ticket to the passengers without paying some money to the agents. Railway is much serious about only the cleanliness whereas the main moto for transportation of common man is overlooked always.
I find problem in railway policy. Why don't Indian Rail allows private companies/FDI to run their own train on rail routes. Railway may allow tracks like airport authority where private players run their plane by paying rent for accessing airport. The train fare can be guided by a Govt authority like private bus fares are controlled by RTO. It is not possible to serve 130 crores of people by only one govt organization. Indian Rail should pay immediate attention in this matter.
Residents of West BengalNov 01
1 Online Signatures
Viewed by 20