Fight Aganist Pollution at the Source 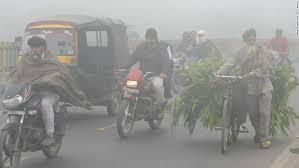 By Vijay Kalia
The efforts to fight pollution are not complete unless we fight the same at the point of its source. The Air Quality of Delhi is dirtiest and the most polluted over the years without much being done to stop the same at the source on war footing manner. We need appeal against stubble burning, solar and clean energy generation to help flora and fauna survive, strict regulation on construction and building activities and waste management by utilizing the same in generation of power. The waste principally plastic being usable in road works. An appeal to states, farmers societies to use waste crop for alternative use as one such use has been made in making environment friendly plates and even fit as eatables after some cleaning process by a qualified IIT professional.
So join the movement to fight it at the source than fight after its spread.
The Petition was also marked to:

Zakir Hassan
People are burning garbage & plastic bag & wire in all industrial areas that should also ban.
Plz also suggest any complaint no or email ID where anybody can complain without showing his identity.
Regards more

Vijay Kalia
Yes true. Currently Central Pollution Control Board monitors the air quality and announces the measures but a lot more is required with lot more measuring instruments monitoring the quality. The deterrent punishment can work better which is only advisory. more
Nov 29

Challa Babu
The question of air quality and pollution was deliberated in many conferences and the resolutions given to the government for action. But the understanding of the government is so poor that they wake up only after they are in neck deep water. Today in Delhi you cannot do anything about air pollution because the amount of dust in the air is so high that nothing can be done by individuals. The PM 2.5 is a special case, which can be dealt with using electric vehicles and zero carbon emition norms. Which takes time. But cleaning the roads and making it dust free can be done using machines for cleaning. Many times the nalas are cleaned and the garbage is put on the roads, which dries and gets into the air. This is the callous attitude of the local municipal corporations. As individuals we can only see that our vehicles donot pollute. Beyond that it is the duty of the government to talk to the environmental specialists and do the needful irrespective of the cost. The burning of the fields in Punjab is a case where the government should have made available the machines for the purpose as the farmers said that they donot have the money. So it is the government which has to wake up the problems more
Nov 22

Vijay Kalia
Your concerns are very true. It should be an election issue of 2019. more
Nov 29