December 2, 2020, New Delhi: LocalCircles received thousands of complaints last year from consumers about their bitter experience with app-based taxi aggregators in India. One of the issues many of the of consumers highlighted was they being charged 5-10 times the total fare by aggregators upon cancellation of rides during rains in Hyderabad or Ganesh Festival in Mumbai. The LocalCircles survey published on September 5, 2019, was the first to highlight “capping the surge in pricing” and “driver ride cancellations'' as top issues consumers face with the cab aggregators. Per more than 50,000 responses from consumers, LocalCircles published the poll result and also escalated the matter to draw the attention of top bureaucrats and the Minister of Road Transport & Highways, Nitin Gadkari on the issue. The Government had assured LocalCircles that the pulse of the consumers will be given the due weightage as they finalise India’s Motor Vehicle Aggregator guidelines under the Motor Vehicle Act 2019.

Subsequently, the Government on November 27, 2020, released “Motor Vehicle Aggregator Guidelines – 2020”. The guidelines covered most of the consumer asks submitted by LocalCircles, including the cap on “surge price” by cab aggregators in times of high demand to 1.5 times the base fare. Along with it, the notification stated that the aggregators can only charge 10% penalty of the total fare but not exceeding INR 100 upon cancellation of a booking by consumers without valid reason.

LocalCircles then conducted a survey to follow-up on citizens’ feedback to the changes made by the Central Government in the Motor Vehicle Aggregator Guidelines - 2020. The survey that collected responses from more than 16,000 consumers states that 81% approve of the 1.5X surge pricing cap and the clause of penalty of up to INR 100 if the driver cancels a ride. This is a high level of support shown by consumers on the Government’s Motor Vehicle Aggregator guidelines. 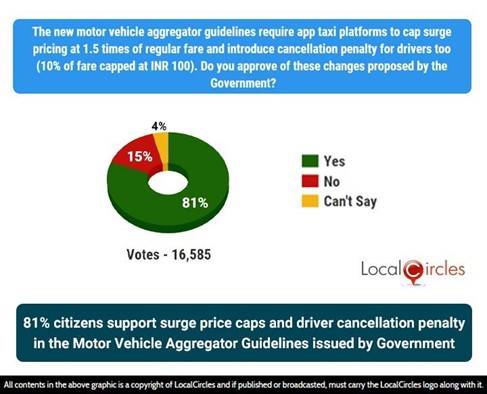 Also, many consumers discussed about this becoming a ground reality and urged the various State Governments across the country to operationalise these guidelines at the earliest.

LocalCircles is of the view that while compliance to these rules may mean some short term pain for motor vehicle aggregators like Ola and Uber, it will lead to significantly increased consumer trust in the medium to long run. These rules if implemented well will increase certainty of a timely ride for the consumer as well as predictability of fares.