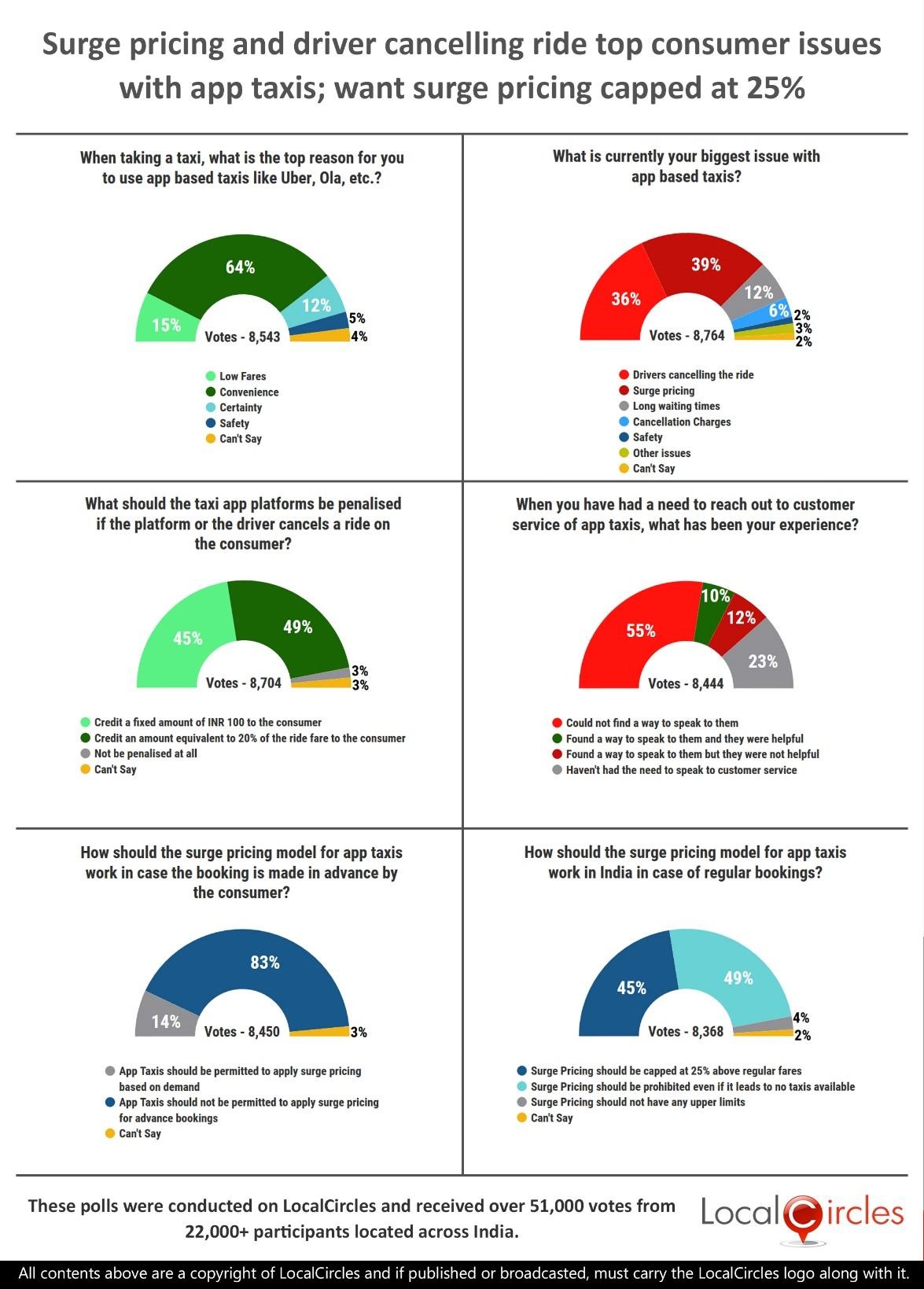 6th September 2019, New Delhi: App based taxi services, or online ‘aggregators’ as the Motor Vehicle (Amendment) Act 2019 calls them, have become an important part of the modern-day lifestyle. Till a few years back, the idea of calling a cab to your door steps with the push of a button on your mobile was nothing less than a dream, but companies like Uber and Ola have used technology to make the dream come true. But bundled with this convenience, comes many issues that the users have been facing while they use such services.

LocalCircles conducted a survey to check the consumer pulse on their experiences with using app-based taxis services in India. The survey received 51,000+ votes from across Indian cities. The first question asked citizens when taking a taxi, what is the top reason for them to use app-based taxis like Uber, Ola, etc. 64% chose convenience, 15% low fares, 12% said certainty and 5% said safety.

This clearly marks a shift from 2014-15 when low fares was the top reason for consumers to use app taxi and this shift is an indication of a maturity of a new service where people try for lower prices and then over time use it for convenience. 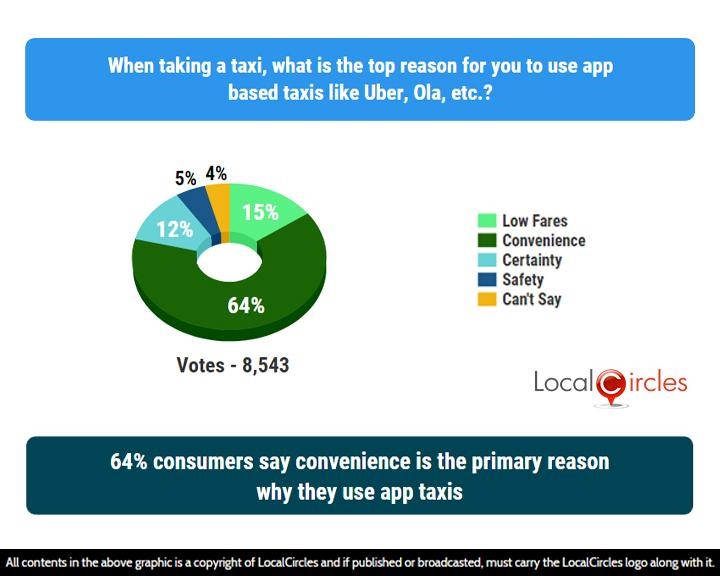 The next question asked consumers as to what is currently their biggest issue with app-based taxi services. Driver cancelling the ride and surge price came out to be the top issues, with 36% choosing the former and 29% choosing the latter. 12% said long waiting times was a big issue while 6% chose cancellation charges. 2% said they felt safety concerns and 3% had other issues. These top concerns also became evident in the discussions held on LocalCircles on the subject where hundreds of users indicated how drivers ask a user about the destination and then ask them to cancel the ride. In many cases, they stop taking the user’s phone call when they know the user wants to go to a destination they are not interested in travelling. This can be quite tricky for people, who are traveling in odd hours or have a flight or train to catch.

Surge Pricing is also a top consumer concern where consumers have experienced that in peak hours or when cab availability is poor, the taxi apps take undue advantage of the consumer and charge a heavy surge rate. 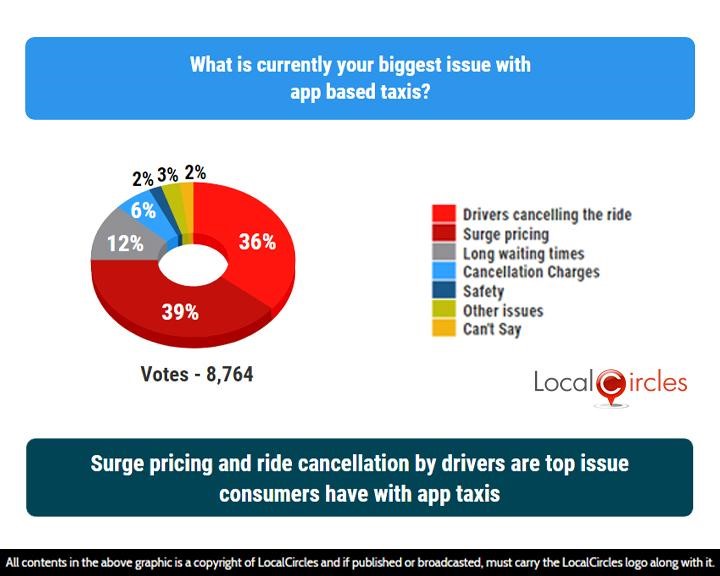 The Madhya Pradesh Government recently announced a set of regulations for app-based taxi services operating in the state, under which any app-based taxi which refuses or cancels a ride will have to pay a penalty of Rs. 1000 per refusal. It is said that this regulation will come into effect very soon.

The following question asked consumers, how the app-taxi platforms be penalised if the platform or the driver cancels a ride on the consumer. 45% said in such a case a fixed amount of Rs. 100 should be credited to the customers account, while 49% said an amount equivalent to 20% of the cancelled ride fare should be credited to the customer’s account. 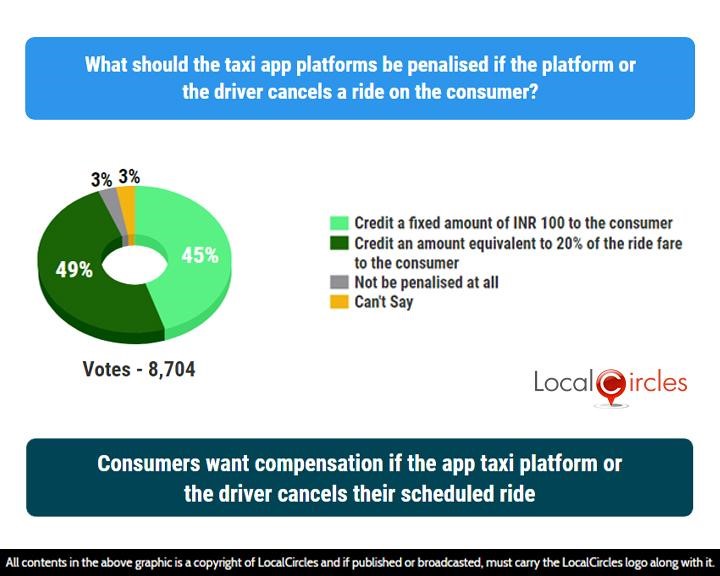 Consumers are clear that just like they are penalised for cancelling a ride, the driver as well as the app taxi platform must also have a disincentive if they cancel a ride.

Many consumers in the LocalCircles standards participation community with Bureau of Indian Standards have identified standardization of customer service processes and apps for app taxi platforms. 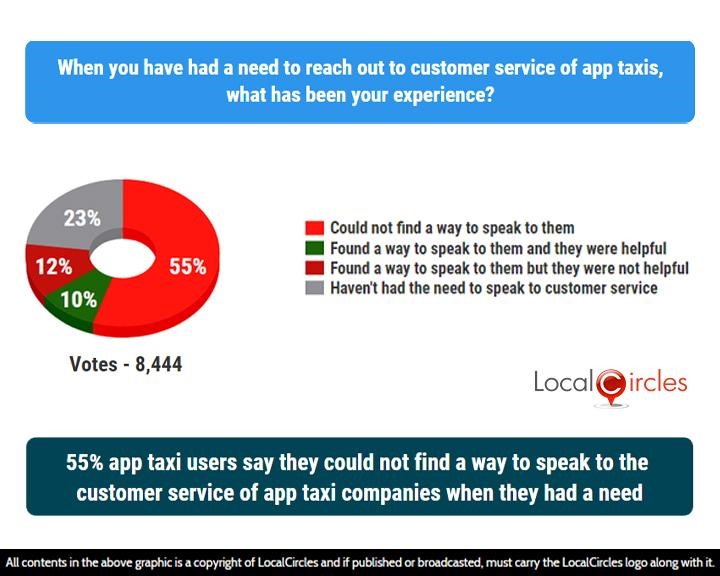 Some consumers in the last few months have raised concerns about app taxis charging surge pricing though the ride was scheduled well in advance. 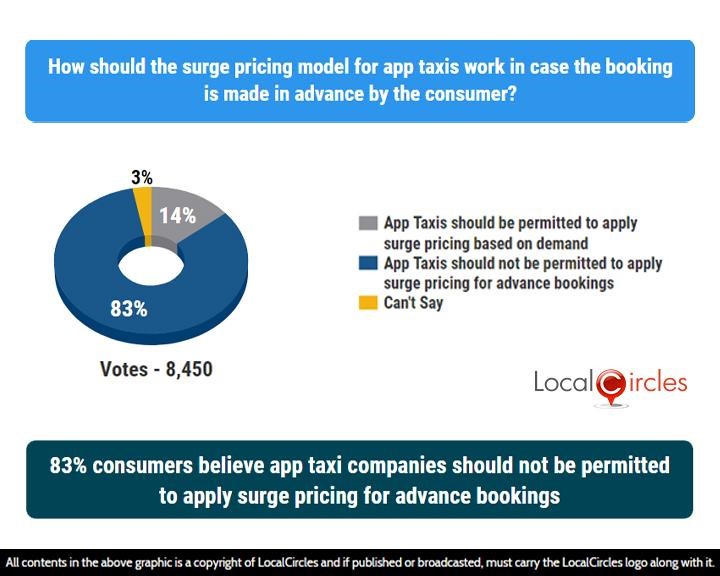 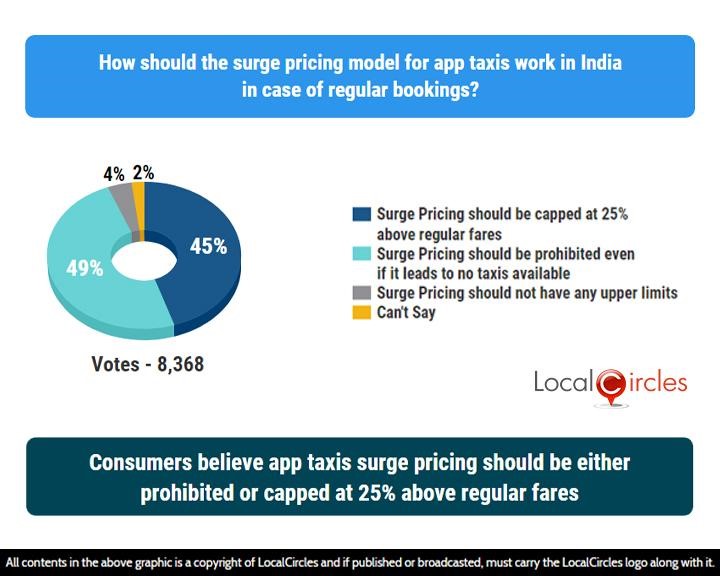 LocalCircles will be sharing a copy of this report with the various central and state government stakeholders so the consumer concerns are taken cognisance of and appropriate policy interventions are affected to address them.