As GST turns 4, 43% businesses give it a thumbs up, while 28% express dissatisfaction 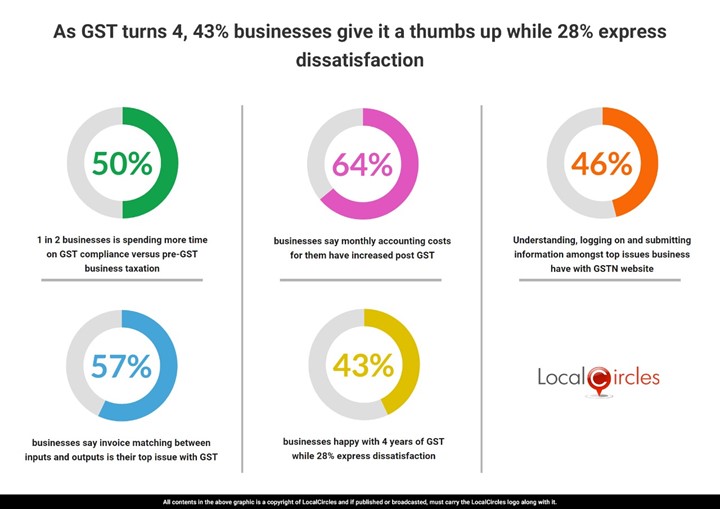 July 1, 2021, New Delhi: The Goods and Services Tax will complete 4 years of implementation on July 1st, 2021, which came into force on July 1, 2017. The comprehensive, multistage, destination-based Goods and Services Tax was implemented after 101st amendment of the Constitution of India by the Indian Government. It replaced multiple taxes, which were there levied by the Central and State Governments so that there would be ‘Transparency’ and ‘Ease in Tax Compliance’ than the pre-GST indirect tax structure that had a broad scope for tax evasion. The ‘single tax’ GST is applied all over India with a set-off provision for tax paid on inputs, keeping in mind both the burden of the businesses and inflation rates. It currently has four slabs of 5%, 12%, 18% and 28%.

As GST completes its 4-year mark, LocalCircles has gone back to Indian businesses to collect their responses to gauge its performance over the years. Since its implementation, it hasn’t been easy for smaller businesses to adapt to the new GST taxation. Businesses on the LocalCircles platform have been suggesting that they have been facing several issues to comply with provisions under GST. Taking cognizance of suggestions and inputs from businesses, LocalCircles has conducted a survey to highlight problems they’ve been facing in regards to GST compliance, and to check their pulse if the new taxation has been able to bring in transparency and ease in tax compliance in comparison to pre-GST era. This allows both the broader business community and the Government to understand where things stand and what needs to be worked upon that is of pivotal importance in the fundamental success of the Goods and Services Tax. The survey received close to 18,000 responses from businesses spread across 171 districts of India.

Before the implementation of GST, the filing of indirect tax returns by the taxpayers was independent of the supplier or buyer’s return, which was mostly done once a month or quarter. Under GST, businesses must upload invoices as well as make sure input credit claim is reconciled or else pay penalty. The first question asked citizens how much more time are they spending on GST compliance versus pre-GST business taxation. In response 28% said “same as before”, 31% said “marginally more”, and 19% said “significantly more”. Only 9% of businesses said they are spending “significantly less” time on GST compliance, while 13% did not have an opinion. The findings of the survey indicate that 1 in 2 businesses is spending more time on GST compliance versus pre-GST business taxation. This question in the survey received 3,103 responses. 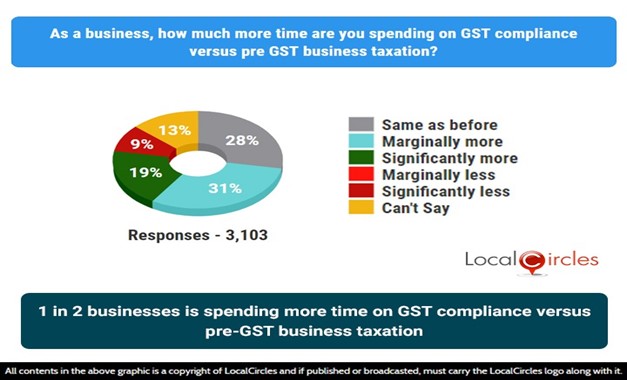 Under the GST regime, a business whose turnover during a financial year exceeds the prescribed limit of INR 2 crore must get its accounts audited. A business under GST has to maintain accounts like purchase, sales, stock, etc., aimed to bring clarity in many areas of business including accounting and book-keeping. The next question asked businesses by how much their monthly accounting costs increased post-GST as compared to the pre-GST era. In response, 36% of businesses said it has “increased by up to 25%”, 19% said it has “increased by 25-50%”, and 9% said it “increased by more than 50%”. There were also 36% of businesses who said that it is “still the same as pre-GST”. On an aggregate basis, 64% of businesses say their monthly accounting costs have increased post-GST. This question in the survey received 3,063 responses. 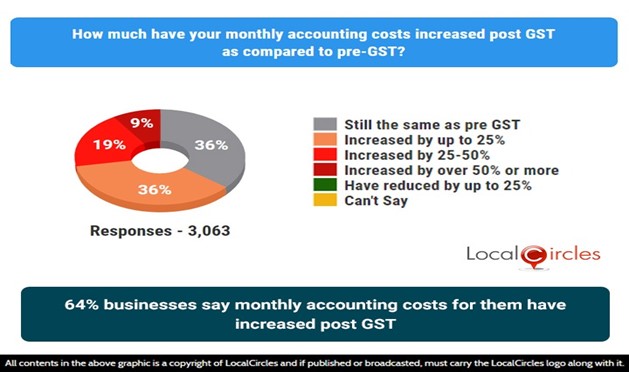 Understanding, logging on and submitting information amongst top issues business have with GSTN website

Over the years of implementation of GST, reports are rife where taxpayers have faced several technical failures, such as accessing the GSTN portal to file returns, understanding the filing process, etc. This has resulted in difficulties or delays for many businesses to file their returns. Several times, the Centre had to extend the due date for furnishing annual GST returns due to such technical glitches. The following question asked businesses their top difficulty faced by their business or company in filing GST returns. In response, 8% said they faced “connection issues with GSTN website”, and 17% said “logging and submitting information on GSTN website”. Breaking down the poll, 29% of businesses were “unable to understand GSTN website”, while 23% said they faced “other issues”. Further, 23% of businesses did not have an opinion. The findings indicate that “understanding”, “logging” and “submitting information” were amongst the top issues businesses have with the GSTN website. This question in the survey received 2,913 responses. 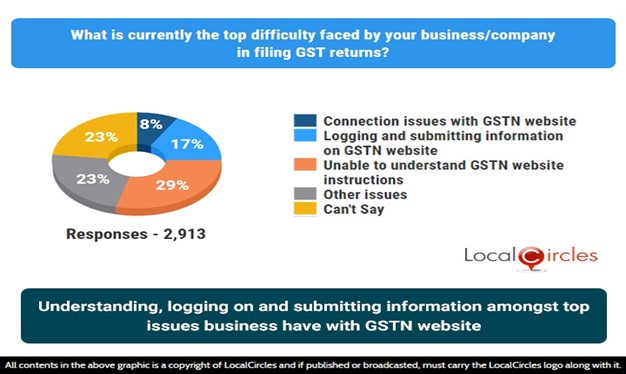 Technological glitches aren’t the only problem taxpayers have faced. When asked businesses about the current issues they are facing with GST, the majority of 57% of businesses said their top issue with GST is “matching invoice between outputs and inputs”. There were also 13% of businesses who have faced “delay in refunds”, another 13% have the issues to “separate registration needed for each state”, and 5% have the issue with “TCS and TDS”. 12% of businesses did not have an opinion. This question in the survey received 3,004 responses. Invoice matching is an area where when a business is tallying their output invoices and applying the due input tax credits. However, many businesses have raised the issue of dependency on suppliers here who if delay their GST compliance, it impacts the compliance of the entire supply chain. Many small businesses over the last four years have also raised the structural issue of having to pay GST for their customer invoices while the customers, in many cases large companies or Government bodies, take 3-6 months at times to pay invoices, thereby creating a cash crunch for the small business. 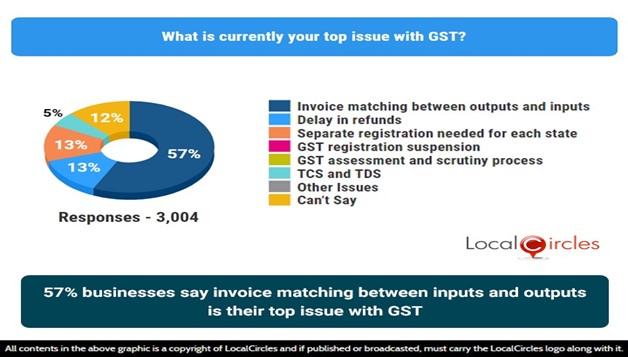 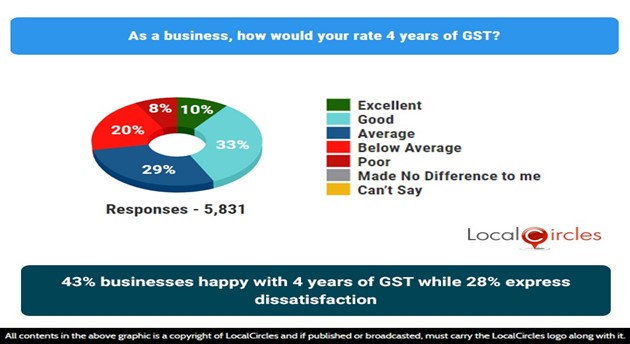 In summary, 43% of businesses surveyed are happy with 4 years of GST while 28% are dissatisfied. This is mainly because 1 in 2 businesses is spending more time on GST compliance versus pre-GST business taxation, and the majority are facing issues to understand, log-in, and submit information on the GSTN website. In comparison to pre-GST, 64% of businesses say their monthly accounting costs have increased post-GST. 57% of businesses also said invoice matching between inputs and outputs is their top issue with GST.

LocalCircles will share the results of the poll with the Ministry of Finance and the GST Council so that feedback of the businesses received can be given the due consideration.

The survey received close to 18,000 responses from businesses located in 171 districts of India. The survey was conducted via LocalCircles platform and all participants had to be registered with LocalCircles to participate in this survey.

As GST turns 4, 2 out of 3 citizens want changes to rate structure