As GST turns 4, 2 out of 3 citizens want changes to rate structure 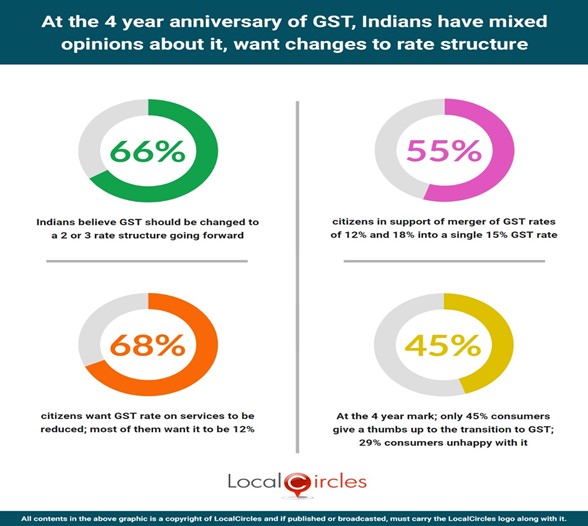 July 1, 2021, New Delhi: The plan to merge the two slabs under the Goods and Services Tax (GST)—12% and 18% slabs—has been pending since several months. In the aftermath of 4 years since the implementation of GST in 2017, several citizens on the LocalCircles platform has been suggesting the merger of these two slabs into a single GST rate. The recommendation to merge the two slabs was first suggested by the 15th Finance Commission. The merger will likely bring a standard GST rate between 12% and 18%, which means that products that currently fall under 12% such as mobile phones, air tickets, frozen meat will become expensive, while products such as furniture, TVs, household products will become cheaper. However, how the Government is going to tweak the current tier structure is something that will be known when the GST Council meeting presides. The Finance Ministry is of the opinion that the GST regime has stabilized for now after the COVID-19 induced pandemic and subsequent lockdowns, and also been able to nab the GST evaders as well, and will also simplify its process.

As GST completes its 4 years, LocalCircles has conducted a survey to understand citizens’ pulse on the 4 years of GST, the rate structure, merger of GST rates of 12% and 15% and their overall assessment of GST. The survey received more than 35,000 responses from citizens residing in 321 districts of India. 66% of the respondents were men while 34% were women.

The current GST rate comprises 4-tier tax structure: a zero rate or nil rate that exempts certain products from GST, a lower rate of 5%, a standard rate of 12% and 18%, and a higher rate of 28%. These GST rates were organized in such a way that all the necessary services and some food items are placed in the lowest bracket, and the other luxury goods, services and de-merit goods are placed in the highest bracket. Since a lot of citizens have been raising issues about simplification of GST over the last 4 years, the first question sought to understand citizens’ pulse on what should be the ideal tax rate structure going forward. In response, 11% said “single rate”, 22% said “two rate structure (all product and sin/luxury products)”, and 44% said “three rate structure (basic essentials, all others, sin/luxury products)”. Breaking down the poll, only 18% of citizens said it should remain same to the “current or four rate structure (basic essentials, all others split across two rates, sin/luxury products)”, and 5% did not have an opinion. On an aggregate basis, 66% of Indians believe GST should be changed to a 2 or 3 rate structure going forward. This question in the survey received 9,576 responses. 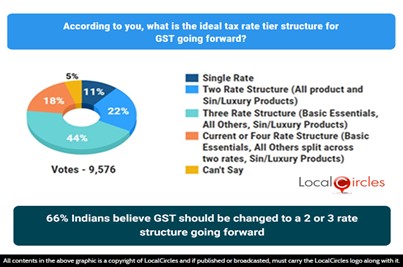 Many citizens have regularly raised the issue of 18% being too high a tax rate for most household goods like hair oil, toothpaste, shampoo, along with furniture, TVs, etc., along with services. Citizens have cited several examples of how individuals and the service providers all resist from transacting with invoices because of such a high tax rate on services. 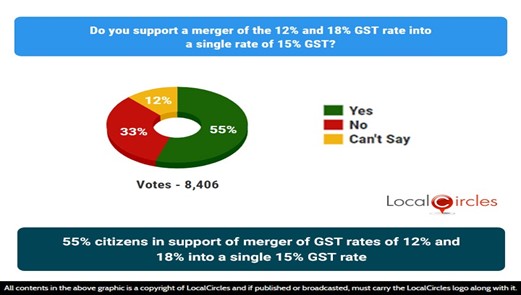 68% citizens want GST rate on services to be reduced; most want it to be 12%

Thousands of complaints have been received by LocalCircles since 2017 that most service providers refrain from giving an invoice for service. These range from vehicle repair to repair services at home. As a result, even when the service is deficient, it is difficult for the consumer to hold the service provider accountable. The third question in the survey asked citizens about what the Government should do with GST on services which is currently at 18%. In response, the majority of 52% of citizens said that the Government should reduce it to 12% GST rate, and 16% said it must be reduced to 15%. There were 18% of citizens who want it to be unchanged at 18%, whereas 3% wanted it be increased to 28% GST rate. 11% of citizens did not have an opinion. The findings of the survey indicate that 68% of citizens want GST rate on services to be reduced. Of whom, the majority want it to be at 12% GST rate. This question in the survey received 8,449 responses. 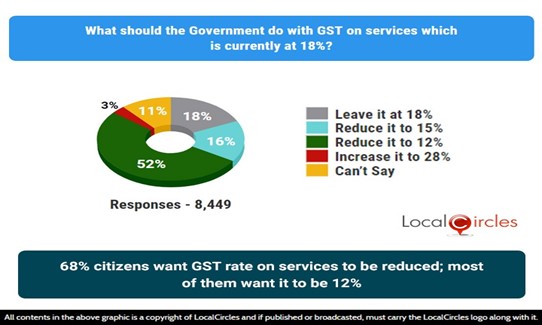 At the 4-year mark, only 45% citizens give thumbs up to the transition to GST; 29% unhappy with it

The GST was implemented in 2017 keeping in mind both the burden of the common citizen and inflation rates. The final question in the survey sought to know how as consumers’ would they rate the 4 years of GST in India. In response, 15% said “excellent”, 30% said “good”, and 16% said “average”. Breaking down the poll, 9% of consumers rate the 4 years of GST as “below average”, 20% said “poor”, and 7% said it made no difference to them, while 3% did not have an opinion. On an aggregate basis, only 45% of consumers gave thumbs up to the transition to GST, while 29% are unhappy with it. This question in the survey received 8,653 responses. 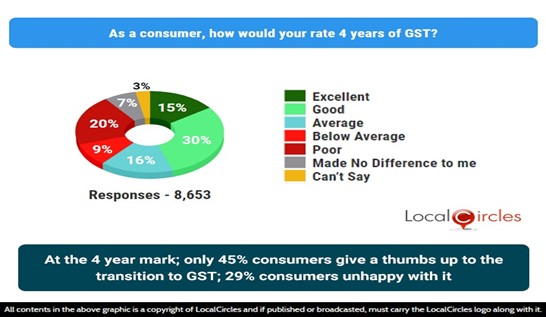 In summary, the findings of the poll suggest that 66% of Indians believe that GST should be changed to a 2 or 3 rate structure. Further, 55% citizens are in favour of the merger of GST rates of 12% and 18% into a single 15% GST rate. It is also clear via the survey that 68% of citizens want GST rate on services to be reduced. Of whom, the majority want it to be 12%. Overall, at the 4-year mark, 45% of citizens gave thumbs up to the transition to GST, while 29% consumers are unhappy with it.

LocalCircles will share the results of this citizen survey with the Ministry of Finance and the GST Council so that citizens’ feedback is given the due consideration as the Government evaluates way forward on GST.

35,000+ responses were received from citizens residing in 321 districts of India. 64% of the respondents were men while 36% were women. 43% of the respondents in the survey were located in tier 1 or metro districts, 29% in tier 2 districts while 28% were located in tier 3, 4 or rural districts. The survey was conducted via LocalCircles platform and all participants are validated citizens who had to be registered with LocalCircles to participate in this survey.

As GST turns 4, 43% businesses give it a thumbs up, while 28% express dissatisfaction