October 29, 2020, New Delhi: While the pandemic induced by the novel coronavirus continues to rage in Delhi crossing the 5000 daily case load mark, a double whammy has begun with the annual polluted air crisis also descending upon Delhi-NCR and taking air quality to toxic levels. It is usually the time of the year in Delhi-NCR when smoke or pollution in the air mixes with the fog – called smog – that engulfs the whole city with harmful air particles causing various pollution-related health hazards to humans. Medical experts worry over the likelihood of smog that might influence the coronavirus to linger in the air for some more time, indicating an imminent threat of infection to increase in these cities.

LocalCircles conducted a survey to understand how the ambitious plan that received Supreme Court’s nod in 2016 to tackle air pollution is being implemented across Delhi, Gurugram, Noida, Faridabad and Ghaziabad. The plan, GRAP or “Graded Response Action Plan” involves agencies – municipal corporations, traffic police, pollution control committee, transport department, police department, metro corporation, public works department, power plants – to undertake certain measures in their authority to control the amount of pollution released in the city’s air. It is a set of guidelines for state agencies to follow when the air quality index moves from “Moderate to Poor”, “Very Poor”, “Severe” to “Severe +” categories.

Air quality in these five cities has already started to hover at severe categories. The survey asked people living in 5 cities to respond if the GRAP guidelines are being followed in their respective areas. It also sought to get their perspective if they’re willing to avoid firecrackers during the Diwali celebrations this year. The survey received more than 20,000 responses from citizens living in Delhi, Gurugram, Noida, Faridabad and Ghaziabad.

The first question asked Delhi-NCR citizens to check whether agencies are in action to stop dust pollution at construction and demolition sites and RMC plants, stop the burning of garbage in landfills and other places, mechanized periodic sweeping and water sprinkling on traffic roads, ban on usage of diesel generators. Surprisingly, only 20%-25% citizens in these five cities said all the aforementioned GRAP guidelines are being followed in their respective areas. 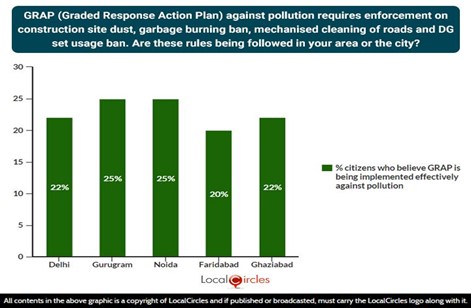 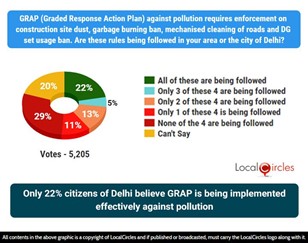 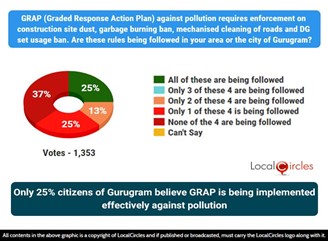 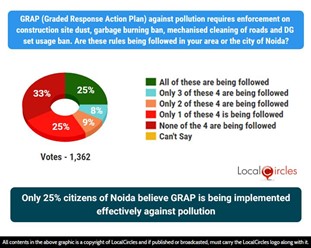 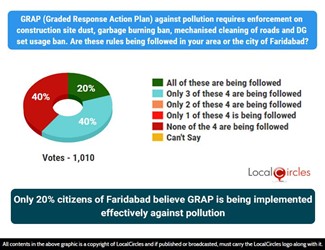 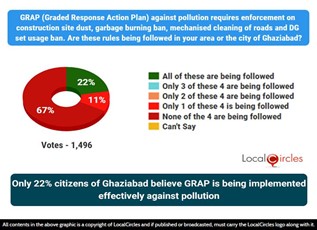 The second question in the survey tried to understand the general perception of people in these five cities on their willingness to avoid firecrackers during festival celebration by the NGT and the Government implementing a ban on sale of firecrackers. To the question that asked citizens, “Given that many areas of Delhi-NCR are already in hazardous air quality category or beyond, what should be done with sale of crackers?”, more than half of the respondents in Gurugram, Delhi and Faridabad voted for a “complete ban on sale of all crackers this festive season”. 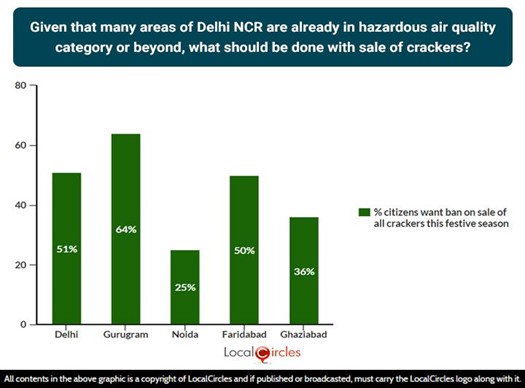 Aggregate view on Cracker Ban this Diwali: 79% residents of Delhi NCR want ban on sale of regular crackers; 32% of them support sale of green crackers 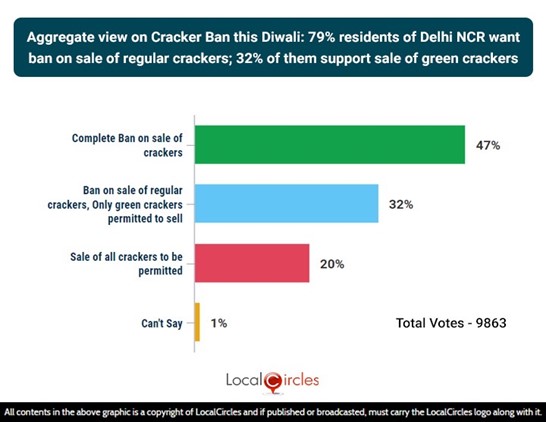 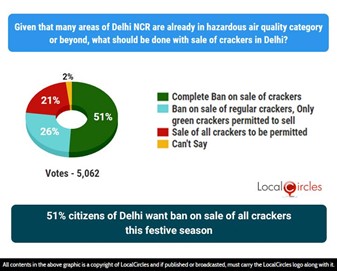 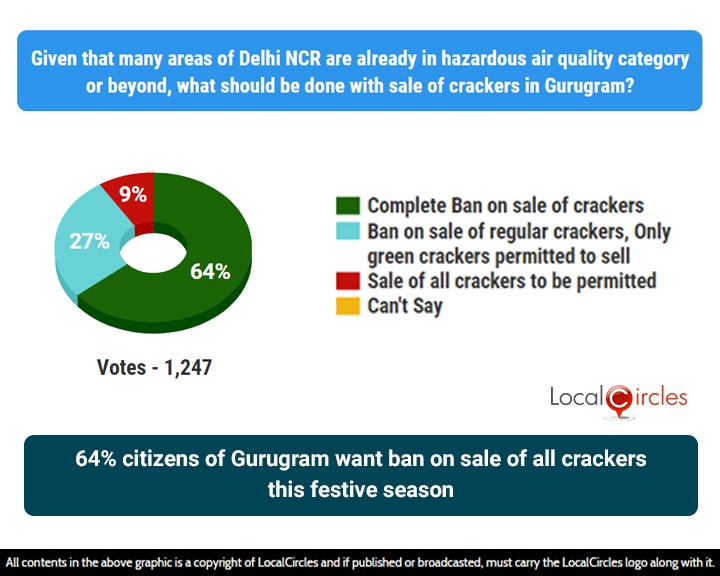 25% citizens of Noida want ban on sale of all crackers this festive season; 75% want green crackers to sell 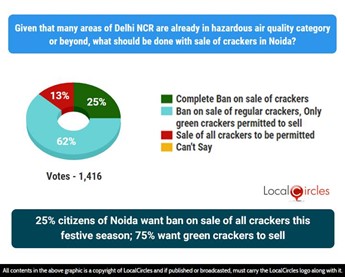 36% citizens of Ghaziabad want ban on sale of all crackers this festive season; 64% want green crackers to sell 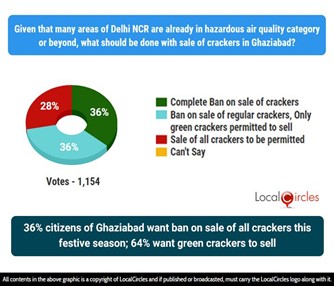 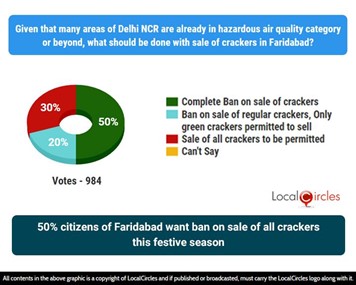 Overall, it seems that increasing number of residents of Delhi NCR are coming to the realisation that they can have little affect on stubble burning or vehicular pollution, but cracker burning is something they can restrain from and most are willing to do it.

On October 15, 2020, LocalCircles published the findings of its first air quality survey that said that 65% households in Delhi-NCR have one or more individuals who have started experiencing pollution-related ailments. The survey also pointed out that only 22% citizens in the region believe that Central and State Governments are working on reducing pollution in the last 12 months. This latest LocalCircles survey further throws light over the continued lack of apathy from agencies responsible to implement GRAP rules in Delhi, Gurugram, Noida, Faridabad and Ghaziabad and the need for authorities to get more active in ensuring that GRAP rules are being enforced.

With Delhi already experiencing its 3rd wave already and daily cases of COVID-19 cross 5000 in the city, the threat is imminent if medical experts are themselves worried about the combination of COVID and hazardous air. Some have even made a prediction of 15,000 daily cases in Delhi alone and increase in death rate due to the combination of virus, polluted air, colder weather and increase in social interactions due to festivals. The key here is for people to have self-control and for state and local Government agencies to up GRAP enforcement on the ground and ensure they only give licenses for sale of green crackers this year. 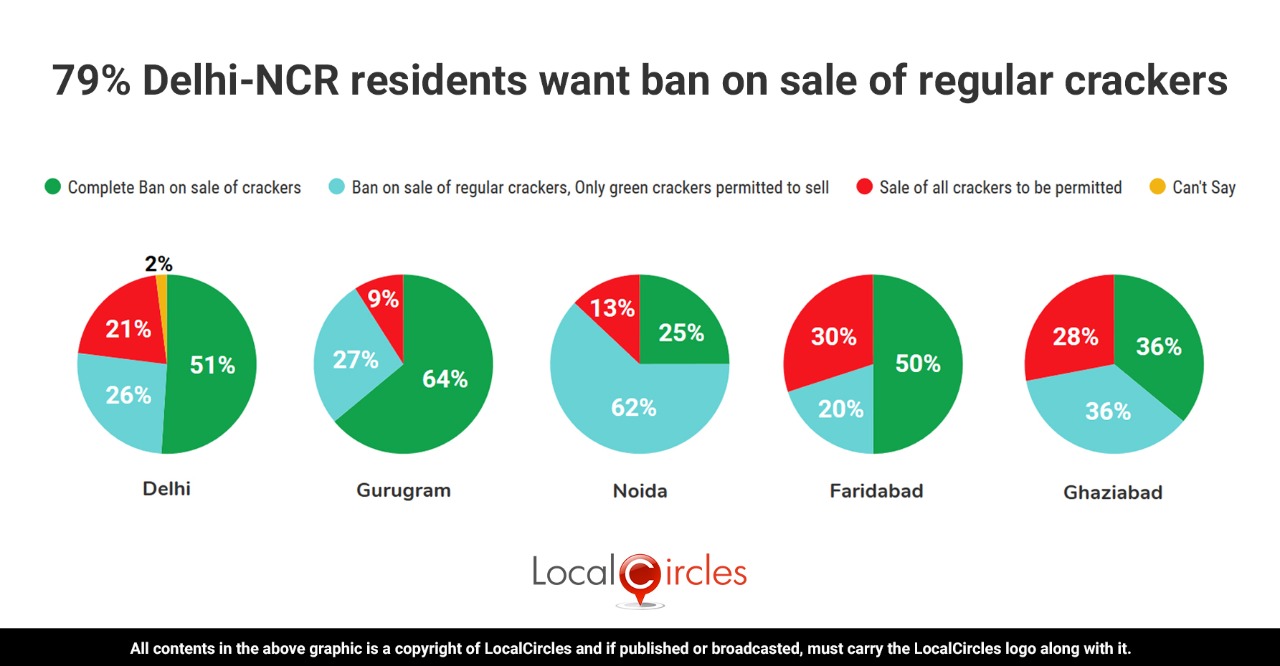 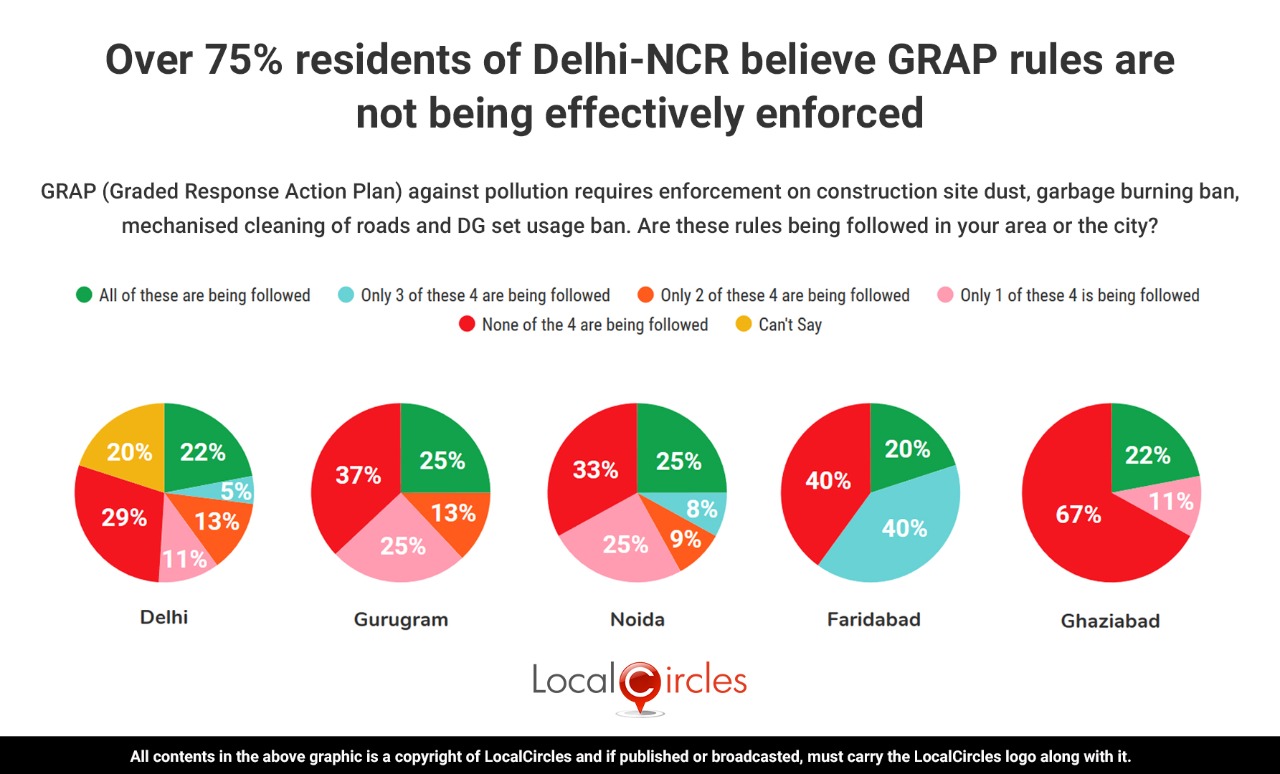