October 15, 2020, New Delhi: It is that time of the year again which the residents of Delhi NCR dreadfully fear. As the country fights COVID, the next 30-45 days are set to bring in toxic air from the neighbouring states of Punjab, Haryana and Uttar Pradesh where many farmers have already started stubble burning to get the field ready for the next crop. Pollution due to rampant farm stubble burning combined with the regular vehicular and industrial pollution leads to AQI levels of 1000 each year in Delhi NCR. The air quality of Delhi has already gone down to the ‘very poor’ level for the first time in this season and to “severe” level in a few areas of the national capital. An AQI between 0 and 50 is considered 'good', 51 and 100 'satisfactory', 101 and 200 'moderate', 201 and 300 'poor', 301 and 400 'very poor', and 401 and 500 'severe'. NASA's satellite imagery showed approximately 700 farm fires earlier this week in places like Amritsar, Patiala and Firozpur in Punjab and Ambala and Kaithal in Haryana.

To get a first-hand understanding of what people have started experiencing since late last week, what their plan is to cope up and efforts of the Government to reduce pollution, LocalCircles conducted its first survey this year on the subject which received over 15,500 responses from people residing in Delhi, Gurgaon, Noida, Ghaziabad and Faridabad. 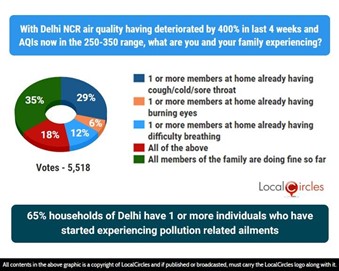 This clearly shows that 65% households of Delhi have 1 or more individuals who have started experiencing pollution related ailments. The consolidated numbers show that 47% people are facing cold, cough or sore throat issues, 26% are witnessing burning eyes while 30% are facing breathing difficulties. 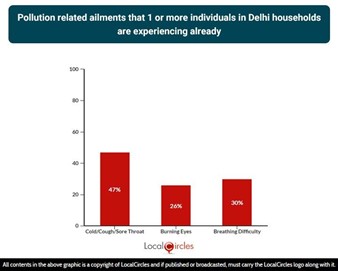 Many doctors and hospitals in the city have also started reporting higher number of cases of patients with breathing difficulties. People with pre-existing respiratory or pulmonary conditions, when exposed to poor air quality are more likely to develop complications that could make them more vulnerable to infectious diseases like Coronavirus.

Only 12% citizens of Delhi NCR will use air purifiers to reduce impact of pollution; a large majority will just live with it, increase intake of immunity foods and drinks 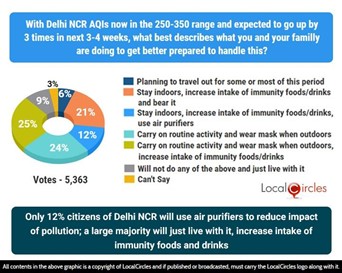 The results of this survey show that only 12% citizens of Delhi NCR will use air purifiers to reduce the impact of pollution; a large majority will just live with it and increase the intake of immunity foods and drinks. Increasing intake of warm fluids, adding black pepper, turmeric and other spices or ayurvedic remedies is something that many people do during this time of the year.

This year, the Delhi government has also launched an anti-air pollution campaign called “Yuddh Pradushan Ke Viruddh' under the direct leadership of Chief Minister and Environment Minister. The Central Government in its list of initiatives in last 6 years to reduce Delhi NCR pollution counts construction of Eastern and Western Peripheral Expressways, introduction of BS-VI vehicles, shutdown of Badarpur plant and providing stubble cutting machines worth INR 1400 crores to Punjab farmers. 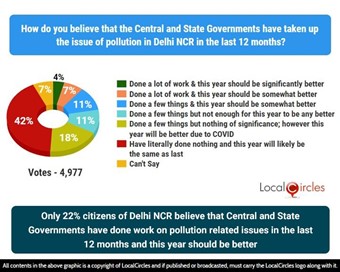 This means only 22% citizens of Delhi NCR believe that the Central and State Governments of Delhi, Punjab, Haryana and Uttar Pradesh have done work on pollution related issues in the last 12 months which will lead to lower pollution this year. Last year several measures were discussed among citizens including ensuring timely electricity and hence water supply to farmers in the different states, enabling stubble pick up service, making seeders available at community or panchayat level, etc.

The Delhi Government has also announced the implementation of Graded Response Action Plan from 15th October, which will include steps like banning of diesel generators, deployment of anti-smog guns and spraying of water at construction sites etc. Govt also said that 10-metre thick tin sheds should be installed in all construction sites to contain dust, covered with green sheets with agencies required to sprinkle water at the area and outside the area too.

The director of AIIMS has said that the rising pollution levels might have a direct effect on COVID cases, and the numbers might see a jump. Air pollution causes inflammation in the lungs and SARS-COV-2 also predominantly affects the lungs causing inflammation. With Delhi NCR daily COVID cases hovering around the 4000 mark, the residents of Delhi NCR will have to exercise extreme caution to protect themselves. The only thing they can hope from Central and State Governments is strong enforcement on the ground in the 3 states so no new farm fire starts. Whether there is the will and the capability, remains to be seen.