The purpose of art is to bring oneself closer to divinity by channeling the energy resources inherent in all human beings. The two young enthusiastic dancing couples Chaitra & Ananth Vikram are dancers, choreographers & directors in their own right dedicated to dancing excellence. They have carved a niche for themselves on the contemporary dance scene with a fine blend of classical rigour. The couple have individuated themselves by a passion for perfection, vibrant nritta and a sophisticated sense of Abhinaya. For them, ‘Dancing is the poetry of foot’.

Uniquely, Chaitra and Ananth had their training experiences with various eminent figures in different styles of dances namely Bharatanatyam, Salsa, Contemporary, Martial arts(Kalari), etc. and they are cascading their experiences into dazzling & innovative choreography.

They head up their own upcoming creative forum “Shailusham Arts & Creations” (SAC) as artistic directors. Their productions & performances have taken to the stage in various festivals such as Nimapara World dance festival, etc and have received high accolades for the same.

Chaitra is an accomplished Stage, Television & Film Artist who has undergone intensive training in various dance styles. Chaitra started to dance from the age of 5 and took to formal training from the age of 10. She was honored as best dancer of the year by Honorable Governor of Karnataka for her splendid performance in a western dance style.

She received her initial training in Contemporary, western styles (Salsa, Jazz, ballroom, Texas), free style dance, Dance Aerobics, Various Indian Folklores under her Guru Prasanth (Viva Dance group) and Stephen from Bombay. Also she had her initial lessons in Bharatanatyam under Guru Padmini and her advance training from her life partner Ananth Vikram. She had been awarded as ‘Choreographer of the Year’ for her Direction by FEMINA BLOCKBUSTER magazine in Bombay.

Chaitra has also experienced the vocabulary of the Martial Art KalariPayattu. As a teenager, she had accomplished & featured in various Kannada films like “Deepavali” (Acted with one of the legend actor Dr.Vishnuvardhan) and Mega Serials namely “Silly Lalli”, “Paapa Paandu”, “Chaduranga”, “Yadva Tadva”, etc.

She is an architect by Qualification. However, Chaitra is passionate about educating Special & mentally challenged children. Also, She is educating and nurturing various young talents in the field of Indian Cultural Heritage at several esteemed institutions namely JGI (Jain Group), Shantiniketan, etc..

Ananth’s art footage started when he was 6 years old. He took his first steps in Bharatanatyam under the tutelage of Guru Smt. Sandhya Keshava Rao & advanced training under Guru Satyanarayana Raju & Nirupama Rajendra. He has secured 2nd Rank in the Exam conducted by the Karnataka Board. Also, he started his Carnatic Vocal career under the able guidance of Late Guru Smt. Prasanna Kumari Satyam & currently perceiveing his advanced training under Vid. Anoor AnanthaKrishna Sharma.. Being interested in Yakshagana, he started his classes in Yakshagana under the scholarly guidance’s of Guru Sri S.N Panjaje & Shivaram Bhat. His debut performance was a unique one which included all the 3 performances (Bharatanatyam, Carnatic Vocal Recital & Yakshagana) on one stage in Town Hall, Bangalore in 1996 at the age of 10.
Ananth has also experienced the vocabulary of the Martial Arts like KalariPayattu. As a teenager, he joined the dance-drama company of 'Prabhat Kalavidaru’ playing various major roles in their traditional dramas. . He has worked with several Gurus like Dancer Duos Nirupama & Rajendra, Guru Smt. Kalamandalam Usha Datar, Guru Dr.Sanjay Shantaram,Guru Satyanarayana Raju,Guru Smt. Vyjayanti Kashi, Madhurai R Muralidharan, Guru Smt. Manjula Paramesh, Vidwan Kiran Subramanyam, Pulikeshi Kasturi to mention a few.

Being a Carnatic vocalist, he has performed solo vocal concerts in various festivals namely, Mantralayam for Aradhana Celebrations, Udupi Sri Krishna Temple on the occasion of Janmashtami, Various Vinayaka Chaturthi celebrations to name a few..Also as a recording & dubbing artist, he has rendered his voice for various studio recordings for dance dramas, Public CDs & Live Dance dramas..

Ananth holds a degree in Engineering. He is a Senior Software Engineer(B.E) by profession currently employed with ERICSSON. Also, he is pursuing his Masters (M.A) in Sanskrit from KSOU, Mysore.
5.00 / 5 1 Reviews 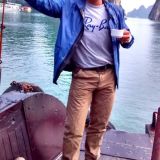