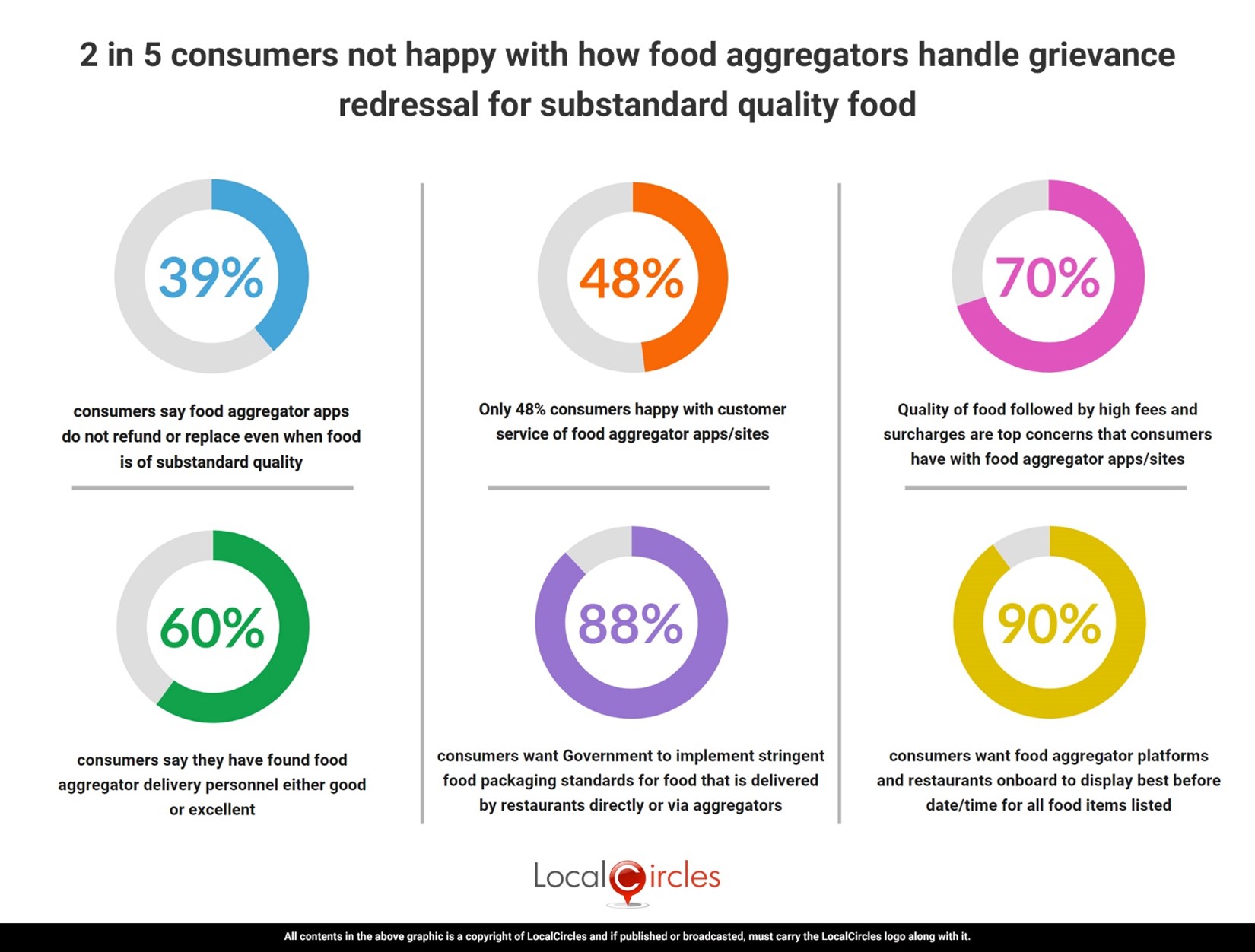 September 24, 2021, New Delhi: Ordering food online via food aggregators has been one of the services that have become a weekly or even a more frequent affair for many urban households in India since the mid-last year. The food aggregators could not function in the early part of the pandemic in 2020 due to lockdowns and restrictions, but during the lockdown induced by the 2nd wave of the outbreak, the services were permitted to operate by almost all states across India. Food aggregators like Swiggy and Zomato have reported a spike in demand from all locations it caters across India, especially tier 2 and tier 3 towns. For instance, when the weekend lockdown was in effect in Uttar Pradesh and if anyone needed restaurant food, the only way was to order it through food aggregators. However, with the increase in demand, consumer grievances have also increased concerning food hygiene and quality standards.

Consumers via LocalCircles have reported several instances where they received stale, expired or poorly packaged food when they ordered food via food aggregator apps. Several reports suggest that despite reporting a bad experience, the standard customer service response was to deal with the food with no provision for a refund or credit. The most that consumers could do is rate the restaurant poorly on the particular food aggregator platform.

To better understand issues of consumers with online food aggregators of India, LocalCircles has conducted an extensive study which received more than 63,000 responses from consumers residing in 307 districts of India. 68% of the participants were men while 32% were women. 44% respondents were from tier 1 districts, 33% from tier 2 and 23% respondents were from tier 3, 4 and rural districts. The study focussed on understanding key concerns of consumers, how customer service of food aggregators was functioning, along with concerns surrounding food quality, behaviour of food delivery personnel and what could be done via standardisation and information display to make the service more consumer-friendly.

The first question in the study asked consumers about their most common experience of how food aggregator platforms have handled their grievances in recent times when they felt that the restaurant food delivered via them has been of substandard quality. In response, 39% of consumers said their “money is not refunded nor is food replaced”. Breaking down the poll 18% said “money is refunded promptly”, and 10% said “food is replaced promptly”. 33% of consumers couldn’t say. The findings indicate that for 1 in 3 consumers who ordered food, the experience has been mixed. This question in the study received 9,239 responses. 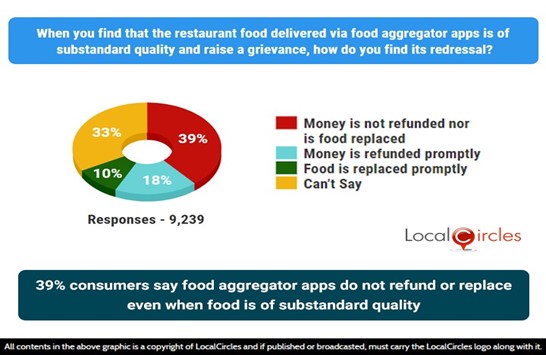 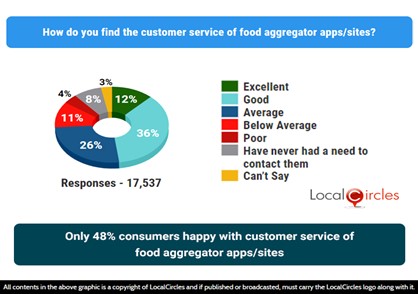 Consumers generally contact customer service of food aggregator platforms when their order is late, the food is poorly packed/leaking or the food received is of substandard quality or not what the consumer expected. According to consumers, in many of these cases, the handling by customer services falls short. Consumers also said that many times they do not want to take the effort of chatting with someone or calling someone when the experience is mediocre, and they just rate the experience as 1-3 star. Rarely does it happen that the food aggregator customer service contacts them or makes a refund to their wallet or source of payment.

The next question in the survey asked consumers about their top concerns when ordering food via online food aggregators. In response, 41% of consumers said their top concern is the “quality” of the food, 29% said “high fees and taxes/surcharges”, and 4% said “timeliness”. Furthermore, 23% of consumers said they “don’t have a concern”, while 3% did not have an opinion. On an aggregate basis, “quality of food” followed by “high fees and surcharges” are the top concerns that consumers have with food aggregator apps/sites. This question in the study received 9,469 responses. 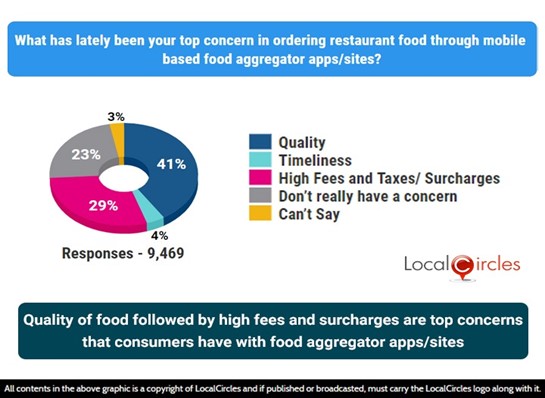 For small orders of INR 200, the total amount, adding a delivery fee, taxes and surcharges, can be anywhere between INR 300-350 based on the distance between restaurant and consumer. That for some consumers is a 50-75% markup on the price of the food sold by the restaurant. With the Government moving the responsibility for tax collection and deposit away from the restaurant to the food aggregator, the levying of these taxes and surcharges will become more streamlined and consistent leading to higher prices for the consumer. The food aggregators have been spending on customer acquisition over the last few years and giving discounts to consumers, either by securing discounts from the restaurant, funding it themselves or a combination of both which makes the cost of delivered food the same as that of the restaurant’s retail price. If that does not continue, smaller value transactions of INR 500 or lower are likely to become unviable negatively impacting revenues of these platforms. Order value in tier 2 or tier 3 towns exceeds INR 500 in only rare cases.

The delivery personnel are a key driver of the entire online food delivery chain who makes sure that the food ordered reaches the customer at the right time and in good condition. Food aggregators have been making efforts towards ensuring that they are well-trained, polite and hygienically dressed following all the protocols though concerns persist about them being overworked in some cases. The Government has also been working on recognising such workers as gig workers and defining a set of benefits that must be granted to them by the food aggregators. 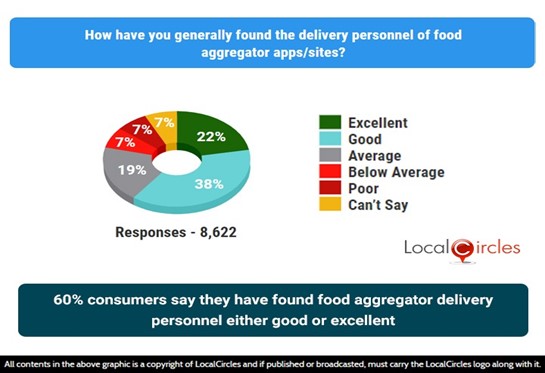 The Food Safety and Standard Authority of India (FSSAI) has prohibited the use of recycled plastic and newspaper in food packaging. Furthermore, the food regulator has also directed that the food packaging materials must comply with the Indian Standards (IS). However, consumers on the LocalCircles platform have reported some aggregators or food outlets not complying with the food packaging standards. For instance, hot dishes packaged in single-use plastic containers can be extremely harmful as studies have found out that certain chemicals in the plastic can leach out into the food and beverages, which have several health concerns including some severe ones too. Some consumers also expressed how some restaurants even heat food in the microwave while it is packed in non-microwavable plastic containers. Some consumers also listed how the FSSAI certification process on the ground is not effective always and not followed by the district food inspectors when auditing or ensuring that restaurants follow safe food handling practices.

Taking cognizance of the same, the next question in the survey asked consumers if the Government should implement stringent food packaging standards for all restaurants delivering food via food aggregators and otherwise? In response, the majority of 88% of consumers said “Yes”. Only 4% said “No”, and 8% “couldn’t say” as they do not use food aggregator apps/sites to order restaurant food. This question in the study received 9,245 responses. 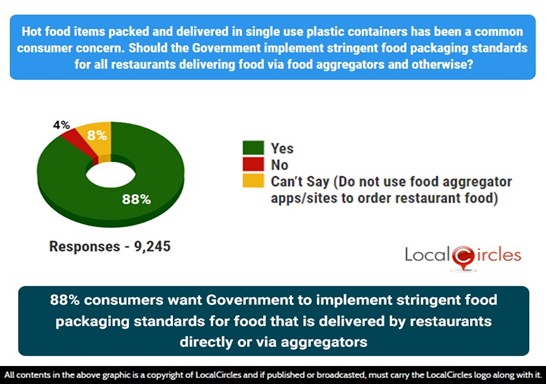 The Food Safety and Standard Authority of India’s (FSSAI) order, effective since June this year, has said that containers of non-packaged or loose sweets at shops should also display the date of manufacturing of the product, along with the date best to consume before it becomes stale. As retailers often try to offer discounts on products close to their "best before" date. Therefore, consumers must be aware of the products they are buying and how far is it safe to consume the same. On packaged food products as well after the introduction of Packaged Commodity Rules Amendment 2017, it was made mandatory that eCommerce sites must display MRP and best before date for human consumption products. Subsequently, many of the platforms like Big Basket, Flipkart, Amazon etc. started complying with these rules making this information available to consumers. Consumers have been demanding that the best before date/time must be displayed on food aggregator platforms on a mandatory basis as that will make food delivered via this channel safer.

The next question in the study asked consumers if it should be made mandatory for restaurants listed on online food aggregator platforms to display the best before date/time of all food products being sold? In response, 90% of the consumers said “Yes”, and only 7% “No”, while 3% did not have an opinion. This question in the study received 9,785 responses. 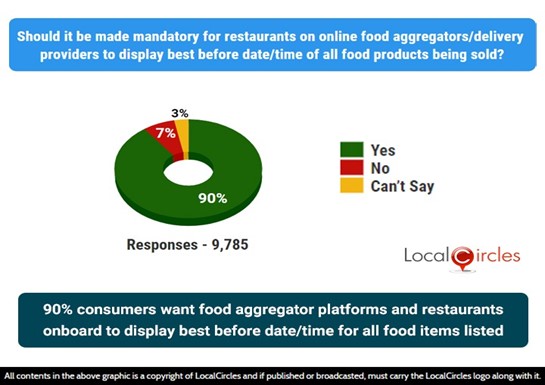 In summary, while food aggregator platforms have seen a huge spike in demand and business during the pandemic, especially during the second COVID wave in India, it has also led to an increase in consumer grievances with the platform. With 2 in 5 consumers rating that the platforms are not handling their grievances effectively are a red flag and something that the platform must work upon immediately. Only 48% of consumers surveyed are saying that they are happy with the customer service of the food aggregator platforms, which is a revalidation of the same. The top issues according to consumers are food quality followed by high fees and surcharges. For several years now, the platforms have been spending on marketing and giving discounts to consumers, either by securing discounts from the restaurant, funding it themselves or a combination of both with the hope to build a habit. However, if that funding stops, small value orders up to INR 500 are likely to pinch the consumer leading to revenues getting impacted.

60% of consumers are happy with the behaviour of the deliver personnel which is a positive rating, with only 14% rating them poorly as people realise that they have been a boon during the pandemic working hard and delivering orders. However, to improve food quality and trust in the platforms, consumers are keen that more information be displayed about the food expiry date/time and common standards be followed on how food is packaged.

All in all, the food aggregators here will have to find a way to deliver information that consumer desires, better grievance redressal and well-packaged food, compensate delivery personnel fairly and do this while ensuring that the service stays affordable for small-ticket orders of INR 200 or less. Other than burning investor capital, the only way out is for the food aggregators to secure higher discounts from restaurants on a sustained basis such that the restaurants have better capacity utilisation and profitable demand generation with the food aggregators than without them.

The study received 63,000 responses from consumers residing in 307 districts of India. 68% of the participants were men while 32% were women. 44% respondents were from tier 1 districts, 33% from tier 2 and 23% respondents were from tier 3, 4 and rural districts. The study was conducted via the LocalCircles platform and all participants were validated citizens who had to be registered with LocalCircles to participate in this survey.