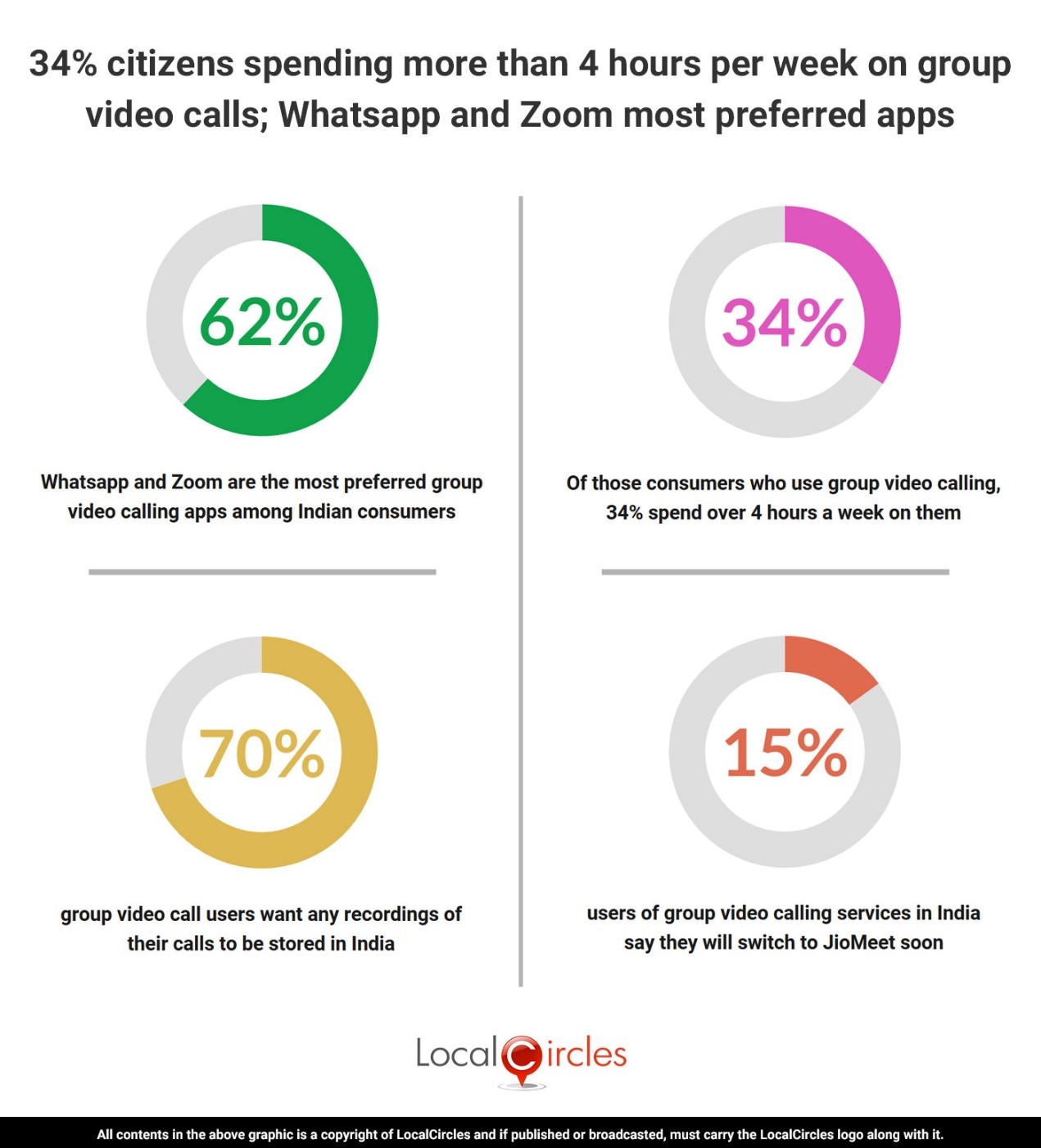 August 25, 2020, New Delhi: In the last 6 months, group video calling has come to the rescue of tens of millions of people stuck at home due to the COVID-19 outbreak and all the national and local lockdowns. Be it attending office meetings or catching up with the loved ones, people have been using group video conferencing and calling like never before. Some of the popular group video calling apps used in India include Zoom, Whatsapp, Microsoft Teams, Google Meet and Skype.

To understand what platforms are being used by consumers in India, how much time they are spending each week on group video calling apps, their openness to adopting new Indian platforms and whether they care about where there video recordings and data is being stored, LocalCircles conducted a detailed survey in which over 35,000 responses were received from individuals residing in 247 districts of the country. 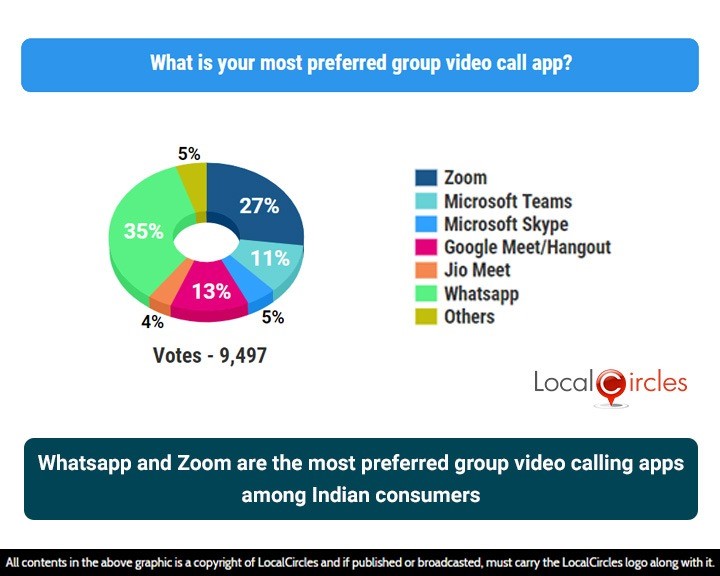 The findings clearly show that currently WhatsApp and Zoom are the most preferred group video calling apps among Indian consumers. WhatsApp launched ‘Messenger Rooms’ on its web platform which allows up to 50 people to get onto a video call with no time limits. This feature is now available on android and iOS apps of whatsapp as well. Applications like Microsoft Teams and Google Meet are being used by many schools for their online classes. Reliance Jio recently launched the Jio Meet app with many features similar to Zoom.

In the next question, the idea was to gauge how much time Indian consumers are spending each week on group video calling apps. When asked, 37% said they spend less than 1 hour per week on group video calls, while 28% said 1-4 hours. 14% said 4-8 hours, another 14% said 8-16 hours and 3% said 16-24 hours, while another 3% said they are spending more than 24 hours per week on such apps.

While for many, the video calls are limited to catching with family and friends on a Sunday, for some however, their work now involves 6-8 hours of group video calls each day. Students, especially those in senior school are reportedly spending 10-12 hours of time on group video calls with school classes, afterschool tuitions and group projects.

Of those consumers who use group video calling, 34% spend over 4 hours a week on them 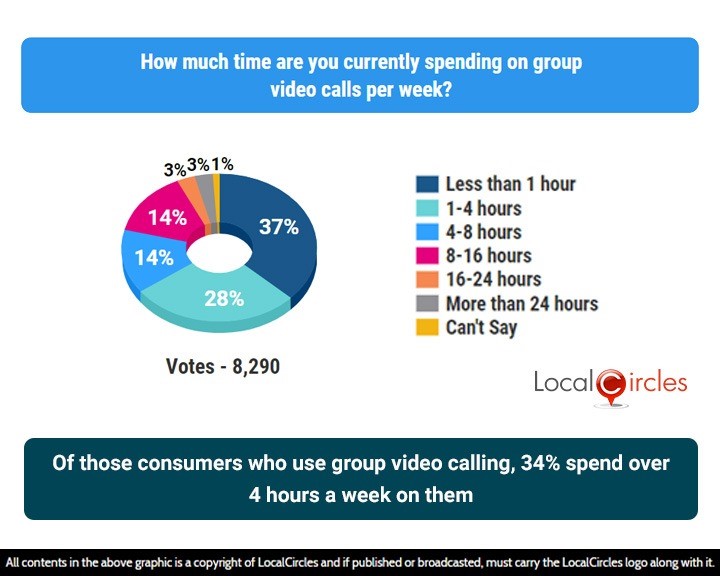 The findings indicate that of those consumers who use group video calling, 34% spend over 4 hours a week on them. This is a significant change both from the standpoint of usage pre COVID-19 when group video calls were limited to use by some corporates and small businesses to connect with their remote or global teams.

Consumers in India are slowly becoming aware about data protection and privacy. With the Personal Data Protection Bill awaiting parliament’s approval and rules being drafted for Non-Personal Data handling, it will soon become important where the data for video calls is being stored. Platforms like Zoom provide facility of recording the video call so it can be made available for later use or for record keeping purposes. Consumers were asked if all platforms providing group video calling services and storing call recordings of Indian citizens be required to store the same in India. 56% respondents said yes and said they will switch providers if they don’t comply while 14% said yes but they won’t switch providers even if they don’t comply. 12% said platforms should not be required to do this while 16% said it does not matter to them. 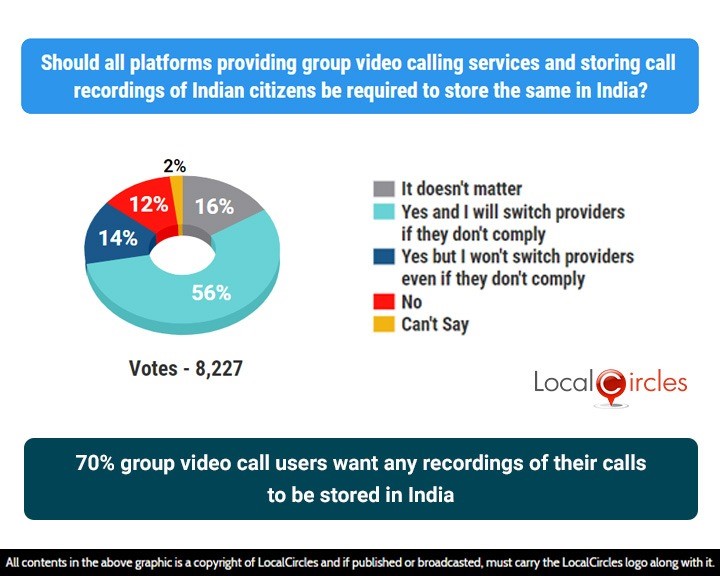 The poll result shows that 70% group video call users want any recording of their calls to be stored in India. After the India-China border mishap in the 2nd week of June, 59 Chinese apps were banned by the Indian Government over safety and privacy issues. These included Byte Dance’s popular app Tiktok, Mi Video Call, social networking app Helo and Tencent’s messaging platform WeChat, among others. 47 more ‘clone’ Chinese mobile apps were banned in the last week of July. Following the ban, many India-based applications have witnessed a huge surge in downloads.

When asked what was preventing them to switch from Zoom, WhatsApp, Teams etc. to a platform like Jio Meet, 25% said the are happy with what they are using while 27% said the meeting host uses the above apps and they are generally an attendee. 19% said they don’t trust Jio Meet while 3% said it lacks features and 4% said it is difficult to use. 15% said they will switch to Jio Meet soon. 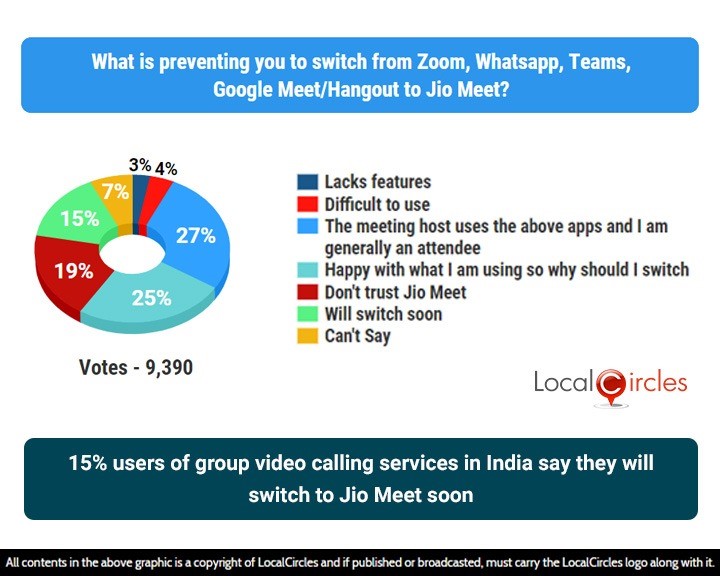 The Jio Meet app claims it can be used to make high definition audio and video calls and allows up to 100 people to join in a single call without any call duration limits. This app has been launched at a time when Zoom’s popularity has exploded due to the ongoing pandemic, and it won’t be wrong to say the Jio Meet is aiming to be India’s Zoom. However, with Zoom’s zooming market cap, and the resources of Google, Facebook and Microsoft, one can expect all these companies to only improve their group video calling capabilities and features. With many organizations already having announced work from home for the next few months, concerns around re-opening of schools and demand from parents for continuing online classes instead and even when offices and schools open up, they operating in both virtual and real mode are some indicators that the overall usage of group video calling apps will continue to rise in the coming year.